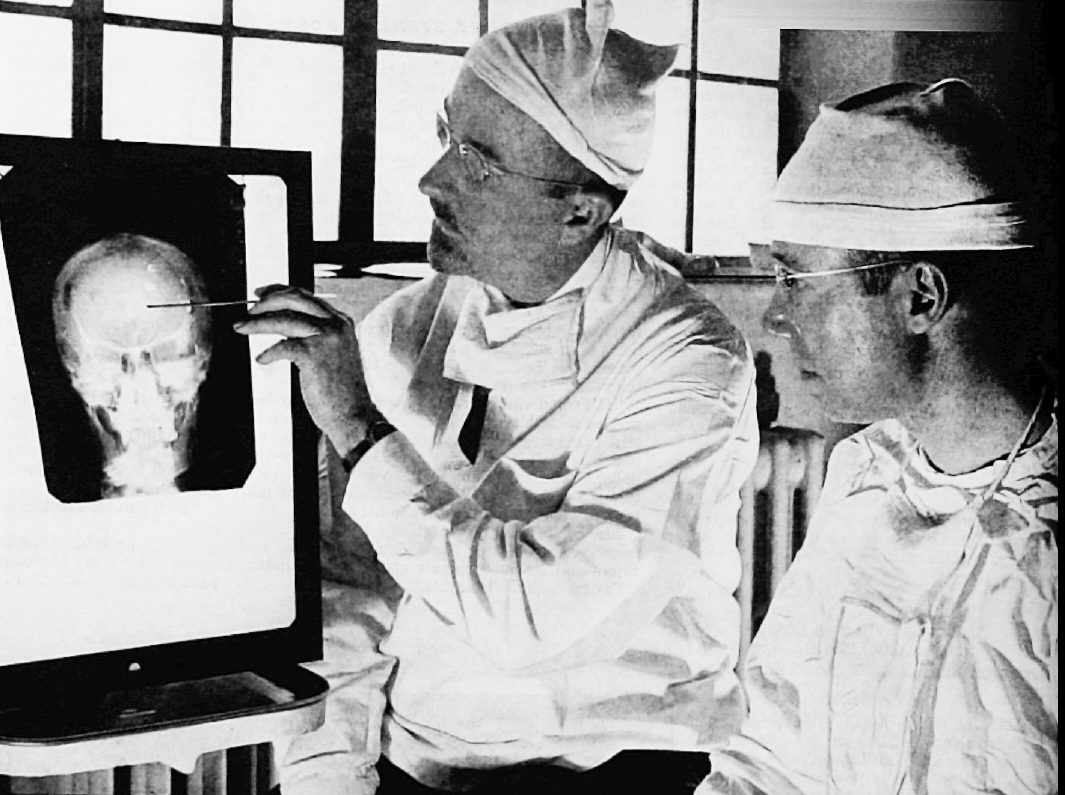 "Dr. Walter Freeman, left, and Dr. James W. Watts study an X ray before a psychosurgical operation. Psychosurgery is cutting into the brain to form new patterns and rid a patient of delusions, obsessions, nervous tensions and the like. (Wikipedia)
Healthcare System

The Sordid Past and Brighter Future of Brain Surgery

Brain surgery has a dark history that has given way to breakthrough treatments
BY Peter Weiss TIMEApril 4, 2022 PRINT

PT is a 78-year-old man who developed debilitating essential tremors in which his arms and hands would constantly shake. It got to the point where he couldn’t write his own name or even hold a cup of coffee. His neurologist tried different medications but they had little effect—other than giving him serious side effects.

His neurologist was a sharp and well-studied physician who referred him to a neurosurgeon to perform deep brain stimulation surgery (DBS). DBS involves the delivery of electrical stimulation to deep brain structures via implanted electrodes connected to an implanted generator (in the chest). Electrodes are run from this generator into the area of the brain that initiates the tremors, which are then connected to a power pack. There is a wireless receiver that can control the amount of stimulation and alleviate most if not all of the shaking.

DBS has become more routine over the past two decades, especially in patients with Parkinson’s disease. It can also be used for many essential tremors. A 2004 review published in Cell and Tissue Research stated, “The success of the therapy largely depends on the selection of the appropriate candidate patients and on the precise implantation of the stimulation electrode.”

There are now ablation therapies ​​that use extremely high or low temperatures to destroy abnormal tissue or treat other conditions. These can sometimes reduce or eliminate such tremors, but DBS still seems to be a mainstay surgery with good success.

The first DBS surgery was performed in 1987 by French neurosurgeon Dr. Alim-Louis Benabid, although it wasn’t until 1998 that DBS surgery was accepted as a treatment of choice. The history of brain surgery, however, is not so noble. The technique of stimulating or even severing nerves within the subcortical regions of the brain was begun in the 1950s to “treat” psychiatric illness, pain, and violent tendencies.

We have all heard of the frontal lobotomy and shiver with horror when we envision those poor souls. The procedure was pioneered by Portuguese Dr. Igaz Muniz in 1936, a neurologist who performed the first lobotomy with the aid of neurosurgeon Dr. Almeida Lima.

Dr. Walter Freeman popularized frontal lobotomies in the United States in the 1940s. In 1942, he published the results of his first 200 patients, writing, “63 percent were improved; 23 percent had no improvement; and 14 percent were worsened or succumbed to their surgery.”

That same year, the Journal of the American Medical Association (JAMA) published an editorial “supporting the basis for the procedure and the indications for lobotomies.”

The initial surgeries were barbaric. The patient was first shocked into a coma, then the surgeon would hammer a sharp instrument similar to an ice pick through the skull just above the eye sockets, severing the nerves connecting the frontal lobe to the emotion-controlling centers of the inner brain.

Freeman developed a technique that didn’t require general anesthesia. The goal of a lobotomy was to calm uncontrollably violent or emotional patients. The strange thing is that it “worked,” according to Freeman and others like him.

Besides the surgery itself, the side effects were horrendous, including incontinence and vomiting. As barbaric as this procedure was, it was performed way too often. From 1937 until 1967, tens of thousands of people underwent lobotomies, which produced personalities that were lethargic and unable to control impulses. There was also a 25 percent mortality rate from the surgery. The discovery of lithium in 1949 improved the outlook for people suffering from serious mental illness, but sadly, lobotomies were still performed for years to come.

The last procedure performed by Freeman was in 1967, for the third time on the same patient, Helen Mortensen, who died of a brain hemorrhage soon after. As a result, Freeman was finally banned from performing any surgery.

This sort of surgery was actually performed many centuries earlier with a procedure called trepanation. Trepanation may actually be the first known documented surgical procedure. This is where a hole is made in the skull, by removing a portion of the skull, now commonly called a burr hole. This was done as early as the Neolithic period (4500 B.C.).

Trepanation is still performed today to release deadly pressure on the brain, which often occurs due to traumatic head injury with a subdural hematoma (bleeding in the brain). Fortunately, the technique has dramatically improved since the caveman days.

Neuroscience has evolved dramatically over the past 50 years, with absolutely amazing results, such as in deep brain stimulation surgery for life-altering essential tremors and such. DBS has also been considered for treatment in resistant depression. A systematic review and meta-analysis of deep brain stimulation for depression published in the journal Depression and Anxiety in 2018 concluded that the treatment may have promise but is still experimental.

Epilepsy is another major disease that affects roughly 50 million people worldwide, with about 20 percent being drug-resistant.

A 2017 study published in ​​Epilepsia showed deep brain stimulation reduced seizures among those suffering from drug-resistant epilepsy by 46 to 95 percent among half of all patients studied.

My friend, PT, had a remarkable result from his DBS. He couldn’t wait to show me the before and after video of him writing his name. The device is monitored by his neurologist, as well as PT himself, who with the use of an iPhone-like device can turn on the DBS pulses, adjust them, or turn them off. This was truly a life-altering procedure for PT.

It’s hard not to think of the thousands of people’s lives ruined by “doctors” such as Freeman and the use of lobotomies. There are, however, great successes now in neurosurgery that have truly saved and improved the quality of life of thousands of people.

Neurosurgery sure has come a long way from the frontal lobotomy.