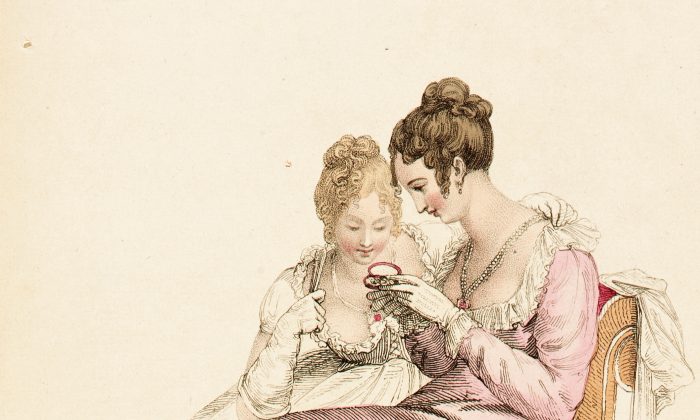 In Jane Austen’s “Sense and Sensibility,” two sisters demonstrate opposite tendencies: One shows prudence and the other poetic feelings. "Evening or Full Dress," a fashion plate for "The Repository of Arts," June 1, 1810, by Rudolph Ackermann. Hand-colored engraving on paper. Gift of Charles LeMaire, Los Angeles County Museum of Art. (Public Domain)
Literature

The ‘Sense and Sensibility’ in Jane Austen’s Novel

Everyone knows a drama queen. In Jane Austen’s “Sense and Sensibility,” Marianne Dashwood happily plays the role, and wonderfully demonstrates how the fashion for sensibility at the time is taken to excess. Marianne’s heart is her compass, and she willfully goes wherever her feelings and flights of fancy take her, mostly in her mind. Needless to say, it nearly kills her. Conversely, her sister Elinor, who takes us through the story, is anchored in rationality and self-restraint.

Maureen Stiller, honorary secretary of The Jane Austen Society of the United Kingdom, shares a little of how Austen demonstrates in her 1811 novel, “Sense and Sensibility,” the difference between living with excess emotion and sentiment, and living with a good dose of decorum and self-restraint.

The Epoch Times: Please tell us about Jane Austen’s “Sense and Sensibility.”
Maureen Stiller: In “Sense and Sensibility,” Marianne, the younger sister of the heroine, Elinor, is charming and attractive but immoderate in all her feelings and actions (her interpretation of sensibility). She has no patience for anyone who does not enter into all her tastes and feelings, and sacrifices politeness for the sake of expressing her opinions, without attending to the circumstances or the feelings of others. She is jilted by her sweetheart, John Willoughby, but continues to wear her heart on her sleeve, moping around, eating and drinking little, to the distress and grief of everyone in her family. Yes, you are allowed to get upset when someone jilts you. That’s fair enough, but the point is that she’s not guarding her feelings, and she’s upsetting everyone else in the process because they can see she’s upset, and they can’t do anything about it because she will not control her own feelings.

By contrast, the heroine, Elinor, is under considerable strain by the erratic behavior of Edward Ferrars, the man she loves. He is snubbed by his mother and sister, and is also taunted by a guest in the adjacent house, who suggests that she, Lucy Steele, is the favored one of Edward. Out of a sense of duty to her family and society, to keep her mother and sister from further distress on her behalf, and to keep her dignity in front of Lucy, Elinor not only endures all this in silence, but is driven, with difficulty, to practice politeness and attentiveness to those around her, to compensate for the negligence of them by Marianne, and to divert them from guessing her real feelings.

She is constrained further to hold her silence because she then has to nurse Marianne who, by her own neglect, has declined into near-death.

Marianne does recover and reveals her penitence to her sister. Some of her quotes, pieced together, make that clear:

“I saw that my own feelings had prepared my sufferings, and that my want of fortitude under them had almost led me to the grave. My illness, I well knew, had been entirely brought on by myself by such negligence of my own health … what peculiar misery should I have left you, … You, who had seen all the fretful selfishness of my latter days. … Whenever I looked toward the past, I saw some duty neglected, or some failing indulged. Everybody seemed injured by me. The kindness, … I had repaid with ungrateful contempt. … to every common acquaintance even, I had been insolent and unjust; with a heart hardened against their merits, and a temper irritated by their very attention. … Did I imitate your forbearance, or lessen your restraints, … of general complaisance or particular gratitude … did I turn away from every exertion of duty or friendship.”

The Epoch Times: What exactly is sensibility?
Mrs. Stiller: In Jane Austen’s day, there was “the cult of sensibility.” As people became more refined and their tastes became more educated, it was considered of value to have sensibility, which meant that you entered into another person’s trials and tribulations, and therefore it was actually considered a moral value if you could do that. But of course, then there was a counterculture because everybody thought they were taking sensibility too far. And of course, this is where Marianne comes in, because she is taking sensibility much too far. She’s absolutely over-the-moon about poetry and can’t abide anybody who doesn’t appreciate things the same way that she does. She’s only 17 years old, but nevertheless she’s terribly, terribly romantic.

The Epoch Times: Can sensibility be likened to empathy?
Mrs. Stiller: Yes, they called it sensibility. Here’s a modern definition of sensibility as it was considered at the time:

“The most exquisite raptures known to mankind were supposed to flow from the ability to feel for the suffering of others, and to relieve it by acts of unselfish courage and generosity. This belief was linked to the growing fashion for sensibility, which gave rise to the theory that, even if you could offer no practical assistance, the mere ability to feel for another’s pain was a valuable characteristic, that somehow set you above the common, unfeeling herd—and was, in itself, a source of intense delight.”

This is from Carolyn D. Williams’s essay on “The Luxury of Doing Good: Benevolence, Sensibility, and the Royal Humane Society.”

So, sensibility is “I feel your pain”; that’s what it really is. Equally, it means that you could also indulge in all these sensual pleasures, which Marianne does.

The Epoch Times: What delights you about this book?
Mrs. Stiller: I’m not sure “delight” is a word I would use, to be honest, because there are just little bits in it that amuse me. For example, there’s a discussion between Elinor’s brother and his wife about how much money he should leave his sisters now that the father has died. And the discussion is such that after being so generous, his wife keeps giving him all sorts of excuses about why, at the end of the day, he’s only going to send them a goose for Christmas. It just shows how greedy some people are.

I’ll tell you a story. I was stewarding in Jane Austen’s house when a coach load of people came in and one lady came up to me and said, “Oh, yes, this is the real thing isn’t it?” I said, “Yes, yes, absolutely.” “Oh yes, I saw that film the other day, it was lovely,” she said. I think it was “Sense and Sensibility,” and I said, “Have you read the book?” And she said, “No.” I asked her if she was going to, and she said, “Oh no!” People have the film in their mind’s eye, and I don’t think that they want to read the book.

I always say, if you don’t know Jane Austen, that when you come to read her books—you either like them or you don’t. You either engage with a Jane Austen book immediately, or you think I can’t be doing this. I’m talking in terms of a layperson. An academic or a person with an academic background would read Jane Austen in a different way than you and I.

The Epoch Times: Is there anything else you’d like our readers to know about Jane Austen?
Mrs. Stiller: As we say in our talks, it’s not what to put into a talk. It’s what to leave out because there is so much to learn from the underlying text both in terms of social history, which is very much in the forefront once you know what it is, and also in terms of just some of the little expressions that make you laugh out loud and just catch you. All these pictures that come up in your mind from her descriptive terms—because actually, Jane Austen was very modest with her text—it was a different type of writing from anything that went before in that it is a very modern form of writing compared to her contemporaries. I think we can say that her text was a prototype for the modern language of the novel.