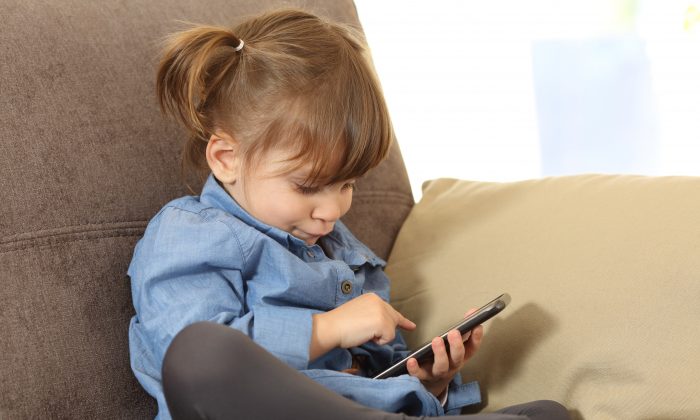 Kids today are using and owning cellphones at younger ages than ever before. While cellphones may be a great way to keep tabs on your children while they’re at school, at a friend’s house, or even at home while you’re away at the office, are cellphones really safe for children to be using all the time?

Many parents simply worry about their childrem spending too much time on their phones. And in fact, our society is developing an ever-increasing dependence on wireless technological devices. Some 50 percent of teens, for example, admit to feeling addicted to their phones, according to a 2016 Common Sense poll.

The penetration of the cellphone radiation into the brain of a child is deeper and greater.
— Ronald Melnick

Apart from technological addiction, however, there are very real safety concerns about how constant exposure to cellphone radiation might be affecting the physical, social, and psychological development of children and young people today. Holding a cellphone up to your ear allows up to 80 percent of the radiation emitted to penetrate up to two inches deep into your brain; for children, the effects might be even more pronounced.

“The penetration of the cellphone radiation into the brain of a child is deeper and greater,” said Ronald Melnick, a scientific adviser for the Environmental Health Trust. “Also, the developing nervous system of a child is potentially more susceptible to a damaging agent.”

Last November, the American Academy of Pediatrics issued new official recommendations urging parents to limit their children’s exposure to cellphones. But the research backing up claims of their harmful effects dates back much longer than that. In 2010, a study of children ages 8 to 17 found that even short-term exposure to electromagnetic fields, or EMFs—a type of radiation emitted by cellphones—could cause increased difficulties in concentration at school, as well as headaches and irritability.

If your kids must use a phone to contact you, texting is preferable over talking, since the phone can be kept further away from the body.

Of course, it’s not just children who are at risk of exposure to radiation from cellphones and other wireless technologies. Nearly everyone in our culture today has a cellphone on hand or spends their days surrounded by other people who do. But because children’s young bodies and minds are constantly developing at such a rapid rate, they stand at increased risk for permanent cellular damage that could have lasting effects on their ability to perform and thrive, at school and beyond.

Because cellphones are a relatively new phenomenon, there’s no way of telling what the long-term effects might be on a generation of children who have been exposed to such chronic radiation emissions for their entire lives. Indeed, exposure often begins before birth. In a longitudinal study of prenatal women, published in 2008 in the journal Epidemiology, those who used cellphones more often during their pregnancies saw 25 percent more emotional problems, 35 percent more hyperactivity, 34 percent more peer issues, and 49 percent more conduct problems in their children than those who did not.

Many parents are beginning to understand that the convenience of cellphones is not worth the health risks for their children. But what can you do to protect your kids from radiation exposure in today’s smartphone-driven society?

The best option is to abstain from cellphone use altogether. But if your kids must use a phone to contact you, texting is preferable over talking, since the phone can be kept further away from the body. Never keep a cellphone in your child’s bedroom at night, since the devices continue to emit radiation 24 hours a day, even while not in use. Furthermore, you can invest in specialized EMF blockers that offer cellphone radiation protection and help limit the rate of internal absorption.

Why take chances on your child’s development? Get smart about cellphone use and do what you can to limit the risks of radiation exposure. The future health of our children may depend on the steps we take today.

This post was contributed by Bioelectric Shield and originally published on NaturallySavvy.com