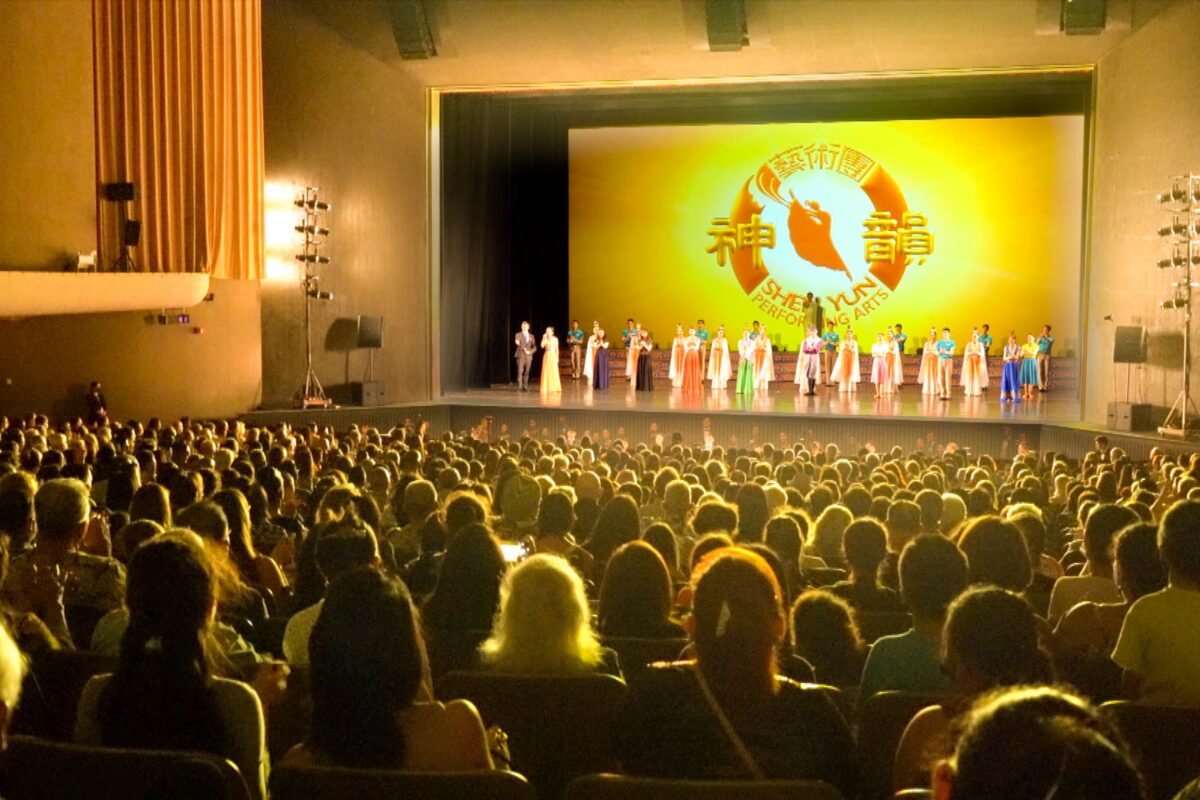 The Profound Healing Effects of Joy, Beauty, and Hope

Shen Yun Performing Arts is the world’s premier classical Chinese dance and music company. According to its website, it was established in New York by elite artists inspired by a shared mission—to bring back the lost world of traditional Chinese culture.

The performance is meant to entertain and uplift audiences, yet many have reported an unexpected reduction in pain or an increase in mobility. The effect has been so dramatic in some cases as to defy explanation, though researchers, doctors, and other experts point to several effects Shen Yun might be having on the mind and body.

I’m an expert in infectious disease and antiviral drug development and have been the chief scientific officer at a Swiss biotech company. More and more, scientists are starting to recognize the incredible interconnection between mind and body. Understanding this connection might help explain why so many Shen Yun audience members report improved physical and mental health after watching the performance.

Shen Yun pairs classical Chinese dance with an orchestra that combines authentic ancient Chinese instruments with orchestral instruments from the West. Shen Yun’s performance is filled with bright color, breathtaking music and dance, universal values, and a message of compassion. It’s the kind of performance that audience members often say leaves them in tears of joy and filled with hope.

Beauty, as well as the awe it stirs in the human spirit, has a profound impact on how we think and feel. Shen Yun’s beauty comes from many aspects of its performance, but it may offer an even deeper resonance for many because of the culture it comes from. Chinese civilization has persisted for 5,000 years, orders of magnitude longer than any other civilization, though it did suffer a catastrophic communist revolution in 1949. Despite that, the culture persists, and within it are profound insights into how to live a dignified and meaningful human life.

The dramatic decrease in pain and disease symptoms some audience members report after seeing the performance is worth looking into.

“You know, when we were coming to the show, I was sitting at the beginning [of the performance], and I was saying, ‘Oh, my back hurts,’” Antonio Divine, a nurse who works in a Baptist hospital, said. But after watching the Shen Yun performance at Fort Lauderdale’s Au-Rene Theater on Dec. 29, 2021, Divine realized that his back pain had disappeared.

Divine isn’t the only person who has experienced such pain-relieving effects after watching Shen Yun.

Queene Owl said she had pain in her legs as she was making her way to watch Shen Yun at the Belk Theater in Charlotte, North Carolina, on Jan. 8, 2022. But once she watched the performance, her pain disappeared.

“When I came, I was in pain. I had cramps in my feet, upper thighs, and calves. I had a hard time walking; it was painful to even try. I usually do, and I’m used to it. I need a wheelchair in case I need support. But now I feel better,” she said.

“I can’t explain the feeling, it’s just this ‘ooh wow’ feeling, and I think the energy had a lot to do with it. … I looked at that amazing art and beauty, and I forgot about [the pain].”

Diane Richter, a retired caregiver who still works at St. Paul’s School in Cudahy, Wisconsin, suffered a lot of pain and stiffness in her body and neck due to an accident when she was a teenager. On Jan. 2, she watched Shen Yun at the Marcus Performing Arts Center in Milwaukee, where she experienced the disappearance of pain and stiffness in her body for the first time in 49 years.

“I came in with stiffness in my body and my neck, and I don’t know how to explain this, but it’s gone,” she said. “It’s like through the time of watching [Shen Yun], it [was] actually released, and it’s not painful right now.”

On Feb. 12, 2022, Walter Dixon, a retired business owner who suffers from Parkinson’s disease, came with his cane to see Shen Yun perform at the Oncenter Crouse Hinds Theater in Syracuse, New York, and walked out after the performance without it. “I usually use walking sticks. I’m not using them right this minute. I’m standing without them. I have Parkinson’s disease. I had trouble getting in here, and after the show, I walked right out of there—I don’t know what happened.”

One thing we have learned in recent years, which was widely held in older forms of medicine, is that a poor mental and emotional state is a foundation for illness.

There have been numerous immunological studies showing that if a person is in a state of chronic stress and depression, the release of the stress hormone cortisol increases, which not only suppresses the function of immune cells (including phagocytes, natural killer cells, T cells), but also inhibits their ability to fight viruses.

Depression also increases the production of pro-inflammatory cytokines and chemokines, leading to a state of chronic inflammation, which in turn can easily trigger or aggravate chronic diseases (such as cardiovascular and neuromuscular disorders) and lead to further deterioration of chronic symptoms, including pain.

These reported cases of pain completely disappearing—even long-term severe pain—may be related to the decrease of stress hormones and increased levels of endorphins and oxytocin while watching Shen Yun.

In August 2021, professor George Slavich from the Center for Psychoneuroimmunology at the University of California–Los Angeles and psychology professor Jamil Zaki from Stanford University published an article in the journal Anxiety, Stress and Coping, proposing three evidence-based strategies that could help foster individual and collective recovery, growth, and resilience. Those strategies are cultivating social belonging, practicing compassion, and engaging in kindness.

For many people, a sense of social belonging all but disappeared during the pandemic.

Berlin was glad to see people come together for Shen Yun performances in part because of the shared social experience.

“When you come to something like this, you see people coming together and the beauty of community,” he said.

Many experiences can provide this sense of community, but not all of them generate compassion and kindness. For many people, these virtues, which are woven throughout Shen Yun’s story-based dances, stand out as a powerful medicine.

“Being a physician, I use my hands to get things done and take care of my patients, while these performers use their bodies, their gestures, their fingers—they use every part of their body to heal—as what they did tonight was a form of medicine. It was a perfect prescription for joy and pageantry and beauty and honor, and everything. It is just good and magical,” Miller said.

“And we need it. It’s the perfect prescription for happiness.”

More Than Just Art and Beauty

In the 1970s, Dr. Norman Cousins, a UCLA professor of psychiatric and biobehavioral sciences, tailored for himself a holistic approach that included spirituality and laughing, prescribing himself comedy movies. He eventually recovered from a life-threatening autoimmune disease.

Joy is medicine, but Shen Yun’s healing power isn’t just based on joy—it also delivers a potent dosage of awe. Shen Yun aims to bring back universal values and deliver a message of compassion.

One Harvard study quantified the power of compassion with biomedical methods. Students were shown a 50-minute film of Mother Teresa performing acts of kindness, helping the sick and dying poor of Calcutta.

The audience’s immune function was enhanced and remained high for an hour afterward. This effect happened even to those who didn’t like Mother Teresa; their brains subconsciously resonated with her good deeds and the power of compassion.

This is far from the only study demonstrating a link between kindness and health benefits.

Studies have shown that when people do good deeds, their levels of oxytocin increase. Oxytocin has been shown to promote immunity and help people fight viruses and bacteria. Science has shown that kindness has a biochemical effect; accordingly, kindness can be used as a treatment for pain, depression, and infectious disease.

More interestingly, the oxytocin in the body of those who witness the good deeds will also increase. If a performance includes a story of acts of kindness toward others, it has the potential to help increase the audience’s oxytocin levels, which in turn can boost immunity and reduce chronic inflammation.

All this is to say we can’t discount the importance of the role our thoughts and behaviors play in our health. Any spiritual phenomenon has a material implication, and we can’t neglect this.

A study published in the Proceedings of the National Academy of Sciences found that people with different perspectives on well-being (hedonistic versus eudaimonic/altruistic) had two different types of gene-expression profiles for peripheral immune cells. People who had a noble purpose in life had a clear pattern of a much stronger potential for antiviral immunity than those who were more focused on self-gratification. The effect of our thoughts could be as far-reaching and deep as the genetic layer of the human body.

Dr. Yang Jingduan, an expert in neurology and psychiatry who did a research fellowship in clinical psychopharmacology at Oxford University, is also an expert in integrative Chinese and Western medicine. Yang has found that one’s behavior has the most direct impact on one’s physical health. “And the most powerful influence on our behavior is our emotions. The strongest effect on our emotions are our thoughts. And what determines our thoughts is our belief system,” he said.

“Ancient Chinese medicine holds that in each internal organ system exists a soul or spirit, and they are the immortal part of our life, called our ‘true self.’ What nurtures our spiritual part are the five virtues: compassion, respect, justice, wisdom, and faith.

“The morals of Shen Yun’s performances present the best practice of these values. In summary, Shen Yun nourishes our body, mind, and soul.”

“Anyone who practices these values will find themselves much more positive, happier, and relaxed. These minimize their reactions to daily stressors, consequently eliminating one of the most fundamental causes of illness—stress,” Yang said.

Audience members who experience unexpected relief from symptoms that are normally difficult to treat have been sharing these stories with friends and family, generating more interest in Shen Yun. Parkinson’s disease is not curable, yet Dixon experienced such a miraculous improvement after watching the performance. This kind of result is particularly interesting for medical professionals.

Yuhong Dong is the chief scientific officer for a Swiss biotech company and was previously a senior medical scientific expert for antiviral drug development with Novartis Switzerland and held similar roles at Novartis China. She is a postdoctoral fellow in the Chinese Academy of Medical Sciences and a doctor of infectious diseases.