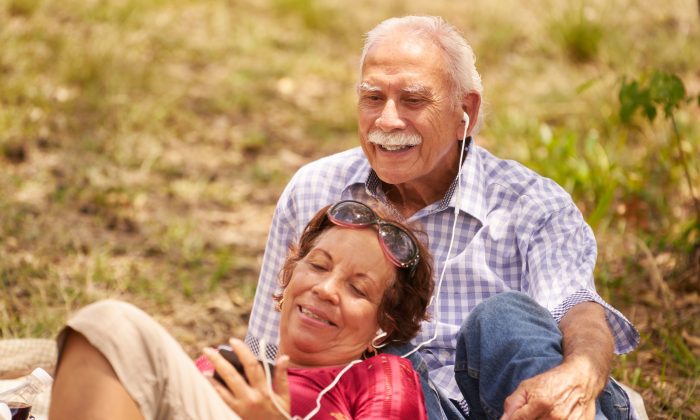 The Power of ‘Our Song,’ the Musical Glue That Binds Friends and Lovers Across the Ages

Many couples have a special song – “our song” – that reminds them of a significant event or time in their relationship, like when they first met, their wedding or when they were separated by war.

These songs are a powerful way of reconnecting with their shared personal memories and the emotions that go with them. They are a type of shared or autobiographical memory triggered by music; they work as a “mental glue” for a couple’s shared identity.

Despite how common these songs are, there is surprisingly limited research on music-evoked autobiographical memories. There are, however, numerous anecdotal and film references to the power of “our songs” to bring people back to themselves and to reconnect with others, particularly in dementia.

The types of memories music most commonly evokes tend to build and maintain social relationships.

While we often think of couples having a special song, close friends and family members can also have a shared song.

The film Moonlight provides a dramatic representation of this. In this winner of Best Picture at the 2017 Academy Awards, high school friends Chiron and Kevin enjoy listening together to the song Hello Stranger by Barbara Lewis.

They have an intense friendship during a challenging time for Chiron. He was bullied at school, and received little support from his drug-addicted mother. Many years go by, and they drift apart. But when Kevin hears the song again it brings back powerful memories of their friendship. He phones Chiron in the middle of the night, and Chiron decides to drive all the way to the town where Kevin is, showing up at the restaurant where he works. And in a memorable scene of their reunion, Kevin puts on their song.

Through the Ages and Despite Dementia

For people who share a significant song with someone, the effects can be powerful and persistent, retaining meaning well into older age, even in the face of cognitive decline that occurs in dementia.

In people with dementia associated with Alzheimer’s disease, a neurodegenerative condition causing impaired memory, we have described how musical abilities and memory for music can remain “an island of preservation” in an otherwise cognitively impaired person.

There are striking cases of people in the severe stage of Alzheimer’s dementia who can continue not only to remember “our song”, but also play their musical instrument, even land a recording deal, and learn and recall new music, despite no formal music training.

How is this possible? Neuroimaging research shows music provides a “super stimulus” for the brain. It activates widespread brain regions, including parts controlling movement, emotion and memory. Familiar and favourite songs can also powerfully engage the frontal regions of the brain, which are typically spared from damage in people with Alzheimer’s disease.

This means music can trigger memories in a way no other catalyst can. Music can provide a crucially important link to an individual’s past, and provide a means of reconnecting to a shared past.

In our research on people with Alzheimer’s dementia, we found music is more effective at triggering personal memories than other cues, like photographs.

Songs from the “reminiscence bump“, an age that extends from adolescence to early adulthood, are most likely to trigger music evoked autobiographical memories. Timing is crucial. This is a time when many people are establishing their self-identity, and often find their first partner or spouse.

This means if couples met early in life, they may be more likely to have laid down a special song during their “reminiscence bump”. This was the case for high school sweethearts Barbara and David, who took part in our yet-to-be published research (names changed).

Barbara was diagnosed with Alzheimer’s dementia five years ago and often became confused and agitated. Sometimes, she wouldn’t even recognise her husband David. When she accused him of being an intruder and chased him out of their family home, David had no idea how he could make her understand he was her partner of nearly 60 years.

He now says it was the power of song that brought Barbara back to him. On the night they first met, they danced to the last song of the evening, Unchained Melody, by the Righteous Brothers. He began singing this to her every day, and eventually “she came back”, and the episodes of her failing to recognise him have stopped. Barbara and David had heeded the lyrics: “I’ll be coming home, wait for me”.

Music exists in all known cultures. Some researchers say it has persisted throughout evolution as a crucial ingredient for social cohesion. As with this bonding function, the types of memories music most commonly evokes tend to build and maintain social relationships.

Regardless of whether people have dementia, music-evoked autobiographical memories are typically reminiscent of a special other, often a current or ex-partner, or of a time of socialising during a period of life, such as high school dances or wartime romances.

In this way, all songs have the potential to be “our songs”, and given the importance of social bonds for people of all ages and throughout human history, we may even owe our survival to them.

Amee Baird, Clinical Neuropsychologist and NHMRC-ARC Dementia Research Development Fellow at Macquarie University in Sydney. Bill Thompson is Chief Investigator in the ARC Centre of Excellence in Cognition and its Disorders at Macquarie University. This article was originally published on The Conversation. Read the original article.