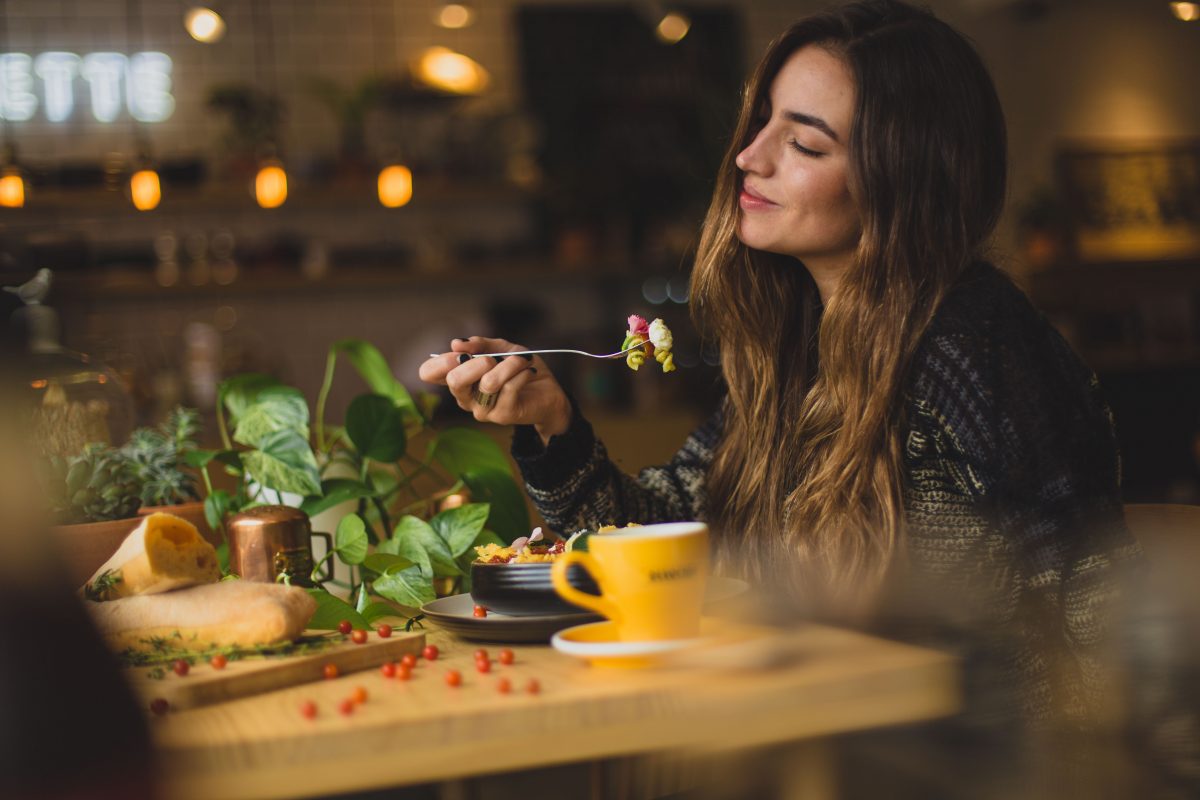 Focusing on your food, and what your body is telling you, are components of both mindful eating, and Fletcherism. (Pablo Merchán Montes/Unsplash)
Health

The Popular Reincarnation of a Victorian Food Trend

This approach to un-dieting can help you lose weight and improve your health
BY Lauren Alex O' Hagan TIMEFebruary 25, 2019 PRINT

In recent years, mindfulness—defined as “a mental state or attitude in which one focuses one’s awareness on the present moment”—has become embedded into our everyday language. Mindfulness has helped many people develop the skills necessary to manage chronic pain, depression, anxiety, stress, and sleeping disorders. It has also become a popular way to change eating behaviors under the term “mindful eating”.

Mindful eating encourages people to pay attention to food with all of their senses, noticing the physical and emotional responses that take place before, during, and after an eating experience. Mindful eating teaches people to use wisdom to guide eating decisions, acknowledge food preferences non-judgementally, and recognize physical hunger cues.

Although its purpose is not to lose weight, mindful eating can help those struggling to follow long-term diets by correcting their attitudes toward “good” and “bad” foods. Eating mindfully is also said to help reduce emotional eating and promote eating smaller portions and fewer calories.

Despite its current popularity among psychologists, nutritionists, and dietitians, mindful eating is nothing new. In fact, it can be traced back to the late Victorian era and the work of American health food enthusiast Horace Fletcher.

Dubbed the “great masticator,” Fletcher argued that “head digestion” (a person’s emotional state when eating) played a significant role in their food choices. Consequently, it was advisable to chew each mouthful of food 32 times (one for each tooth) in order to improve one’s physical and mental well-being.

In 1913, Fletcher published his first book on the topic: Fletcherism: What It Is or How I Became Young at Sixty. His advice bears a striking similarity to mindful eating guidelines today:

Second: select from the food available that appeals most to appetite, and in the order called for by appetite.

Third: get all the good taste there is in food out of it in the mouth, and swallow only when it practically “swallows itself”.

Fourth: enjoy the good taste for all it is worth, and do not allow any depressing or diverting thought to intrude upon the ceremony.

Fifth: wait; take and enjoy as much as possible what appetite approves; nature will do the rest.

Fletcher claimed that comfort eating caused indigestion. As such, he advised readers to stop and take a moment to notice their feelings before reaching for food automatically. Likewise, Fletcher maintained that an awareness of the food in the mouth led to “wonders of new and pleasant sensations, new delights of taste, and new leanings of appetite.” These recommendations to eat intentionally and savor every bite still form central components of contemporary mindful eating.

The Art of Eating

In line with some of the current claims of mindful eating, Fletcher stated that regular practice of what became known as “fletcherising” would result in head clarity, increased body strength and stamina, and would fend off illness and tiredness. To demonstrate these assertions, he personally challenged Yale’s top athletes to a competition of strength and endurance, which, at 60 years of age, he is reputed to have won.

Fletcher’s book quickly became a bestseller and his methods were taken up by such eminent figures as Arthur Conan Doyle, Franz Kafka, Theodore Roosevelt, and Mark Twain. The cereal producer John Harvey Kellogg also implemented Fletcherism in his Battle Creek Sanitarium in Michigan and even hired a quartet to write “The Chewing Song”—as featured in The Road to Wellville—a film about Kellogg to promote its benefits.

Soon, Fletcherism was being advocated for children as a way to teach them to be aware of their bodies and minds. Thanks to avid campaigning from the health reformer, Bernard MacFaddan, it was added to school hygiene textbooks by 1914. Fletcherism was also considered beneficial to prisoners and soldiers, with one criminal claiming that it had enabled him to break the bad habits of a lifetime, as he learned that “dietary righteousness went hand-in-hand with spiritual well-being.”

Throughout the first half of the 20th century, “munching clubs” emerged across the United States and Britain, with “Fletcherites” getting together to eat mindfully in what can be considered an early form of group mindfulness. However, after Fletcher’s death in 1919, the practice slowly lost momentum, and mindful eating was instead replaced with a more unhealthy approach to food—and so was born the calorie-counting diet. This was based largely on the consumption of diet pills, chewing gum, laxatives, and Lucky Strike cigarettes.

The recent trend of mindful eating has once again thrust Fletcherism into the spotlight. And the similarities between mindful eating and Fletcherism have led researchers to test the effectiveness of 35 versus 10 chews per mouthful of food.

They discovered that higher chewing counts reduce food intake, as they result in lower levels of the hormone ghrelin which stimulates appetite. This can make a person more wakeful to their food choices and feel more in control of their eating.

And yet, nutrition today still remains too concerned with which foods to eat and which foods to limit. Whether you call it Fletcherism or mindful eating, this practice demonstrates that learning how to eat is just as important as learning what to eat.

Lauren Alex O’ Hagan is a doctoral student in the school of English communication and philosophy at Cardiff University in the UK. This article was first published on The Conversation.