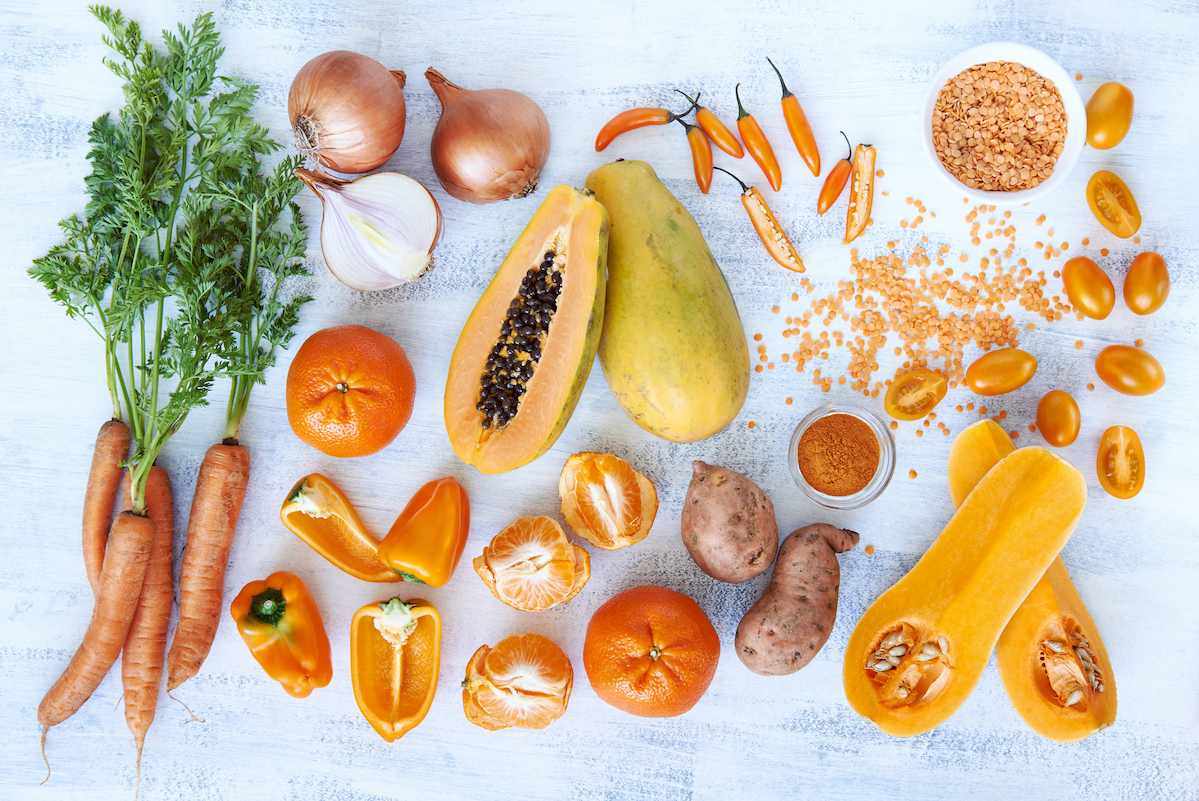 Go ahead and forage for orange foods. They're typically tasty and deliver unique phytonutrients.(Daxiao Productions/Shutterstock)
Food as Medicine

The Nutritional Magic in Orange Foods

Eating this shade of the rainbow is easy, fun, and offers unique health benefits
BY Jennifer Margulis TIMEFebruary 20, 2022 PRINT

“What should I eat?” is a question every parent hears, often several times per day. My teen stood by the open refrigerator, hanging on the door, sighing loudly.

A car needs the right kind of gas to run smoothly. Humans need the right kind of food to optimize their health and well-being. The best foods for our bodies and our brains are the freshest, made in our own kitchens instead of in industrial plants.

But eating should also be delicious and bring us joy. It’s no good to shovel “healthy” food into our mouths, standing by the sink, stressing about work, school, or the latest deadly infection.

It’s also a mistake to stress about food. If we prepare a beautiful meal, but we do it resentfully, worried about the mess we’re making in the kitchen and feeling insecure about whether our effort will be appreciated, we also miss the opportunity to nourish our minds and bodies.

This brings me to why I love to eat orange foods. Colorful fruits and vegetables are full of vitamins, minerals, and phytonutrients (phytonutrients are chemicals that help protect plants from invaders and are also beneficial to humans). They’re also easy to prepare and oh-so-tasty.

So grab an orange pepper out of the fridge and squeeze yourself a glass of fresh orange juice, and I’ll tell you more about these foods and why you should eat them.

All of these vegetables and fruits are high in carotene, which is the yellow-orange pigment that gives them their bright orange coloring. Carotene is one of a group of orange, red, and yellow pigments known as carotenoids that are made by plants, animals, and even fungi. For the most part, the deeper the orange color of the food, the higher the carotene content it has.

So why do we want to eat foods high in carotene? Our bodies convert this plant-made hydrocarbon into vitamin A in the liver.

In grade school, a teacher likely told you that if you eat carrots, you’ll see better at night. Not only is it true that vitamin A helps maintain good eyesight, but it’s also responsible for keeping us healthy in a variety of other ways.

To wit, carotenoids promote the growth and repair of epithelial tissue (the tissue lining your mouth and intestines), bones, and teeth. They help prevent acne and maintain healthy skin, which is why so many people report seeing their acne improve when they start eating a more whole-food, plant-based diet. Furthermore, carotenoids in general and vitamin A, in particular, support a healthy natural immune response by aiding mucous membranes in secreting mucus to keep them moist and healthy.

Carotenoids are crucial in helping protect against colds, flus, and infections of the kidneys, lungs, bladder, and mucous membranes.

But that’s not all. They also aid in digestion and help prevent gastrointestinal ulcers.

Your body’s natural vitamin A also functions as an antioxidant, which means that it helps the body get rid of harmful agents (called free radicals) that are generated during the metabolism of fatty foods.

But we should eat a lot of orange foods for more than just their carotenoids. Many orange foods are also high in vitamin C, antioxidants, and micronutrients. There’s no question that eating these fresh, healthy foods—in the form of whole foods—helps our bodies function better and avoid illness.

That’s why I pulled three colorful bell peppers out of the fridge for my son. And, like a typical 18-year-old young man who’s always ravenous, he enthusiastically ate them all.

According to a 1998 study published in the British Journal of Ophthalmology, some orange vegetables can help older adults avoid macular degeneration, an eye disease that can eventually lead to partial or total blindness.

Indeed, scientists at the University of Heidelberg Medical School in Germany found that vegetables such as orange peppers and corn contain high quantities of two nutrients—lutein and zeaxanthin—that are antioxidants and help the body fight against the disintegration of the macula (part of the retina at the back of the eye).

Orange peppers are especially high in zeaxanthin, and orange citrus fruits and squashes also contain high levels of both lutein and zeaxanthin, according to this research.

Lowering Your Risk of Cancer

Consuming a variety of orange vegetables and fruits may also protect you against cancer.

According to a 1986 study in the American Journal of Epidemiology, men in New Jersey who reported eating the highest portions of dark yellow and orange fruits and vegetables had the lowest incidents of lung cancer.

“Consumption of dark yellow-orange vegetables was consistently more predictive of reduced risk than consumption of any other food group or the total carotenoid index, possibly because of the high content of beta-carotene relative to other carotenoids in this particular food group,” the scientists wrote.

A much larger study, of 472,081 participants aged 50 to 71, also found that increased consumption of fruits and vegetables may protect against lung cancer, but only for men, leading the researchers to caution that the data was “inconclusive.”

At the same time, however, a 2013 meta-analysis by medical researchers at Zhejiang University in China found that higher intake of beta-carotene, alpha-carotene, lycopene, beta-cryptoxanthin, lutein, and zeaxanthin all reduced risk of esophageal cancer.

And in a 2015 review published Cancer Epidemiology, Biomarkers & Prevention, a team of researchers in Rome similarly found that intake of carotenoids “act protectively” to reduce the risk of head and neck cancers.

Other research has also linked higher citrus consumption with a lowered risk of breast cancer.

Getting Your Daily Dose of Orange

Eating raw fruits and vegetables, preferably ones that are local, freshly picked, and organically grown, is often the best way to maximize their nutrient and fiber content, but cooking these foods can increase bioavailability, according to a summary of research prepared by Oregon State University.

You can also add to your daily dose of orange vegetables by using puréed canned pumpkin to make pumpkin bread or pumpkin cookies or adding turmeric to your favorite smoothie recipe.

Slice some peppers: Make yourself a veggie plate with orange, yellow, red, green, and purple peppers. Serve with a bowl of artichoke bean dip or some spinach hummus to make it an extra healthy and delicious snack.

Host a citrus taste test: This is one of my kids’ favorite activities. Cut up five or six different kinds of citrus fruits, including regular and Meyer lemons, and do a taste test. Give each participant a score sheet so that they can rate their favorites. Or have them see if they can tell each fruit apart in a blind taste test. They’ll have so much fun figuring out which is which that they won’t realize that they’re eating such healthy food.

Roast a sweet potato: Cut a sweet potato in half lengthwise and put it face down on a baking tray. You don’t need to oil the tray first. Roast it at 425 degrees F for about 20 to 25 minutes or until soft and fragrant. You can eat it with your hands, as the skin makes a perfect “wrapping.” Or you could drizzle it with olive oil and enjoy it with a knife and fork. The skin is edible too, as long as the potatoes were organically grown. They’re also delicious with almond butter.

Whip up some butternut squash soup: Roasted butternut squash, sweet potato, and carrot soup are delicious and nutritious. It also freezes well, so you can make a double recipe and reheat it at your convenience.

Make orange rice: I love sautéing a lot of chopped vegetables, adding broth, and cooking them in rice to make what I call “busy rice.” To make orange-colored busy rice, sauté 1/2 cup to 1 cup of minced carrots and orange peppers with half a chopped onion and two cloves of chopped garlic until all the vegetables soften (about 5 minutes). Season with salt and pepper, along with a teaspoon or more of paprika and turmeric and a pinch of saffron if you’ve got it. Then add 2 cups of broth or water and 1 cup of white rice, simmer for 15 minutes (depending on the rice variety), let stand for 1 minute, taste to adjust seasonings, and serve piping hot with a vegetarian stir fry or meat entrée.