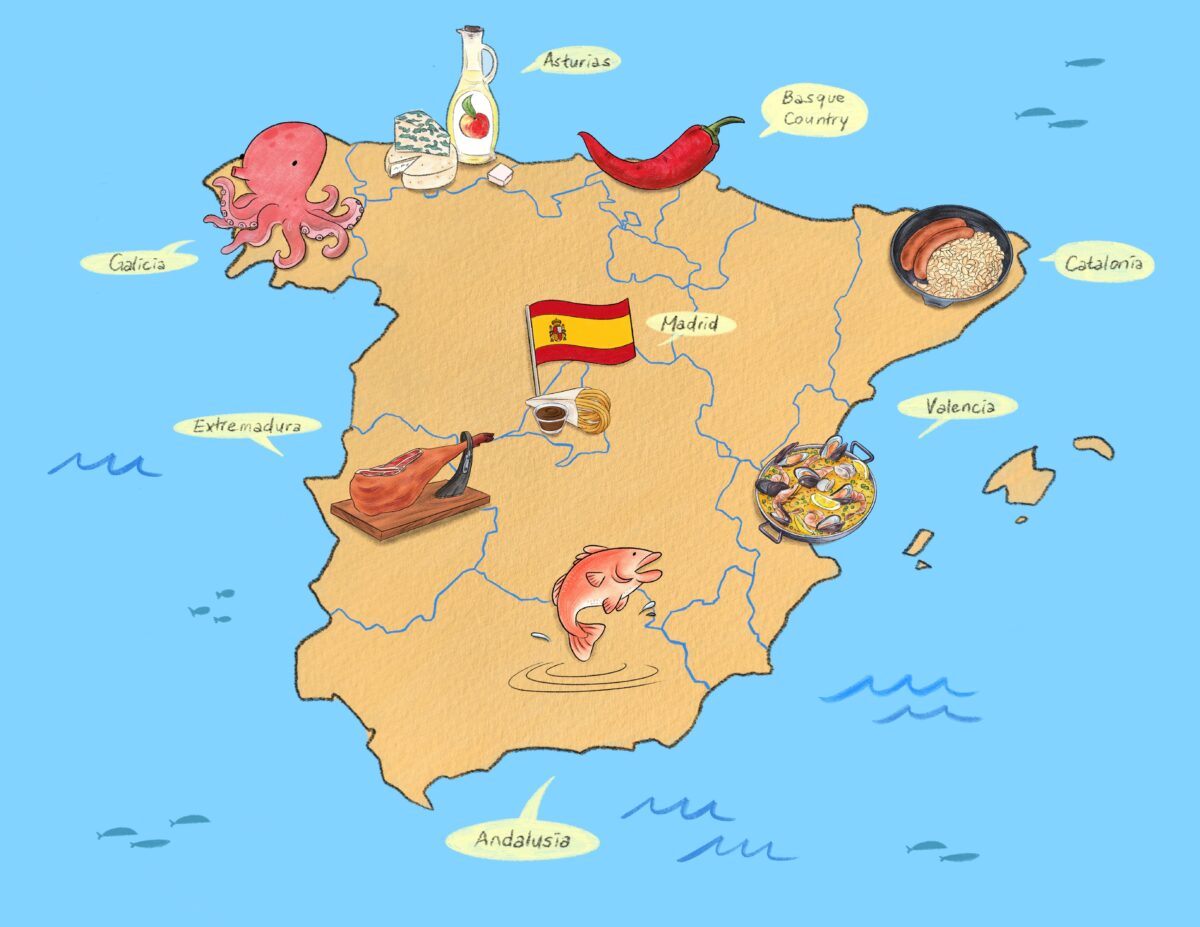 The Many Flavors of Spain

Spain manages to pack a lot of great food traditions inside its borders, and while some dishes are ubiquitous, many have specific regions of origin. Circling Spain’s regional map is a bit like flipping through a Spanish cookbook.

Situated along Spain’s southern coast, the menu is seafood-heavy. Various types of fried fish are common. Tapas, those little plates paired with drinks, originated here. Chilled and fresh, the tomato-based gazpacho is not to be missed, along with its slightly thicker Cordoban cousin, salmorejo, garnished with Serrano ham and hardboiled egg. And speaking of ham, in the mountains of Huelva and Cordoba, a special breed of pig raised on a diet of acorns is used to produce the dry-cured jamón Ibérico, the finest of the hams. For a fresh cut, seek out the Secreto Ibérico, a thin, marbled, remarkably tender cut taken from between the shoulder blade and loin of these famous pigs.

Landlocked to the north of Andalusia, Extremadura, an area also famous for its ham, is also known for its paprika. A smoked variety brings a flavor bomb to meat dishes, and with an abundance of game and those Iberian pigs, meat dishes and stews including oven-roasted lamb are common here. In addition to an assortment of baked desserts, the region produces some very fine cheeses, including one of the country’s best, Torta del Casar, made with raw sheep’s milk and wild thistle.

North of Portugal along the Atlantic coast, Galicia is perhaps best known for its octopus: Pulpo Gallego is cut in bite-size pieces, boiled with bit of potato, and served with olive oil and a dusting of sweet paprika. For something rare and delicious, look for gooseneck barnacles. Other shellfish—mussels, oysters, scallops—are in abundance as are deep-sea fish such as hake, cod, and tuna. But Galicia’s 300-plus annual food festivals speak to a much wider variety of dishes. Mild Padrón peppers, blistered and salted in the pan, are common, as are local nuts and wild berries. For a quick bite, find some empañadas—pastries filled with meat or seafood—at a local bakery.

Local apple cider is poured from a bottle held high above the glass, turning cider drinking into a ritual and spectacle. Pair a bottle with one of the region’s many cheeses. In the green mountains and valleys of Asturias and along the northern coast lies an abundance of cheese makers, offering varieties made with milk from cows, goats, and sheep—or a blend of all three as in the case of Cabrales, a limited-production blue cheese. Many cheeses are cave-aged or smoked, and range from creamy, mild varieties to sharp, complex rind cheeses.

The Basque like to do their own thing, and their substitute for tapas is pintxos (pinchos), which tend to be larger and are served on a slice of bread with a toothpick. Seafood is abundant and the Basque people have a long history with cod. Try bacalao al pil pil—salt cod with olive oil, garlic, and guajilla chilies in an earthenware dish. Marmitako is a fish stew made with tuna, potatoes, red peppers, onions, and garlic. An increasingly rare delicacy among locals, angulas are baby eels that almost look like two-inch noodles. The region also produces its own variety of lightly carbonated wine, txakoli, which pairs very nicely with fresh seafood.

Many Spaniards from all regions have long flocked to the capital for work or university and, consequently, influences come from all directions. Despite being landlocked (or perhaps because of it), the Madrileños love seafood, and you will see that in their tapas. If there is a place to eat churros, this is it: The golden fried dough is served with thick, sweet hot chocolate.

With Barcelona at its heart, Catalonia offers the bounties of both the Mediterranean and the mountains. Esqueixada is a popular warm-weather salad made with shredded salt cod, chopped tomatoes, onions, red peppers, black olives, and olive oil. Escalivada is a side dish made of tomato, eggplant, and peppers roasted over an open flame. Calçots are green onions grilled over a flame—a popular snack in Girona between January and March when they are in season. Check out botifarra, a lean pork sausage served with white beans. Aioli, garlic pounded in olive oil until creamlike, is a popular condiment and adds pizzazz to a seafood paella.

Paella, considered by many outsiders to be Spain’s national dish, hails from Valencia, a region rich with rice. Much more than just a recipe, it is central to Valencian culture. Cooked in a large pan, the Valencian recipe includes chicken, rabbit, and snails plus a blend of vegetables. Traditionalists, such as chef Toni Montoliu at Barraca, cook the dish over an orange-tree wood fire at his country restaurant. Other rice dishes include a paella of mixed seafood, and stews and suquets are also popular. Chufa, or tiger nuts, are farmed here and made into a nut milk called orxata (horchata) that is believed to offer many health benefits; the best must be procured fresh, a few miles from its source. Drink it with fartons—spongy, sweet bread rolls.