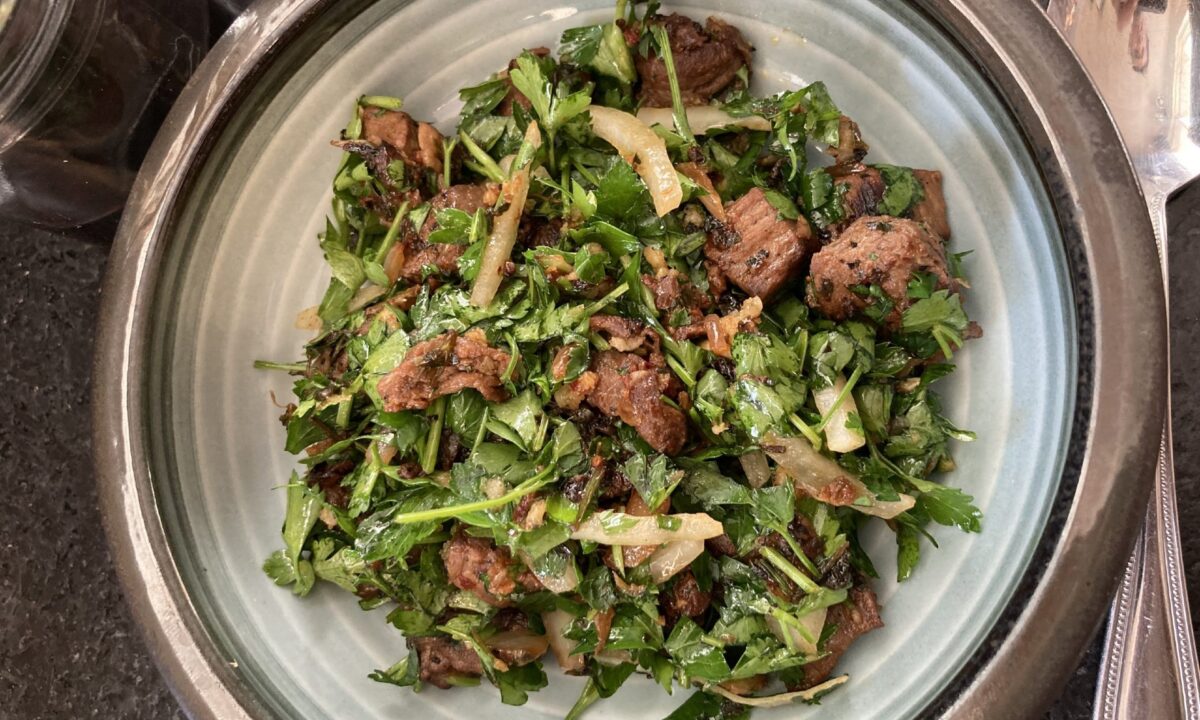 Garlic-fried wild game—or the closest to it you can find—completes this zingy herb salad. (Ari LeVaux)
Food

Wild game is the tastiest, cleanest, and most ecologically justifiable meat on the planet. But the ultimate reward of hunting is neither the kill nor the thrill of the chase, but how you come out the other side—regardless of whether or not you bring meat. It requires competency on many levels, including navigation, shooting, wildlife biology, your own physical limits, and reading a landscape. I look at mountains differently now, palpating each valley and fold with my eyes hungrily.

My wintertime elk hunting trips in middle Montana are cathartic journeys. The bitter cold is invigorating and demanding. The relentless wind is cleansing and therapeutic; when it shoves you around and screams in your ear, it’s hard to not take it personally. After a hunt, I feel like I can do anything, and everything else feels easy by comparison.

This year, getting to where I wanted to hunt took three attempts. On my first try, I hit a chunk of private property that I stupidly hadn’t noticed on the map. The next time, I almost got stuck in the snowdrifts crossing the road. I came back a few days later with a new set of tire chains and made it a few miles further up the road, then clicked into my backcountry skis. After a steep climb, I finally got to the edge of the area where I was permitted to hunt.

In the magical light of the setting sun, I spotted a massive elk herd in a large field about two miles away, but had no time left on the clock to pursue. I was elated, knowing they would likely be here when I made it back. On the way down, I stopped to watch a lynx lick its paws.

On the fourth day, I started before dawn and got even further up the road. I skied up the ridge, climbing 1,000 feet out of the canyon and into the blasting wind.

When I got to the spot, I couldn’t see the herd in the field where they had been, but I headed that way anyway. I had my eye on a forested ridge about halfway there, perpendicular to my line of travel. When I got close to the ridge, I veered off course, toward an open saddle, because cresting the ridge with the wind at my back might bring the scent straight over. I crossed the saddle and slipped into the forest on the other side, my skis silent in the powder snow. The wind was noticeably less oppressive. Instead of screaming in my ear, it was screaming a hundred feet away, giving a sense of peace and shelter like the sound of rain on a roof. Trees were creaking in the wind, which sounds a lot like the sound of elk talking.

I slunk along until I saw a large cow, bedded down, facing the ridge with her nose into the wind, barely a hundred yards away. It was a layup of a shot. I backed up until it was out of sight, which meant I was out of sight, and then took off my skis.

I snuck around the forest in the deep powder snow, missing my skis but ready to lie down and shoot. My noise was completely muffled by the wind, which also carried away my scent. I saw more cows, and a massive body next to a tree, with billowing waves of bulging flesh all over the place. Its head was behind the tree, but its fur had a golden hue, which means he was a bull. In that area, at that time, I was only allowed to shoot antler-less elk, a category that includes juveniles—calves—and females of any age.

I was three miles from the truck, the wind was picking up, and it was starting to snow. I knew I might get snowed in, or not be able to come back the next day, so I wanted an elk that was small enough to haul out that evening. The full-grown cows, in addition to being huge, were likely pregnant.

Finally, I spotted a small head atop a dark, skinny neck, 80 yards away. I lay on my belly and made a gun rest out of snow, and found its head in my scope. I took a breath, and shot. The rest of the herd stood up around me and silently vanished.

Then the work began. I cut a piece of skin from its rib cage and knelt on the warm fur to keep my knees dry. An hour later I had removed the shoulders, the hindquarters, the long rib eyes (aka “backstraps”), two tenderloins, and as much neck meat as I could carve off. I divided the load in half, clicked back into my skis, and shouldered the heavier half, along with my .270. I could only make it about 200 yards.

I put down my load and rested my shoulders while I went back for the other half, which I carried further, grabbing my rifle as I passed the first load. I continued leapfrogging my loads until I got to the road. Then I went down for the sled and slid everything down to the truck, 10 hours since I shot the elk, 13 miles since leaving the truck.

After that kind of bloody struggle, I don’t want to eat meat right away. I want to wash off the smell of blood, change my clothes, and decompress. Back at the cabin, I made a salad of parsley, onion, and lemon juice, and a pack of chicken flavored ramen with an egg cracked into it, and fell asleep.

The next night, I sliced one of the tenderloins, fried it in garlic, and added it to the same salad. Each elk amino coursing through my veins was a trophy more delicious than any antler. But more than meat or bone, the best part of hunting is the participation award.

Move over side salad, and pass that fried salad. If you don’t have wild game for the pan, seek out the most ecologically sound, most humane, and yes, most expensive piece of red meat you can find. Beef is the closest, but not very close at all.

Put the meat in a bowl with 3 tablespoons of the lemon juice, the salt, and the pepper and stir together. Add 3 tablespoons of the olive oil, half the garlic, and half the onions. Cut the parsley in half so that one half is mostly leaves and the other half mostly stems with a few leaves. Mince the stem half and toss it in with the meat.

Marinate in the fridge for as long as you can. At serving time, fry on medium heat in a heavy pan until the meat is browned on all sides.

Transfer the contents of the pan to a bowl and add the remaining onions, garlic, parsley, lemon juice, and olive oil. Season to taste.