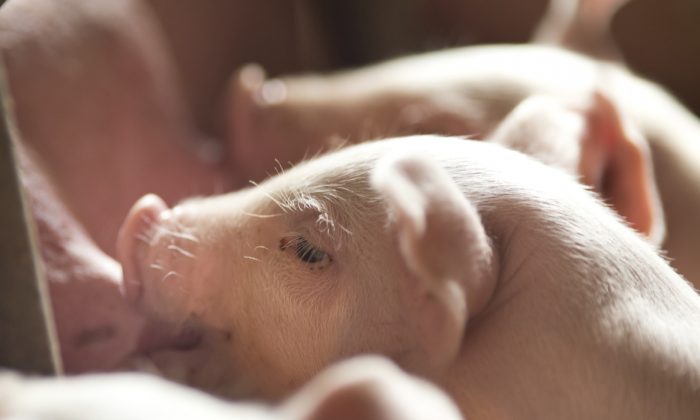 The Health of Our Food

An interview with Michael Greger, M.D.
By Shelley B. Blank

Michael Greger is the director of Public Health and Animal Agriculture for the Humane Society of the United States, as well as the author of several books on health, and the founder of NutritionFacts.org.

SBB: Dr. Greger, just in terms of numbers, how unhealthy is the food that is being offered us?

MG: Nearly 50 million Americans get food poisoning every year. In terms of healthy years of life lost, the top five most devastating pathogen-food combinations are Campylobacter and Salmonella bacteria in poultry, Toxoplasma parasites in pork, and Listeria bacteria in deli meats and dairy products.

Salmonella is the #1 cause of foodborne-illness-related hospitalization and death, and the FDA estimates Salmonella-tainted eggs alone sicken an 142,000 Americans a year.

One of the reasons U.S. animal products are so contaminated is the crowded unhygienic conditions inherent to industrial farm animal production. Egg operations that confine hens in cages so small they can’t even spread their wings, for example, consistently have higher rates of Salmonella compared to cage-free facilities.

Similarly, nearly 100,000 Americans are sickened every year by pork contaminated with Yersinia, another fecal pathogen that has been tied to industrial practices. Confining pregnant mother pigs in cages so narrow they can’t turn around causes immune system-suppressing stress that increases their risk of infections that can be passed along to consumers.

As the Pew Commission on Industrial Farm Animal Production concluded, “Practices that restrict natural motion, such as sow gestation crates, induce high levels of stress in the animals and threaten their health, which in turn may threaten human health.”

SBB: What would you say is our greatest threat?

MG: The greatest public health threat, though, may be that of a human influenza pandemic arising from bird flu. The last time a bird flu virus jumped species and spread easily human-to-human it triggered the deadliest plague in human history, the 1918 flu pandemic that killed 50 million people.

We don’t know what mutations may be necessary for the current virus jump from birds to humans, but the more birds that are infected, the more spins at genetic roulette the virus gets, the greater the likelihood that it could one day lock in the necessary mutations to trigger the next human pandemic. That’s why we have to change the way animals are raised for food.

SBB: Can you give us an example?

MG: When we overcrowd millions of birds in these cramped, filthy football-field sized sheds to lie beak to beak atop their own waste, it’s just a breeding ground for disease.

The sheer numbers of animals, the overcrowding, the stress crippling their immune systems, the ammonia from the decomposing waste burning their lungs, the lack of fresh air, and the lack of sunlight. Put all these factors together and what you have is really a Perfect Storm environment for the emergence and spread of new “superstrains” of influenza.

The industry needs to give these animals more breathing room.

SBB: What’s being done about it?

MG: In 2005 the United Nations said, “Governments, local authorities, and international agencies need to take a greatly increased role in combating the role of factory farming … which provide ideal conditions for the [influenza] virus to spread and mutate into a more dangerous form.”

These factory farms can be thought of as the original incubators of dangerous strains of the flu. The largest association of public health professionals in the world—the American Public Health Association—called for a moratorium on factory farms more than a decade ago. The public health community has been shouting from the rooftops, but unfortunately we don’t tend to shore up the levees until after disaster strikes.

MG: The industry has succeeded in hiding the realities of modern meat, dairy, and egg production. That’s why the industry is eager to pass these so-called “ag-gag” laws that often make it illegal to even take pictures in these operations, knowing that standard industry practices would not stand up to public scrutiny.

They run so counter to just mainstream American values of basic decency that the only way business can continue as usual is to keep the public in the dark as to how animals are actually being raised on today’s factory farms.

SBB: You have written books on these subjects—what does your latest book deal with?

MG: My last book, “Bird Flu: A Virus of Our Own Hatching” is now available free, full-text online at www.BirdFluBook.org It explores the human infectious disease implications of industrialized animal agriculture.

My new upcoming book “How Not to Die” will be released on Dec. 8, 2015, and is now available for pre-order at www.NutritionFacts.org/book. It delves into the chronic disease implications of our current food system, exploring the role a healthier diet could play in preventing, arresting, and even reversing many of our leading causes of death and disability such as heart disease and type 2 diabetes.

SBB: How did the public fall into this nutritional wasteland?

MG: Because of the industrialization of animal agriculture after World War II we’re now eating more meat dairy and eggs, and thanks to the trillion-dollar processed foods industry, we’re eating more added fat, sugar, and salt.

As you can see in the graph, the healthiest foods—those that maximize the nutrients that Americans aren’t getting enough of, and minimizing the food components Americans are getting too much of—are whole plant foods, vegetables, herbs and spices, fruit, mushrooms, legumes (beans, chickpeas, split peas, and lentils), whole grains, and nuts and seeds. The least healthy foods are those that the processed foods containing refined grains, oils, and added sugar as well as the animal-sourced foods.

The Society for the Prevention of Cruelty to Animals was founded in 1866. In 1877, delegates from 27 of these humane organizations across 10 states banded together to form the American Humane Association (AHA) to help farm animals and improve the conditions of their lives.

The Humane Society is not just about farm animals or pets. It’s about all life, about what it means to be alive, to be part of the society of being alive. It is up to us as individuals to find out the meaning of life; but certainly, collectively, we should honor it by sharing the responsibility.

For by enhancing the lives of all creatures, do we not enhance our own lives? Mercy for all is reasonable. Respect for that which makes us alive is logical. Can one calculate the relative importance of the words of William Shakespeare and the song of the whippoorwill?

Is not the question, instead, whether we can appreciate both for their independent and collective value and acknowledge the right of each to live life fully?