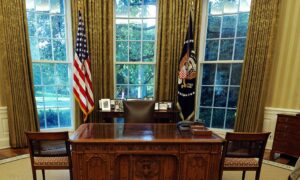 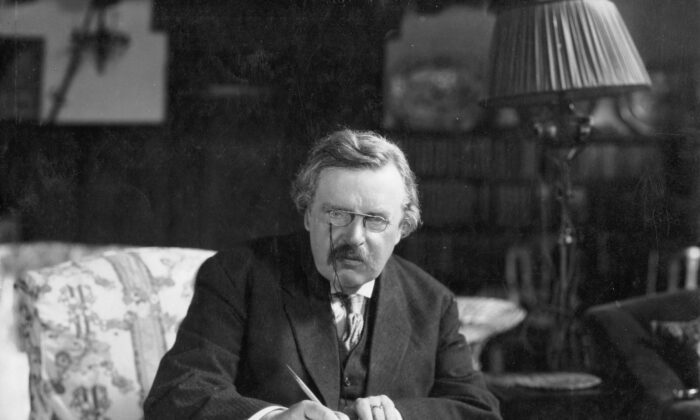 The Goodness and Greatness of G.K. Chesterton

Though the England of his time was famous for its eccentrics, one man in particular captured the attention of satirists and the hearts and smiles of the men and women of that island nation.

Writer G.K. Chesterton (1874–1936) was a giant of a man for his time, standing 6 feet 4 inches tall and weighing around 300 pounds. He was known for wearing a cloak and a broad-brimmed hat, giving him the appearance of a man casting about for adventures. He was disheveled, absent-minded, and frequently arrived late or not at all at his speaking engagements. Once when he forgot where he was supposed to deliver a lecture, he famously sent his wife, Frances, a telegram: “Am at Market Harborough. Where ought I to be?” Realizing he had already missed his lecture, his wife telegraphed back: “Home.”

In his “Autobiography,” Chesterton wrote of buying a glass of milk and a revolver on his wedding day: “Some have seen these as singular wedding presents for a bridegroom to give to himself, and if the bride had known less of him, I suppose she might have fancied that he was a suicide or a murderer, or worst of all, a teetotaller.” That last qualification made me burst out laughing when I first read it. He went on to say, tongue-in-cheek, that he purchased the revolver to protect his bride from “the pirates doubtless infesting the Norfolk Broads.”

This quirky romantic was also one of the most popular and most talented writers of his time.

Because of his ability to combine self-contradictory propositions that then seemed true, Chesterton as a writer is often dubbed “The Prince of Paradox.” The same might be said of the man himself. Fascinated with the occult as a boy, as an adult he became a devout Christian, entered the Roman Catholic Church, and wrote religious works like “Orthodoxy” and “The Everlasting Man,” which are considered classics today and taught in some of our universities and schools of theology.

At the same time, he loved his cigars and a pint of English beer, and throughout his work celebrated the beauties and attractions of the world. In his politics, he was also a practitioner of paradox as he pushed aside many of the positions held by both Progressives and Conservatives, writing: “The business of Progressives is to go on making mistakes. The business of the Conservatives is to prevent the mistakes from being corrected.”

In an April 2015 article in The Atlantic, “A Most Unlikely Saint,” James Parker offers this fine summation of Chesterton:

“Chesterton was a journalist; he was a metaphysician. He was a reactionary; he was a radical. He was a modernist, acutely alive to the rupture in consciousness that produced Eliot’s ‘The Hollow Men’; he was an anti-modernist (he hated Eliot’s ‘The Hollow Men’). He was a parochial Englishman and a post-Victorian gasbag; he was a mystic wedded to eternity. All of these cheerfully contradictory things are true, and none of them would matter in the slightest were it not for the final, resolving fact that he was a genius.”

Is there a genre of literature untouched by Chesterton?

In his career, he wrote over 80 books and thousands of essays. In addition to his theological works, he wrote mysteries, novels, short stories, poems, biographies, and articles on every topic imaginable. His Father Brown mysteries are still popular and have appeared on radio and television to great acclaim.

Novels like “The Man Who Was Thursday” and “The Napoleon of Notting Hill” continue to attract readers, his biographies of such luminaries as Charles Dickens and Saint Francis remain highly regarded by critics, and poems like “The Donkey” can still touch a reader’s heart.

What is remarkable about his essays in particular is that so many of them remain relevant to our time. A century after he wrote them, his observations on so many subjects—politics, religion, modernity, the sexes, education, and more—still speak to us.

Out of the Many, One

“In Defense of Sanity: The Best Essays of G.K. Chesterton” is the aptly named compilation put together by Chesterton experts and devotees Aidan McKay, Joseph Pearce, and Dale Ahlquist, who is also a co-founder and the president of the American Chesterton Society. From these 67 articles, I give you a look at just one here, his 1934 essay “On the New Prudery.” Rereading this piece last week, I found myself laughing aloud at some of GKC’s witty observations and marveling at both his style and the pertinence of his ideas as they apply to our present puritanical politicos. Here are a few selections:

“The New Prudery does not come out of stale sects or old shabby chapels: it comes out of all the new clubs, new leagues, new guilds of art and culture, new summer schools of science and philanthropy.”

“The new philosophies and new religions and new social systems cannot draw up their own plans for emancipating mankind without still further enslaving mankind.”

“All the nursery stories are to be subject to a Censor, who shall object if they are too pretty, as the very dullest sort of Victorian or philistine Censor would object if they were too ugly. … A new Paul Pry will be sent to sneak about our houses, or look through our keyholes, to find out whether (in some den of infamy) a child is being taught to admire courage.”

In addition to his title of Prince of Paradox, Chesterton might also be crowned one of the kings of the aphorism. We read his adages, the way they roll and twist and often stand matters on their head, and we sometimes feel as if we are watching performers made of syllables flipping or somersaulting from balance beams, tightropes, and springboards in a gymnasium or circus constructed from words.

Editor Dave Armstrong has collected hundreds of these maxims in his book “The Wisdom of Mr. Chesterton: The Very Best Quotes, Quips & Cracks From the Pen of G.K. Chesterton.” Some of these were already familiar to me, while those that were strangers made me smile:

“Angels can fly because they take themselves lightly.”

“An adventure is only an inconvenience rightly considered.”

“Chivalry is not the romantic, but the realistic, view of the sexes.”

“The madman is the man who has lost everything except his reason.”

“I have never understood what people mean by domesticity being tame; it seems to me on of the wildest of adventures.”

“Life in itself is not a ladder; it is a see-saw.”

No one writer is beloved by all readers. Some of us may affirm the greatness of William Shakespeare at a cocktail party, but we have yet to recover from the agony of reading “Julius Caesar” in high school.

The same holds true for G.K. Chesterton. Some might find a good deal to admire in his essays but not his novels, and vice versa. In my case, I prefer his Father Brown stories to his other fiction—I need to give his novels another shot—and find his essays a wellspring of inspiration in my own work.

But one reason we might all find reason to learn more about Chesterton is the man himself. Here was someone who loved living, whose rollicking exuberance over the simplest day-to-day occurrences—a sunset, what he found in his pockets (yes, he wrote an essay about those discoveries), even eating cheese, for heaven’s sake—was almost childlike in its innocence.

In his biography of Chesterton, “Knight of the Holy Ghost,” Dale Ahlquist writes of him:

“From beginning to end, Chesterton was characterized as a knight. In the farewell poem (Walter de la Mare’s tribute on the memorial card), he is portrayed as still at battle, still going his way, still paradoxical, for his fool’s attire is actually wisdom, his joke is actually the truth, and the fight is a delight. The devil doesn’t get the joke. The dragon can’t be taken seriously. The knight, ever of good humor, is at peace, his heart at rest because it is compassionate and pure. And, even today, he is still lovable, which is why people still love him. Still truthful, which is why he is still controversial.”

Chesterton plunged into life and made it an adventure.

Whether we read him or not, there’s a great deal of wisdom in that attitude alone.