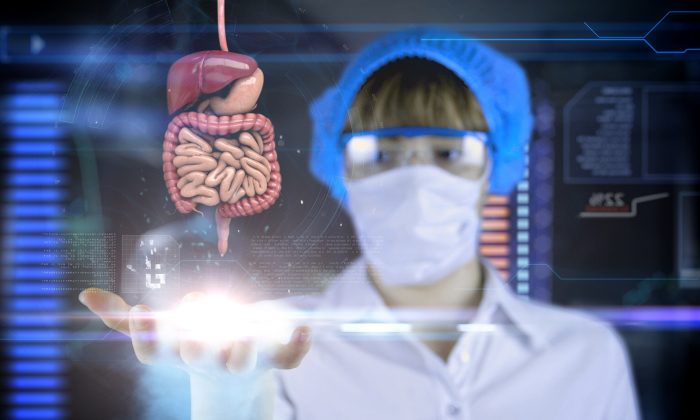 Crohn’s disease and ulcerative colitis, although distinguished by well-known characteristics, are collectively known as inflammatory bowel diseases (IBD). IBD is characterized by a host of symptoms such as diarrhea, abdominal cramps, rectal bleeding, weight loss, fever, and a host of extra-intestinal symptoms, including disorders of the eyes, liver, gallbladder, muscles and joints, kidneys, and skin. The treatments usually focus on relief of symptoms with anti-inflammatory drugs or surgery (i.e. removal of the affected part of the intestines).

Now, a new study has identified a specific fungus and two bacteria they think play a key role in what leads some people to develop the disease.

Research has previously identified that E. coli bacteria contribute to Crohn’s symptoms, but this is the first study to show the bacteria Serratia marcescens and the fungus Candida tropicalis are also involved.

Some have implicated a viral etiology to IBD. In the medical journal The Lancet, Dr. Wakefield and colleagues found that three of four offspring in mothers that had measles during pregnancy developed severe Crohn’s later in life. Of note is that recurrent antibiotic-resistant pneumonia preceded the Crohn’s in every case.

9 Tips to Manage Your Fatigue With Ulcerative Colitis

This is important because antibiotics are known to increase the risk of fungal infection. Another study highlights this fact: an eight-year-old girl who was treated with antibiotics for recurrent upper respiratory tract infections developed intestinal candidiasis, an overgrowth of the yeast Candida albicans, in the gut.

Other scientists have found carbohydrates to be a possible culprit. Two of three worldwide studies found the average intake of carbohydrates (including bread, potatoes, and refined sugars) to be much greater in those who developed IBD/Chron’s than in those who did not.

In her book, “Breaking the Vicious Cycle,” Elaine Gottschall describes the cycle of intestinal mucosal injury, impaired digestion, malabsorption, bacterial overgrowth, and increase in bacterial by-products and mucous production, which lead back to intestinal mucosal injury. We all know that antibiotics can alter the normal intestinal flora or bacteria. These bacteria usually keep in check the relatively small amount of existing yeast in the intestines.

However, when antibiotics are taken for various purposes–and you can bet those kids in Dr. Wakefield’s study were given plenty of antibiotics–the normal, protective bacteria are eliminated, and yeast growth goes unchecked. The resulting effects range from “mild diarrhea to severe colitis, or systemic fungal or bacterial dissemination.”

When fungi become systemic from gut inflammation and the overuse of antibiotics, you can see how the whole body–again, the eyes, liver, gallbladder, muscles and joints, kidneys, and skin–becomes involved in inflammatory bowel disease.

Still other scientists have directly implicated yeast and fungal toxins, called mycotoxins, in the cause of Crohn’s disease. Former World Health Organization expert Dr. A.V. Costantini has found that people with Crohn’s often have aflatoxin, a mycotoxin made by Aspergillus molds, in their blood. Barclay found that disease activity in patients with Crohn’s was lower while they followed a yeast-free diet, specifically avoiding baker’s and brewer’s yeasts.

Mycotoxins are commonly found in our grain food supply. Mycotoxins can suppress our normal immune function. Therefore, anyone who has taken an antibiotic or consumes grains or sugar qualifies as a potentially immunocompromised person.

We’ve seen thus far that, in just about every case of inflammatory bowel disease, conventional treatment involves the use of anti-inflammatories. Well, researchers at the Washington University in St. Louis took a bold step and did a study where they offered patients with Crohn’s disease an immune stimulant instead. They used a medicine called Leukine–a naturally-occuring molecule called Granulocyte-Macrophage Colony Stimulating Factor (GM-CSF).

And though they faced harsh criticism from scientists at other universities for doing this, they obtained amazing results: of the initial 15 patients in the study, 12 did “significantly” better overall, while eight went into complete remission! Every one of the half a million patients with Crohn’s disease in America should know about this study.

But they shouldn’t feel they need to rush in to their doctor’s office to get this expensive shot (it costs around $300 per milliliter–that’s $1,500 per teaspoon).

Rather, they should learn from this study: by giving an immune booster, these doctors were able to put 53 percent of the cases into total remission. That almost implies that an infection is at the root of the disease, and that by assisting the body’s immune system the medication helped the body overcome the “infection,” or the disease.

Typically, an anti-inflammatory medicine merely controls the symptoms of the disease–it doesn’t cure it. That’s because it rarely addresses the true cause of the disease. In other words, if the wrong diet is constantly consumed, or if damage (i.e. yeast overgrowth) is never reversed from previous antibiotic use, a cure can almost never be achieved. In this case, we feel that the “infection” in the intestines of Crohn’s patients is caused by fungi and their mycotoxins.

Incidentally, you can boost your immune system much less expensively and without a prescription by taking beta-glucans (see seagateproducts.com or nsc24.com). Using probiotics–Lactobacillus acidophilus, etc. (see natren.com)–is also extremely vital in reversing antibiotic damage, since these good bacteria can keep yeast and fungi from re-establishing themselves in the intestines.

Anyone who has been diagnosed with ulcerative colitis or Crohn’s disease knows the misery these diseases can cause. Given the alternatives for treatment–more immune-suppressing drugs and surgery–we think it would be worth a trial on a program that includes a low-carb diet and antifungal medications or supplements. A 1944 Johns Hopkins Clinical Mycology book stressed the importance of following a low-carb diet while treating yeasts. If a fungus or mycotoxin is truly involved, all of these approaches will do more than just suppress the symptoms of or “manage” the disease–they can actually cure it.