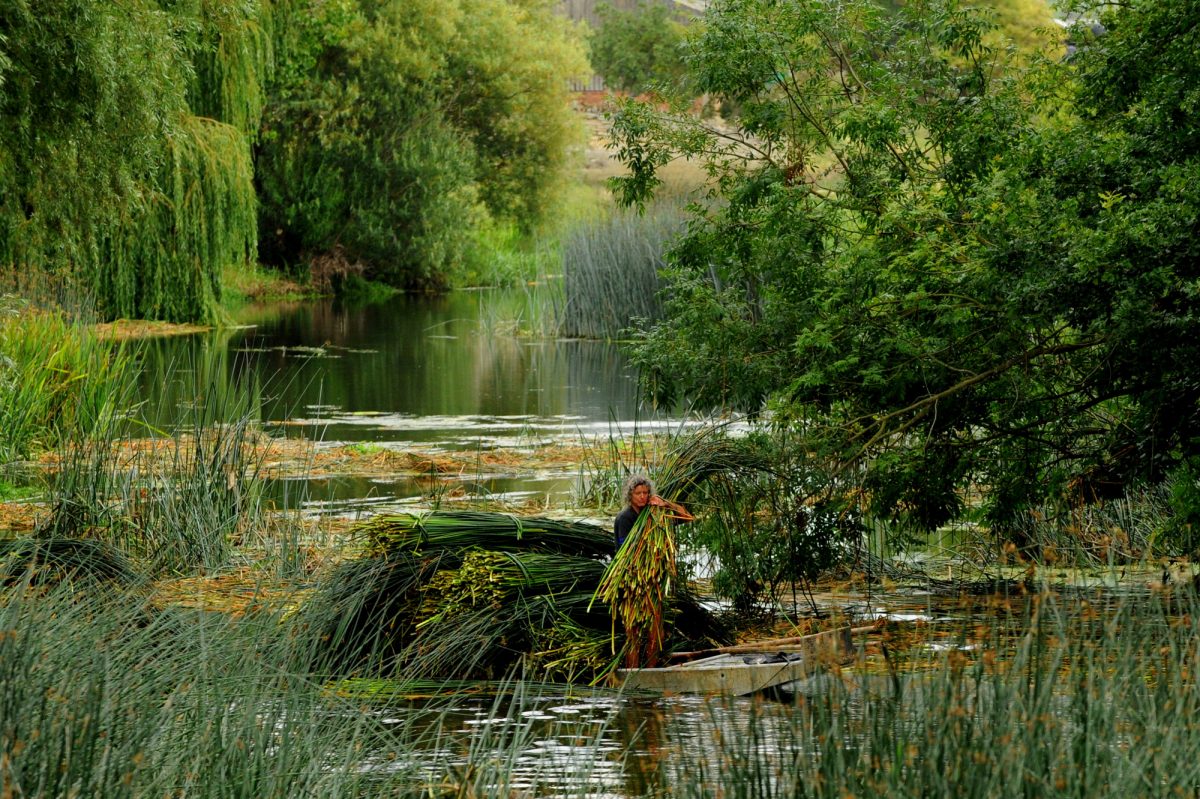 The Fate of Rush Matting in the Hands of Felicity Irons

Felicity Irons is one of the last rush matters working in the UK and runs the only business that does the whole process from harvest to home product, she says. In 2017, she was awarded a British Empire Medal, a national honor, for her work.

Not only has Irons created a sustainable local business based on the traditional craft of harvesting and plaiting bulrush by hand, but she’s reinvigorated a craft that had nearly disappeared if it were not for a fateful meeting on a rural riverbank.

Irons first taught herself how to repair rush-seated chairs from an old craft book while recovering from a car accident some 20 years ago. Irons’s parents were both in the antiques trade: Her mother was an upholsterer, and her father a cabinet maker and French polisher. (French polishing is a specialized technique that brings a high-gloss finish to wood.)

“There were always bits and pieces around, so I taught myself on a chair, and because of their background, I realized I could get work repairing rush-seated chairs in the antiques trade. I remember I undid my first chair three times before I felt it was good enough to actually accept money from a client for it. If I saw that chair again, I would probably be disgusted,” Irons recounts.

After Irons realized she could make a living from her love of the river and its rushes, she started the Rush Matters workshop with a small business loan and grant. She initially set it up to make small goods for local markets, and simply to repair rush chairs. But everything changed when Irons met Jack, the brother of Tom Arnold, her rush merchant and a builder of punts, narrow flat-bottomed boats.

The Arnold family had a history of cutting bulrush dating back to about 1700.

One time when Irons went to Tom’s place, she discovered that Tom had passed away. As Tom’s brother Jack didn’t want to continue the business and had no children to take up the family tradition, Irons wondered what would happen. Jack simply turned to her and suggested that she take it on. But, having just set up her own business, Irons had no funds to buy another. Jack simply said, “No, it’s not like that. It’s not necessary. Come on, let’s get out on the water.”

Two hours later, after a lesson in punting and bulrush cutting, Irons dropped Jack off on the riverbank. And with a “Right gal, I’ll get off now,” he walked home, while Irons carried on, punting up the river. At this point, she not only owned a company that made and restored rush products, but she adopted one family’s traditional business and became a rush merchant. That’s how Rush Matters, as it is now, was started—with the gift of a business and a twist of fate.

Now, Irons employs three full-time and two part-time staff members, and the majority of their work is making rush matting, log baskets, tableware, hats, and shoes. Her clients are mostly interior designers, architects, and the occasional fashion house. She’s currently working with British luxury leather-brand Mulberry and has a major project with a UK hotel, fitting out 30 rooms with rush products.

The old English tradition of harvesting and weaving bulrush looks like it is here to stay. Irons shares how she came to be passionate about the rush, and the importance of continuing this craft:

In this country, it’s medieval matting or rush matting. They call it apple matting in the States, because there was a company who used to cut rush, and in the winter they grew apples. They were trying to find something for [the company] to do in the summer months, so they started weaving rushes.

It’s an incredibly ancient technique which was found all over; well, wherever anyone had access to the river, people would’ve woven rushes. Certainly if rush was available, you’d have rush strewn on the floor. So it wasn’t [just] woven, and, in other parts of the country, you would have had straw because that was more accessible to you. You’d have had houses probably with earthen floors, certainly in rural locations. In the summer it meant it was less dusty, and in the winter it was warmer. Not that long ago really, one end of the house would have had cattle in, and you would’ve lived in the other end of the house.

I’m also a rush merchant, so I sell the rush to other people who do chair seating or who are basket makers. For a number of years now, we have supplied Speyside Cooperage up in Craigellachie [in Scotland]. They use it in the cask making. When they’re repairing a cask for the whisky, they will split open a piece of rush, put it in between the staves of the cask, and it acts as a gasket. As the oak expands and contracts, [the cask] remains watertight because of the rush, and that’s been done for centuries.

The Epoch Times: What’s the process from harvesting the rush on the river to the finished product?
Ms. Irons: We start on the river tomorrow, and we cut for five or six weeks, and we cut two tonnes [approximately 2.5 U.S. tons] of rush a day. I have four punts now. My brother Davey comes down for Scotland every year to cut with me because it’s piece-rate payment, so you are paid by how many bolts you cut a day, which is very traditional to rush cutting. He’s my human combine harvester. My boyfriend Ivor also comes out … and we have a new recruit this year called Charlie, who’s 18 years old. They’ll be four of us out, and everything is hand-cut, and there is no mechanization at all in any part of the process.

We don’t ever cut in the same place two years in a row because we like the rush to really grow back well, so we leave it three of four years before we go back to any one place. Where we’re cutting this year, we haven’t been for four years.

We cut five days a week, and we are entirely weather dependent; if it’s absolutely pouring with rain, we don’t cut because it is really miserable on the river, and you get very, very cold.

The weather at the moment is ideal because not only is it nice cutting in warmth, but we dry our rushes on a hedge. We rely on the elements for drying; we don’t use any chemicals for anything. Nothing’s changed really over the centuries. We’re doing things exactly the same.

At the end of the six weeks, we’re shattered and can barely talk to anyone. When I leave the river, it’s almost a sort of mourning I go into. I hate leaving the river. But then I’m also really excited to be using the new season’s rush; there’s always positives.

Then, we stand the rush up on a 500-meter-long hedge [about 550 yards long], which is near, just by the workshop here. The rush is turned every day until it’s dry. We need to turn it so it is evenly dry throughout the whole bolt, or “measure,” of rush [approximately 5 pounds].

Then we tie it up into bolts, and then we put it into my barn, which I rent. It’s a 14th-century barn, and we then use the rush. We wet it again to work with it. It needs to be nice and moistened, so it’s a bit like suede or velvet to work with.

Then, when it’s worked, you then have to let your design entirely dry before you trim it. So we’ve got 50 meters of plaiting outside now drying on the ground. And then once the plaiting is dry, it can be sewn.

The Epoch Times: What do you think the future for traditional rush weaving looks like?
Ms. Irons: The rush cutting—I don’t know. I’m 51; I’m not going to give up. Certainly Tom Arnold, whom I took over from and who I used to buy my rushes from, his mother cut until she was 72. Now, that’s my aim.

Tom’s family were from a village called Holywell, near St. Ives in Cambridgeshire now Huntingdonshire, and they’re real riverfolk. They’re dying out. He used to have all the students over from Cambridge University because they could earn good money, you see. Because again, you cut more, you earned more. They’d go out in the mornings and then come back, and he’d have the pints of beer lined up on the riverbank for them. He lived right next to the pub. He was a tremendous, fantastic chap.

I don’t know what will happen about the rush cutting. I’ve resurrected it, and it’s not going to disappear, that’s for sure. In the workshop, Demi, she came as my apprentice. This September, she’ll have been with me six years. And Adam, he’s 32; he’s been with me 10 years. I am hoping they will stay.

It’s not going to disappear. I won’t let that happen.

The Epoch Times: Why do you think it is important to preserve traditional craftsmanship?
Ms. Irons: History is so important, and technology is doing its best to take over absolutely every part of our lives. But using your hands is absolutely vital in a way other than using a keyboard or an iPhone or whatever. People are losing that skill to actually know how to use the 10 digits, and that shouldn’t happen.

Our business is busier than we’ve ever ever been, and I think that’s a very good sign that people are coming back to actually what’s important. We live in this society where everything is so fast and so immediate. It’s here and gone, if you see what I mean. So something substantial that’s going to last you 70, 80 years is, I think, really important.

And for me, I suppose, my ethos is that it has to have been really well-made, the quality has to be exceptionally high. And it has to be beautiful; but most importantly, it has to be practical. We don’t make art objects. We’re artisans; we’re not artists.

The Epoch Times: What do you want people to know about craftsmanship that they didn’t know before?
Ms. Irons: I suppose our greatest problem is that clients don’t appreciate how long it takes to make items—the time that goes into something, and the value of that in monetary terms. They should appreciate craftsmanship. That’s what I want people to understand.

The Epoch Times: Any last words?
Ms. Irons: To me, I couldn’t dream of doing anything else. I’m probably working harder than I’ve ever ever done, seven days a week, but I don’t get bored. I don’t dread going into work.

Something interesting that I heard the English gardener Monty Don say was that the day when he doesn’t get his hands dirty, there is an imbalance in the world, and I feel that as well. … I don’t know. It sounds a bit grandiose: I hate it when I can’t actually get my hands dirty with rush. I feel as though—even though it’s vital that I invoice people, I give a quote to people, I talk to people, all that sort of stuff—I still want to get my hands round some rush. I still find it incredibly exciting.