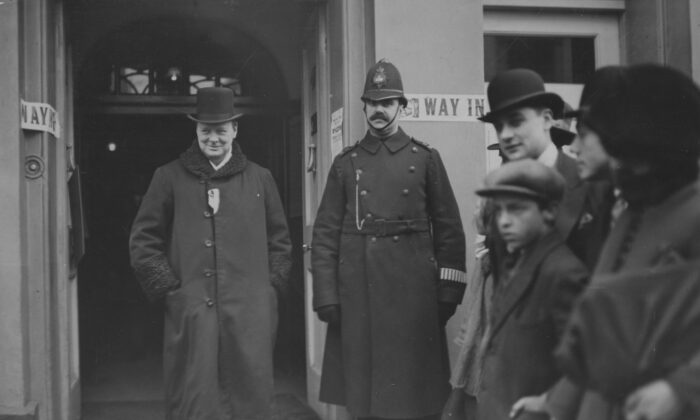 Winston Churchill outside a polling station, circa 1924. (FPG/Getty Images)
People

The Education of Winston Churchill

Some lessons in learning
By Jeff Minick

His aristocratic father ignored him except when complaining of his behavior. His mother enjoyed dances and men, but also kept her son at arm’s length. His teachers praised him for his intelligence and promise, but nearly all of them faulted him for failing to reach his potential.

His contemporaries often disliked this boy for his self-regard, his refusal to conform to school rules, and his love of argument and debate. Excepting the study of literature and history, he fared poorly in every school he attended, so much so that there was no question of his entering the better universities. Instead, he enrolled in a military college, and even then nearly failed to win admission.

When he was in his teens, most of those who knew him, including his father, believed that little good could come of Winston Leonard Spencer Churchill (1874–1965).

A Poor Student and a Rebel

At age 7, very much against his wishes, Churchill was sent to St. George’s School near Ascot. There, as the headmaster noted in letters to Churchill’s mother, Jennie, he was often “very naughty” and “gave a great deal of trouble.” This disobedience brought harsh floggings. When Mrs. Everest, Churchill’s nanny and chief confidante throughout his youth, discovered the welts and cuts on the boy’s back and bottom, she promptly summoned Jennie. Outraged, Jennie straight away withdrew Winston from the school and entered him into a small school operated by two sisters in Brighton.

Here physical punishment was infrequent, and though he continued to perform poorly in subjects such as Latin, Churchill excelled in literature and history.

He next entered Harrow, where he was assigned to the lowest form. Once again, he misspent his education, tackling with high spirits those subjects he found attractive and ignoring the study of Latin, Greek, and mathematics. Here, as biographer William Manchester tells us: “Winston was a baffling boy. He couldn’t, or wouldn’t, learn the ablative absolute—a minor feat of memory—but he could recite twelve hundred lines of Macaulay without missing a word.”

Manchester then notes that one Harrow teacher “came close to the truth” when he reported of Winston: “He was not an easy boy to deal with. Of course, he had always a brilliant brain, but he would only work when he chose to and for the matters he approved of.”

After leaving Harrow, Churchill twice failed the entrance exams for the Royal Military Academy, Sandhurst, but crammed with a tutor and passed on his third attempt.

So, what lessons regarding education can we take away from such a poor example of a student?

We Learn What We Love

Throughout his school days, Churchill was in fact learning, though often the subjects were absent from any school syllabus. He was a keen student of history, for example, so much so that he scored extraordinarily high marks on that part of the exam for Sandhurst. Because of his father’s political involvement, from an early age, he also took a great interest in the affairs of his day, both in Britain and abroad.

Poetry and the English language also moved him. On his own, he memorized reams of verse, much of which stuck with him for the rest of his life, and he loved debate and speechmaking. In his early teens, Churchill was reading the likes of Thackeray and Wordsworth and was developing that large vocabulary and the cadence of language that would one day win him international fame.

While at Harrow, he also threw himself into carpentry class, kept a colony of silkworms, and continued to build his stamp collection. Though he disliked team sports, he enjoyed swimming, boxing, and fencing.

As Manchester writes: “Churchillian stubbornness, which would become the bane of Britain’s enemies, was the despair of his teachers. He refused to learn unless it suited him.”

But when it did suit him, Churchill excelled.

The boy who would later command and lead a nation through a horrific war organized his own battles in a playroom equipped with thousands of lead soldiers where, as one friend remarked, “Altogether it was a most impressive show, and played with an interest that was no ordinary child game.”

Away from the rigors and structure of formal school, Churchill, his brother Jack, and some cousins would build elaborate forts and engage in combat. On one vacation, Churchill directed the construction of a fort with a moat and a working drawbridge.

A cousin later remarked, “We thought he was wonderful, because he was always leading us into danger.”

Children learn through play. The boy who led his cousins and friends into danger would one day be leading his country through perils unimaginable to them.

Here is perhaps the most important takeaway for students and educators.

When Harrow assigned Winston to a remedial English class, instructor Robert Somerville gave his charges excellent instruction in grammar and composition. Because of his ongoing resistance to Latin and Greek, Churchill spent three terms in Somerville’s class. Later Churchill recalled: “I had three times as much of it. I learned it thoroughly. Thus I got into my bones the essential structure of the ordinary British sentence—which is a noble thing.”

Not only was it a noble thing, but it gave Churchill the tools to become a journalist, a writer of many books, a winner of the Nobel Prize, and a leader whose words were weapons in war.

And suppose Churchill had attended Oxford rather than Sandhurst? Would he have become the prime minister known as the “British Bulldog?” His father had accounted him lacking the intelligence to enter the law, a misjudgment for which freedom lovers everywhere should be grateful. Sandhurst started Churchill on a series of adventures that eventually won him a seat in the House of Commons.

Of Churchill’s years at Harrow, Manchester remarks, “Winston was being taught to teach himself.”

This should be the end of all education. In Churchill’s case, this tutelage came about in spite of school and his parents.

Like Churchill’s masters at Harrow, particularly those who tried in vain to teach him Latin and Greek, as a teacher I found myself frustrated by the lackluster performances of some students. Yet I also reminded myself, and quite often my classes, that while academics are important, in the real world, talent, ambition, character, and even looks count for more than having read the Aeneid.

And I have seen that truism at work. That shy kid who always sat at the back of the room and was mediocre in literature class is today a successful insurance agent who includes me among his clients. That girl who struggled with world history is a physician. That student who performed abysmally in Latin is now the youngest member of the U.S. House of Representatives.

Our young people need at least the rudiments of education—math, science, history, and so on—and sometimes we must push them to learn certain subjects. At the same time, let’s look for and nourish those gifts they all possess.

Note: Though I’ve read several Churchill biographies, my favorite remains William Manchester’s “The Last Lion.” The direct quotes in this article come from Volume I of that trilogy.