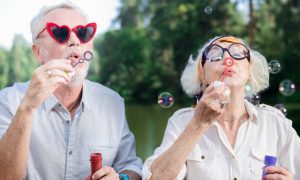 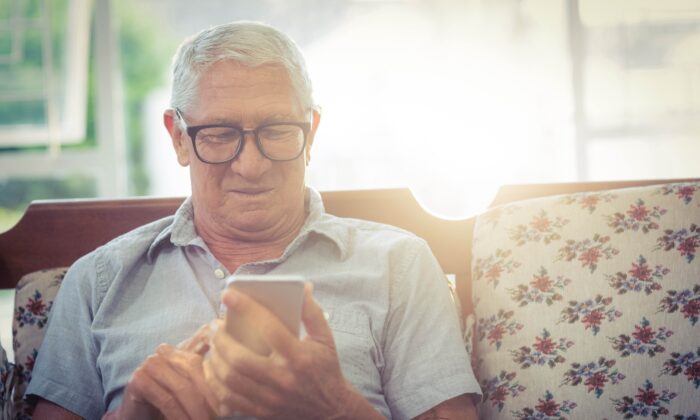 Smartphones offer seniors a link to loved ones—and a gateway to a world of scams. (wavebreakmedia/Shutterstock)
Lifestyle

The Delicate Issue of Taking Away a Senior’s Smartphone

At first, Dr. Robert Zorowitz thought his 83-year-old mother was confused. She couldn’t remember passwords to accounts on her computer. She would call and say programs had stopped working.

But over time, Zorowitz realized his mother—a highly intelligent woman who was comfortable with technology—was showing early signs of dementia.

Increasingly, families will encounter similar concerns as older adults become reliant on computers, cellphones, and tablets: With cognitive impairment, these devices become difficult to use and, in some cases, problematic.

“Deciding whether to block their access to their bank accounts, stocks, and other online resources may present the same ethical dilemmas as taking away their car keys.”

The emergence of this issue tracks the growing popularity of devices that let older adults communicate with friends and family via email, join interest groups on Facebook, visit virtually via Skype or FaceTime, and bank, shop, take courses, or read publications online.

Already, some physicians are adapting to this new digital reality. At Johns Hopkins Medicine, Dr. Halima Amjad, an assistant professor of medicine, now asks older patients if they use a computer or smartphone and are having trouble such as forgetting passwords or getting locked out of accounts.

“If there’s a notable change in how someone is using technology,” she said, “we would proceed with a more in-depth cognitive evaluation.”

At Rush University’s Alzheimer’s Disease Center in Chicago, neurologist Dr. Neelum Aggarwal finds that older adults are bringing up problems with technology as a “nonthreatening way to talk about the trouble with thinking.”

“Instead of saying, ‘I have issues with my memory,’ people will say, ‘I just can’t figure out my smartphone’ or ‘I was trying to start that computer program and it took forever to get that done.’”

If the person previously used digital devices without difficulty, Aggarwal will try to identify the underlying problem. Does the older adult have problems with vision or coordination? Is she having trouble understanding language? Is memory becoming compromised? Is it hard for her to follow the steps needed to complete a transaction?

If using technology has become frustrating, Aggarwal recommends deleting apps on cellphones and programs on computers.

“The anxiety associated with, ‘Oh, my God, I have to use this and I don’t know how’ totally sets people back and undoes any gains that technology might offer,” she said. “It’s similar to what I do with medications: I’ll help someone get rid of what’s not needed and keep only what’s really essential.”

Typically, she said, she recommends no more than five to 10 cellphone apps for patients in these circumstances.

When safety becomes an issue—say, for an older adult with dementia who’s being approached by scammers on email—family members should first try counseling the person against giving out their Social Security or credit card information, said Cynthia Clyburn, a social worker in the neurology division at Penn Medicine in Philadelphia.

If that doesn’t work, try to spend time together at the computer so you can monitor what’s going on. “Make it a group activity,” Clyburn said. If possible, create shared passwords so you have shared access.

But beware of appropriating someone’s passwords and using them to check email or online bank or brokerage accounts. “Without consent, it’s a federal crime to use an individual’s password to access their accounts,” said Catherine Seal, an elder-law attorney at Kirtland & Seal in Colorado Springs, Colorado.

Ideally, consent should be granted in writing.

With his mother’s permission, one of Zorowitz’s brothers—a physician in Baltimore—installed GoToMyPC, an application that allowed him to remotely manage her computer. He used it to reset passwords and manage items on her desktop and sometimes to order groceries online from Peapod.

Eventually, Selma Zorowitz lost interest in her computer as she slipped further into dementia and spent the end of her life in a nursing home. She died in 2014 at age 87.

Older adults with Alzheimer’s disease commonly turn away from digital devices as they forget how to use them, said Dr. Lon Schneider, a professor of psychiatry and neurology at the University of Southern California.

More difficult, often, are situations faced by people with frontotemporal dementia (FTD), which affects a person’s judgment, self-awareness, and ability to assess risk.

Sally Balch Hurme’s 75-year-old husband, Arthur, was diagnosed with FTD  in 2015. Every day is a struggle to keep him safe in a digital world full of threats.

Hundreds of emails pour onto Arthur’s cellphone from telemarketers with hard-to-resist offers. His Facebook account is peopled with “friends” from foreign countries, all strangers. “He has no idea who they are. Some of them are wearing bandoliers of ammunition, holding their guns,” Hurme said. “It is horrific.”

What steps has she taken to manage the situation? With Arthur’s permission, she unsubscribes him from accounts that send him emails and removes friends from his Facebook account. On his cellphone, she has installed a “parental control” app that blocks him from using it between midnight and 6 a.m.—hours when he was most likely to engage in online activities. There’s also a “parental control” setting on the TV to prevent access to “adult” channels.

Instead of an open-ended credit card, Hurme gives Arthur a “stored value” card with a limited amount of money. She manages household finances, and he doesn’t have access to the couple’s online banking account. Credit bureaus have been told not to open an account in Arthur’s name.

If Hurme had her way, she said, she’d get rid of Arthur’s cellphone—his primary form of communication. (He has stopped using the computer.) But “I’m very sensitive to respecting his dignity and letting him be as independent and autonomous as possible,” she said.

For all the dangers it presents, “his phone is his connection with the outside world, and I can’t take that away from him.”