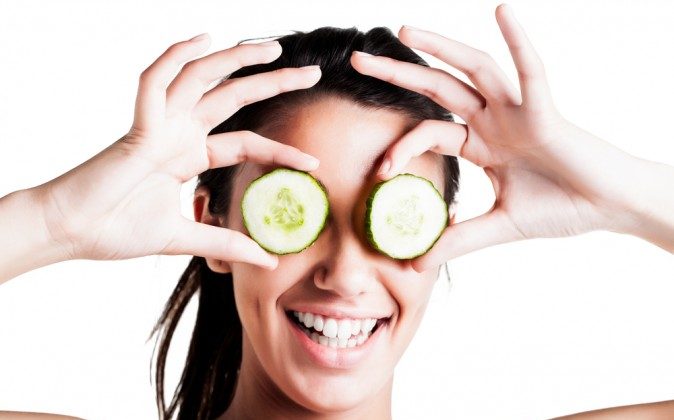 13 Fun Facts About the Cool Cucumber

Americans don’t traditionally consider everyday foods as medicine.  But maybe we should take a few clues from Asian and Mediterranean societies that eat this cool food at the height of the hot weather.

Cucumber isn’t sold in pharmacies but it should be. In Chinese Medicine, cucumber is considered to have heat-dissipating, diuretic, laxative, and detoxifying effects.

The first recorded medicinal use of cucumbers was in the 7th century. Its major uses continue today and include: the treatment of excessive thirst, sore throat, laryngitis, acute conjunctivitis, and burns. In most Chinese homes, however, whether eaten raw or cooked as a soup, cucumber is used only for keeping cool in summer, when it is in season, or in early autumn to soothe dry lips and throat.

Because cucumbers have natural cooling properties according to Chinese Medicine food theory, they shouldn’t be eaten during the cold  winter months.  During the winter we need foods with warming properties.  The cooling properties of cucumbers also make it a perfect natural detoxifier, so stop throwing money away on detox programs and eat some cucumbers now that it’s summertime.

Modern medical researchers found that cucumber is rich in vitamin E, which helps fighting against aging. Women like to put cucumber juice or film on the face to smooth skin and reduce wrinkle. Cucumber also contains vitamin B1, which is essential for our brain and nervous system.

Chinese Traditional Medicine (TCM) believes cucumber has the ability to soothe the nerves and aid in the treatment of insomnia.  This makes perfect sense because we all sleep better when our bodies are cooler and cucumber is one of the coolest vegetables. Studies also show extracts of cucumber seeds and stems may have an effect on high blood pressure.

Wow, all this from a little vegetable you can find at every farmers market during the summer months.

What else is cucumber good for?  Here a list and some fun facts:

2. Feeling tired in the afternoon, put down the caffeinated soda and pick up a cucumber. Cucumbers are a good source of B Vitamins and carbohydrates that can provide that quick pick-me-up that can last for hours. They also keep the body cool during the day which helps eliminate the need for sleep aids at night.

3. Tired of your bathroom mirror fogging up after a shower? Try rubbing a cucumber slice along the mirror, it will eliminate the fog and provide a soothing, spa-like fragrance.

4. Are grubs and slugs ruining your planting beds? Place a few slices in a small pie tin and your garden will be free of pests all season long. The chemicals in the cucumber react with the aluminum to give off a scent undetectable to humans but drive garden pests crazy and make them flee the area.

5. Looking for a fast and easy way to remove cellulite before going out or to the pool? Try rubbing a slice or two of cucumbers along your problem area for a few minutes, the phytochemicals in the cucumber cause the collagen in your skin to tighten, firming up the outer layer and reducing the visibility of cellulite. Works great on wrinkles too!!

6. Want to avoid a hangover or terrible headache? Eat a few cucumber slices before going to bed and wake up refreshed and headache free. Cucumbers contain enough sugar, B vitamins and electrolytes to replenish essential nutrients the body lost, keeping everything in equilibrium, avoiding both a hangover and headache!

7. Looking to fight off that afternoon or evening snacking binge? Cucumbers have been used for centuries and often used by European trappers, traders and explores for quick meals to thwart off starvation.

8. Have an important meeting or job interview and you realize that you don’t have enough time to polish your shoes? Rub a freshly cut cucumber over the shoe, its chemicals will provide a quick and durable shine that not only looks great but also repels water.

9. Out of WD 40 and need to fix a squeaky hinge? Take a cucumber slice and rub it along the problematic hinge, and voila, the squeak is gone!

10. Stressed out and don’t have time for massage, facial or visit to the spa? Cut up an entire cucumber and place it in a boiling pot of water. The chemicals released in the steam creating a soothing, relaxing aroma that has been shown to reduce stress in new mothers and college students during final exams.

11. Just finish a business lunch and realize you don’t have gum or mints? Take a slice of cucumber and press it to the roof of your mouth with your tongue for 30 seconds to eliminate bad breath, the phytochemcials will kill the bacteria in your mouth responsible for causing bad breath.

12. Looking for a ‘green’ way to clean your faucets, sinks or stainless steel? Take a slice of cucumber and rub it on the surface you want to clean, not only will it remove years of tarnish and bring back the shine, but is won’t leave streaks and won’t harm you fingers or fingernails while you clean.

13. Using a pen and made a mistake? Take the outside of the cucumber and slowly use it to erase the pen writing. This trick also works great on crayons and markers  kids may have used to decorate the walls!!

*Images of “woman” and “cucumber soup” via Shutterstock