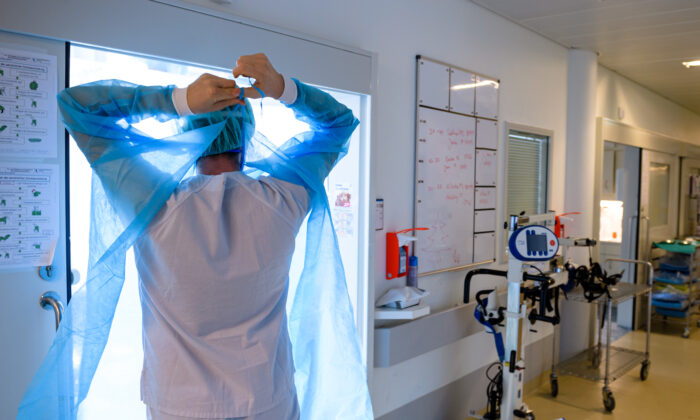 A doctor works in the COVID-19 intensive care unit at a hospital in Leipzig, Germany, on Nov. 18, 2021. (Jens Schlueter/Getty Images)
Viewpoints

For the past 20 years, medical practitioners (nurses and doctors) were ranked the most trusted professions by the Gallup Honesty and Ethics poll. When a patient visits a doctor, he or she can assume that the doctor will only consider treatments benefiting the patient. This is because hundreds of years of medical practice have established a tradition of trust in which the patient believes that the doctor adheres to the ancient Hippocratic Oath (first do no harm) and the modern-day Declaration of Geneva, the ethics of medical practice published by the World Medical Association.

The Declaration of Geneva’s Physician’s Pledge states in part: “I will not permit considerations of age, disease or disability, creed, ethnic origin, gender, nationality, political affiliation, race, sexual orientation, social standing or any other factor to intervene between my duty and my patient.”

Political affiliation should not be a consideration when a doctor sees a patient.

Of course, things are seldom as simple as they seem. Politics and medicine have been around as long as human civilization, and the two have been intermingled at the individual level since ancient times. However, during the COVID-19 pandemic, in the Western world particularly, we have started to see the politicization of medicine at the institutional level, and this should worry us all.

About 1,800 years ago, in ancient China’s Three Kingdoms era, warlord Cao Cao invited renowned doctor Hua Tuo to treat his chronic headaches, thought to be caused by a brain tumor. Hua wanted to open up Cao’s skull to remove the tumor, but Cao suspected that Hua was hired by his political enemies to kill him, so he had Hua imprisoned. Eventually Hua died in prison, and Cao died from the tumor that Hua had sought to remove.

When politics intersect with medicine, the trust between doctor and patient breaks and both parties suffer.

Fast forward to 1949, when the Chinese Communist Party (CCP) became the ruling regime in China. Under the CCP, suspicion such as Cao’s became policy, and everything was politicized. They took control every aspect of people’s lives, from the cradle to the grave.

Amid COVID, authorities in the West have been making medical decisions for millions of its citizens, some even without solid scientific support. As a Chinese Canadian who grew up in communist China, I would like to warn people of the dangers of this unprecedented approach.

My Body, the CCP’s Choice

The CCP even makes a woman’s womb political.

In the 1950s and 1960s, when Mao wanted to increase the Chinese population so that he would have more people to fight American imperialism, women were encouraged to have more babies. I was born during that time, the ninth child in my family.

But in the 1970s, the CCP decided that Mao was wrong, and China had too many people, so they implemented the brutal one-child policy, with forced abortions killing millions each year. That went on for four decades.

Then in 2016, when the regime saw population decline as a threat to China’s economy and to its own power, it wanted women to have more babies again and changed the one-child policy.

The CCP’s flip-flop “family planning” practice is not only inhumane, it failed to achieve the intended goal in some ways. In my case, I was born as part of Mao’s desire to have more people fighting the Americans, but here I am siding with the Western democracies against the CCP’s authoritarian policies.

COVID: a Political Opportunity for the CCP

On Dec. 30, 2019, when Dr. Li Wenliang took to his personal social media platform to alert a few friends and colleagues about this new pneumonia he was seeing in Wuhan, he was punished by the authorities as what he wrote was not politically correct. He later tragically died from COVID-19 himself.

The politically correct narrative at that time was that the new pneumonia cases in Wuhan did not exist. A couple of weeks later, when the CCP could not deny the existence of the cases, they told everyone, including the World Health Organization, that the virus was not transmissible from human to human.

Then, from late January 2020 to March 2020, the CCP’s lies became so crazy that their narratives would contradict one another. On one hand, they locked down Wuhan and prevented domestic travel from the city to the rest of China; on the other hand, they continued to allow international travel from Wuhan to the rest of the world, while accusing anyone suggesting a travel ban from Wuhan as being racist.

Many now believe it was the CCP’s political intention to spread the virus to the rest of the world while trying to control it in China.

The question must be asked: If an international travel ban had been implemented, could the virus have been contained inside Wuhan, thereby avoiding the pandemic and the deaths of more than 6 million people worldwide?

In any case, the CCP’s behavior cannot be explained scientifically—it only makes political sense. And it was aligned perfectly with the regime’s global view. The pandemic could serve as an opportunity to prove to the Chinese people and the world that the CCP system is superior to Western democracy. Through stringent and even draconian lockdowns, and through lies and total media control, the CCP was able to convince the Chinese people that it had stopped the spread of the virus in China. At the same time, the media played up the inefficiency of western democracies as being incapable of controlling the spread of the virus, leading to millions of deaths.

It has been two and a half years since the start of the pandemic, and during that time the CCP has boosted its model of pandemic control. Up until last month, it seemed that the CCP was able to control the spread of the virus—even with the fast-spreading Omicron variant and holding a big international event like the Beijing Winter Olympics. Xi Jinping claimed that the achievement was made possible under his personal vision and leadership. The core of his strategy is zero COVID—eliminate the virus with all of the mighty power of the CCP.

Then late last year, COVID appeared in Xi’an, a city of 13 million people. The city was locked down from Dec. 23, 2021, to Jan. 24, 2022, with a total of only 2,053 COVD cases detected. Although there is no official statistics on the deaths caused by the lockdown, individual cases of death were reported due to lack of access to health care. It was clear that the damage of the lockdown was more severe than the disease itself.

In early March 2022, COVID arrived in Shanghai, China’s biggest city. As no deaths were reported at that time, top scientist Dr. Wenhong Zhang, head of the city’s COVID task force, advocated coexistence with the virus. Given the lessons learned from Xi’an, one would think a lockdown, with all the hardship it brings for people, would not be implemented in Shanghai. Unfortunately, the whole of China is under Xi’s personal leadership, and Shanghai is no exception.

Starting April 3, more than 20 million residents in Shanghai were barred from exiting their homes, leaving many struggling to obtain food, water, and medical care. Stories of deaths occurring as a result of the hardline measures were circulated online. By April 12, at least 15 million residents were still being locked in their homes.

We have no way of knowing how many lives were lost due to the lockdown, but it’s probably in the thousands given the size of the population. Here is one example. Professor Larry Hsien Ping Lang, a Wharton graduate, well-known economist, and TV host in Shanghai who openly endorses Marxist ideology, could not help his mother. She died outside a hospital as she waited for hours for her COVID test result, which she needed to enter the hospital for her routine treatment. The brutal lockdowns affect everyone, including the CCP elites.

Just as Mao’s policy didn’t succeed in forcing me to become a CCP-loving anti-American soldier, Xi Jinping’s lockdowns lack common sense given that the measure has now proven to be useless in fending off Omicron. As a result, we are witnessing another man-made catastrophe happening in Shanghai and possibly other Chinese cities. One can only hope that the zero-COVID lockdown madness stops before more people die. The Chinese people have suffered enough.

With most of the population vaccinated or naturally immune from having been infected by SARS-CoV-2, COVID-19 has become a manageable disease in the United States and Canada. Although it can still be deadly, this now-endemic flu-like disease could be managed with minimal deaths, while society returns to normal life.

In some jurisdictions and sectors, however, masking and vaccination are still mandatory. But why? It doesn’t make any sense at this stage of the pandemic.

In fact, it was the CCP’s tactics that fueled the politicization of COVID, not only in the United States and Canada but pretty much worldwide. This led to the lockdowns, dividing people against one another, governments strong-arming their mandates, and public health officials having far too much control.

We also had the Donald Trump factor. Americans seemed to be divided into two opposing camps: Trump supporters and never Trumpers. With the legacy media in the never Trumper camp, anything Trump supported became controversial, particularly advocating for drug therapy to treat COVID-19.

How far are we from the CCP’s complete politicization of everything in our lives? Warlord Cao’s suspicious approach was passed on to generations of Chinese, but it never became an institutional practice to completely destroy the trust between doctor and patient. When the CCP took control, however, they proceeded to politicize everything and destroyed the doctor-patient trust in just a few short years, because they did it with state power.

If the authorities in the West make politicizing medicine a policy, it could quickly destroy the doctor-patient trust beyond repair. We should never allow what the CCP did in China happen in the free world. We still have some time. We should remain aware and be willing to fight to preserve the integrity of modern medicine.