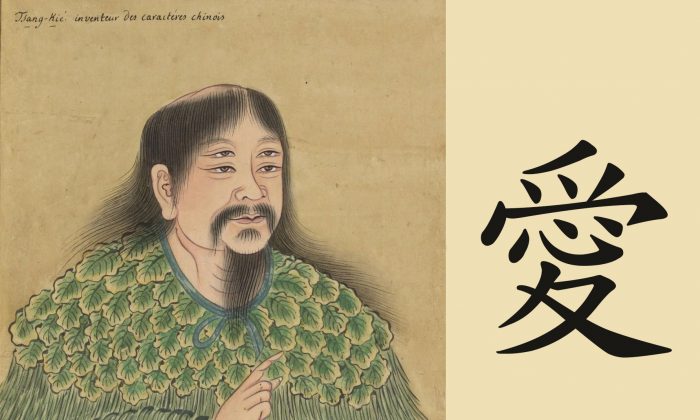 The Chinese Character for Love, With and Without a Heart

New Tang Dynasty Television recently broadcast news about over 100 Taiwanese entrepreneurs living in Shanghai who went back to Taiwan to recruit young people to work at their companies.

When asked why they have to recruit from Taiwan while there are so many talented people in Shanghai, a manager at a human resource company explained with frustration: “It is because of the wolf nature of the youngsters in mainland China.”

He also said that youngsters in Taiwan have greater creativity and more loyalty to the company they work for.

Youngsters of the same race speak the same language on the two shores, so why do they retain the qualities of loyalty and faithfulness embedded in traditional Chinese culture on one side, while on the other side they show a heartless nature?

Perhaps we can find a clue from the Chinese character 愛 (ai), meaning love.

Originally the character 愛 did not have the profound sentimental meaning connected to a human or an event; rather, it was an expression of the gratitude of a hungry man.

At the creation of the character, 愛 was written as 㤅, an expression of gratitude for being granted food. The 旡 in the upper part is like a hungry man with a big open mouth. The lower part is the character 心, meaning heart; it is a literal image of a physical heart.

During the Qin dynasty over 2,000 years ago, an image of a slow pace of walking, 夊, was added at the bottom to show a reluctance to part with something. This completed the ultimate meaning of love.

The key of the character 愛, love, lies in the radical for the heart. If one is truly in love, or is truly grateful, one must do it with a heart.

However, in the simplified version of the Chinese character, the heart in the middle has been removed: 爱.

There are only four strokes in the character 心, heart. It is not complicated to write.

What is strange is that the character 鬼, meaning ghost, which has a negative bearing, has ten strokes. It has not been simplified at all, even in its use as a radical. For example: 魔, demon; 魂, soul; 魄, sub-consciousness; and 魅, a type of evil spirit.

However, there is an exception. The traditional character for ugly, 醜, has the radical 鬼, because the ghost is the ugliest thing; but in the simplified character, the ghost is removed, changing “ugly” from 醜 to 丑.

This makes one wonder if the real motive of simplifying Chinese writing was to undermine the traditional values of the Chinese people.