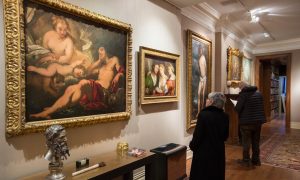 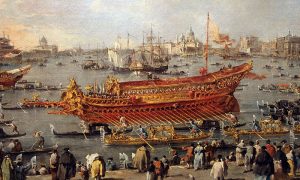 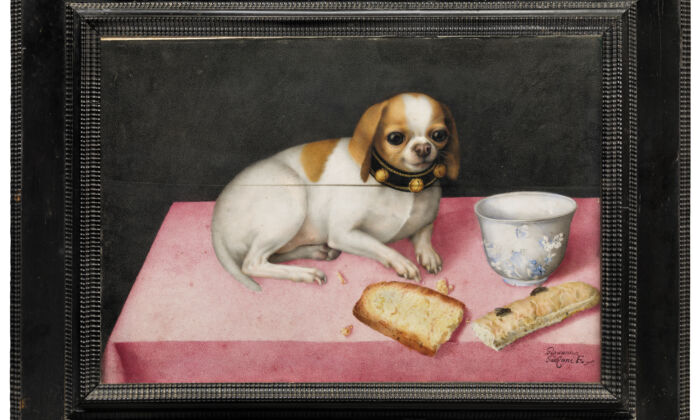 The Charm of Giovanna Garzoni’s Art

An adorable lapdog looks out of a picture frame, as if we’ve interrupted him nibbling on some rather delicious-looking Italian biscuits. He sits attentively on top of a pink table cloth, beside a Chinese porcelain cup. In the short moment that he glances at us, two flies take the opportunity to settle on the food. This rather whimsical painting is an iconic image by Italian Baroque painter Giovanna Garzoni.

This painting is one of the 100 or so works in the exhibition “’The Greatness of the Universe’ in the Art of Giovanna Garzoni,” at the Pitti Palace in Florence, Italy. It’s the largest comprehensive monographic exhibition ever held on Garzoni and reveals new scholarship about the artist.

Garzoni’s charming paintings, illuminations, and drawings are on display alongside many exotic curios and decorative arts of the type she featured in her artwork, such as Renaissance bronzes, tropical shells, and porcelain and ivory pieces.

Garzoni specialized in miniature portraiture, still life paintings with exotic curios, and accurate depictions of the natural world in all its minutiae.

Painting From the Heart

It would be easy to dismiss Garzoni’s work as pretty still life paintings and endearing portraits, yet she is an important personality in Italian painting. Incredibly successful and renowned throughout Europe, Garzoni painted still lifes at a time when the genre was just emerging in Renaissance Italy. This was around the time of the Protestant Reformation, when religious art was forced into decline.

For exhibition curator Sheila Barker, Garzoni’s “starting point is always the heart, the fulcrum of people and things, which she then subjects to almost microscopic analysis. In particular, Garzoni focuses her attention on the exotic items in her patrons’ collections, organizing them in compositions that speak of the growing cosmopolitanism in the life of Europe’s courts and the intense circulation of goods throughout the world,” she said in a press release.

Garzoni lived in the courts of Venice and Turin and frequented the courts of Rome, Paris, and London. Documents recording her as a frequent visitor to the court of King Charles I are exhibited for the first time. And Garzoni’s patrons were among the most prestigious in Europe, for example, the Medicis in Florence, the Barberinis in Rome, and Cardinal Richelieu in Paris, whose portrait by Garzoni is included in the exhibition.

Giovanna Garzoni Through Her Paintings

Born around 1600 in Ascoli Piceno, in the central Italian region of Marche, Garzoni is believed to have learned oil painting from her maternal uncle Pietro Gaia, in Venice, when she was a young girl. Gaia was an apprentice to Palma the Younger, one of the most notable artists of the Venetian school. Garzoni would’ve learned the great Venetian tradition of painting that included great masters such as Giorgione, Tintoretto, and Titian.

Garzoni’s paintings themselves can paint a picture of her artistic life and the influential circle she was part of.

At just 20 years old, she painted herself as the Greek god Apollo. In the painting, Apollo’s characteristic laurel leaf wreath crowns Garzoni’s head, and her long curly hair is loosely tied to one side. Her curls serve as a guide that brings the viewer to the stringed instrument she holds close to her chest.

Apollo, as the patron of music and inventor of stringed instruments, is a fitting character for Garzoni to embody. She sang and played string instruments, even entertaining the Medici court with her music about a year prior to the painting’s completion. Rather aptly, Apollo guides youths as they come of age. Perhaps Garzoni recognized that her career as an artist was being shaped by experiences such as those that she’d just had at the Medici court.

Around the time of her Apollo self-portrait, Garzoni studied calligraphy in Venice and compiled “Libro de’ Caratteri Cancellereschi Corsivi,” a book containing cursive characters. Remarkably, Garzoni completed “Galleon at Sea” with black ink in one continuous curl of a stroke, showing her immense skill as a calligrapher.

As testimony to her artistic talent, one of Garzoni’s first commissions was to paint one of a series of paintings of the apostles, for the church of the Hospital of the Incurable (Ospedale degli Incurabili) in Venice. Tintoretto also painted for the series. Unfortunately, the church was demolished in 1831.

In 1630, she traveled to Naples where she painted for the Duke of Alcalá, a Spanish nobleman and important art collector, who served as the viceroy in Naples. Also under the duke’s patronage was the prestigious painter Artemisia Gentileschi. The two ladies became good friends, with Garzoni treating Gentileschi somewhat as a role model.

In 1635, Garzoni painted a rare portrait when she was at the court of the House of Savoy in Turin. Her portrait of Zaga Christ, who claimed to be an Ethiopian prince, is the earliest known European portrait miniature of a black sitter, said Emma Rutherford, portrait miniatures specialist at the art dealers Philip Mould & Co., on a video on the company’s website.

In the portrait, Zaga Christ is depicted in European dress even though he hailed from Ethiopia. On the back, Garzoni’s signature script is written in both Italian and Amharic, an ancient Ethiopian language. Christ must’ve been a fascinating sitter for Garzoni to paint, with his cocoa complexion and strong black curls. And the conversation might well have been interesting too, as he was in Europe to gain support in reclaiming the Ethiopian throne. He claimed that he was the rightful heir, after his father had been murdered.

In 1639, nearing 40 years old, Garzoni was in Paris, with Cardinal Richelieu as a patron. Her pen and watercolor drawing of a lioness with one eye open was rendered during that time with virtuosity and confidence similar to her earlier galleon calligraphy piece. The lioness is executed with relatively few brushstrokes and pen marks, resulting in a clear, crisp image.

From 1642–1651, Garzoni was in Florence, mostly under the Medicis’ patronage and mainly working in miniatures. In 1648, she painted a miniature of Raphael’s “Madonna of the Chair” (“Madonna della Seggiola”). While Raphael had painted in oils on panel, Garzoni used her favorites: tempera on parchment. She also used a lighter color palette; notably, her Mary wears a cream rather than green shawl, and her Christ Child is adorned in soft peach rather than the gold that Raphael had wrapped him in.

Just a year after her painting of the Madonna, Garzoni used a similar color palette for a different subject in her “Old Man of Artimino.” Here, an old farmer holds two hens, and arranged in front of him are the fruits of his labors: Preserved meats, cheese, eggs, fruits, and vegetables are among his farm animals and wild birds. The rather barren rocky landscape dominates the scene, hinting at a hard rural life.

Garzoni settled in Rome in 1651, although she still took commissions from the Medici in Florence. One of the particularly beautiful still lifes, painted between 1659 and 1660, which seems typical of her exotic flower paintings, is a Yixing vase full of flowers on a marble table between two shells; a butterfly flutters above.

In the bold spirit of her youth, Garzoni had painted herself as Apollo, full of hope at her career ahead. In her old age, one of the leading Italian Baroque painters, Carlo Maratti (the future restorer of Raphael’s art), painted her portrait as testimony to her fame.

Maratti was the principal of the Academy of Saint Luke in Rome, an organization intent on elevating artists (painters, sculptors, and architects) beyond artisans. Garzoni frequented the academy and left her wealthy estate to the academy’s Saint Martina Church on the condition that she would be buried there. Her wish was granted in 1670.

To find out more about “’The Greatness of the Universe’ in the Art of Giovanna Garzoni,” exhibition, which runs until June 28, visit Uffizi.it