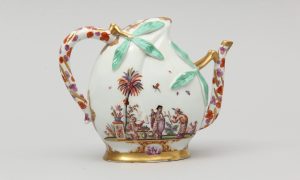 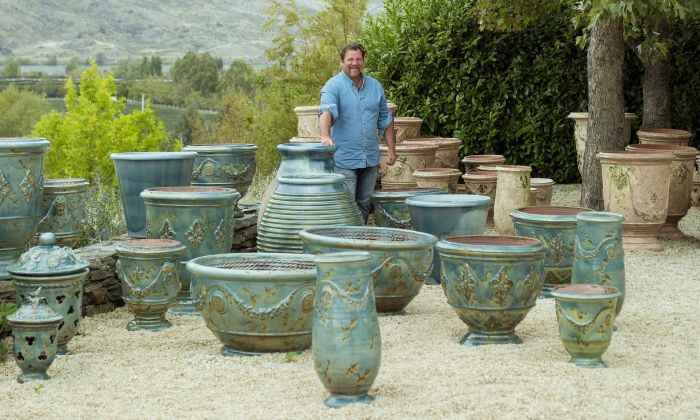 "The French Potter," Yannick Fourbet, with a selection of his horticultural pots at his home on the "Domaine Rewa" vineyard on New Zealand's South Island. (Rachael McKenna)
Craftsmanship

The Centuries-Old French Tradition of Making Pots With Clay, Rope, and Wood

The photographs show an almost quintessential French landscape, where a vast expanse of green grass disappears into a distant mountain range. In the foreground, rows and rows of grapevines are all neatly covered in an ocean of white netting. There are even olive trees and what appears to be a traditional French country house, its brown-gray stone softened by roses, lavender, and bay trees, some of which are in pots.

This is the home of Yannick Fourbet, his Kiwi wife Philippa, and their 3-year-old twins, Augustin and Mortimer. They live not in France, but in the foothills of the Pisa mountain range on the South Island of New Zealand, at their Domaine Rewa biodynamic vineyard and olive orchard. Biodynamic farming is an organic method that also takes into account environmental factors such as the rhythms and phases of the sun and moon.

Incidentally, the French-style house was already there when Philippa bought the property. Maybe it was waiting for Fourbet.

Fourbet first met Philippa in 2012 in the South of France, at his pottery studio Le Chêne Vert (The Green Oak), in Anduze. It was love at first sight: “Philippa fell in love with the pots before she fell in love with me, the potter,” Fourbet said on the phone.

Philippa and Fourbet met again in 2013, this time in London, when Fourbet invited her to the Royal Horticultural Society Chelsea Flower Show, where he was exhibiting his pots.

From then on, they began a long-distance romance, traveling between France and the UK, where Philippa was working in investment banking. And then when Philippa moved to Domaine Rewa, both traveled between France and New Zealand. In 2016, Philippa joined Fourbet in France.

In 2018, the family settled in New Zealand. The primary reason for the move, Fourbet said, was for a good life for the twins: “We want them to grow up in a rural environment with people with good values, and we think New Zealand is a wonderful country for that.”

“We’re both Catholic, and we really believe in achieving something on earth and something positive,” he said.

Le Chêne Vert specializes in Anduze pots, a pot design that dates from 1610 and that was inspired by Italy’s Medici vase. Anduze pots are traditionally made from a mold and decorated by the maker’s medallion and a garland.

Fourbet also makes pots by using an age-old traditional technique that uses clay, rope, and wood. The technique allows him to make huge pots; the largest he’s made has been 772 pounds. Fourbet is limited only by the size of his kiln.

At Le Chêne Vert, Fourbet worked with customers such as Christian Dior and the city of Montpellier, to name a couple. The pottery workshop also supplied Anduze pots for the Trianon garden at the Palace of Versailles. In the 17th century, King Louis XIV’s landscape architect, André Le Nôtre, at Versailles was believed to have commissioned Anduze potters to make pots for the Trianon garden, according to Fourbet.

Here, Fourbet tells us how he began making pottery with clay, rope, and wood and what’s in store for his new pottery venture in New Zealand: The French Potter.

I met him at a ceramic arts festival in a town near where we were making pots in our workshop in Anduze. It was summertime and it was really hot. He was demonstrating how to make his pots. Everybody was willing to watch, but they never really bothered to find out if he was thirsty or not, so I went and got him some water. He was really touched by that.

I started talking to him, because I was physically closer to him. At the time, I had nine employees in France. I said, “I would like to train my staff in this technique that you’re preserving, which is obviously ancestral. Would you be amenable to do that?”  And he said, “Yes, definitely.”

This is traditionally how our skills were transmitted from one generation to another. In the past, oftentimes people took on the jobs that their friends were doing, or that their grandfathers were doing, and this is how you get a generational buildup of techniques.

I would like to be able to do that here in New Zealand if I can. In years to come, if I can share what Serrs has shared with me, with a young man or young woman who is interested, I will gladly do it.

One of the things that I have noticed from living here now for 18 months or so is that there’s one thing that is missing when looking at New Zealand-made crafts: The country has got wonderful natural resources, but they do not add value to their resources because they do not transform them.

I think what is very important to me is this idea of being able to transform a raw material into a finished product and having an opportunity here to sort of participate in a change and a shift in the New Zealand economy at my level, which is only a small business. I can get clay here in New Zealand, and I can transform it with my skills, thanks to Le Chêne Vert, to actually make a Kiwi pot with rope and plywood.

The Epoch Times: How long has the rope technique for making pots been around?
Mr. Fourbet: This technique may have existed in the Neolithic era, but it’s not proven.

I asked the man who taught me where the technique might have come from. He said there used to be a cabinetmaker in a village called Biot in Provence, who showed an interest in making pottery. He used plywood and ropes to shape the pots by coiling the rope around a plywood frame and then by applying clay onto the rope.

Most people think that these pots were used to store oil due to its water-drop shape. I found out recently that this is not true; they were originally made to store grain, and the reason they have this water-drop shape was to prevent mice, rats, and all kinds of pests from getting into the grain.

This is the way the ancestors used to make things. Everything they made had a function as well as an aesthetic purpose. If I had to define my work today, I would say it’s halfway between art and craftsmanship.

The Epoch Times: It sounds like being a traditional craftsman holds a certain responsibility.
Mr. Fourbet: Definitely. It’s some kind of a talent. You’ve got to have a little bit of courage as well because in this day and age, where everything is geared toward technology, you may be led into thinking that doing something with your hands is not necessarily interesting from a financial perspective. The only interest seems to be going toward making more and more money, and we still never learn: The money in itself is not an end.

I don’t want to sound presumptuous, but it’s such a satisfaction to realize five or six pots a day and just to clean up my workshop—and this is probably my favorite part: when I look at what I’ve accomplished at the end of the day, and it has materialized as a pot.

The Epoch Times: How do you make a pot using this rope technique?
Mr. Fourbet: I start by drawing the pot on several sheets of paper so I have the basic shape and an idea of what it’s going to look like in real life.

Then, I cut a whole set of 12 to 25 pieces of plywood that I fix between two discs, along a vertical axis, with one disc on the top and one disc on the bottom, which basically makes a wheel.

I then coil several lengths of sisal rope around this plywood structure, which gives it rigidity, and on the side of the structure I fix a movable board which adjusts the thickness of the pot against the rope.

Then I shape the pot: I apply clay onto the rope itself and slowly turn the plywood and rope frame, scrubbing off any surplus clay and putting it back on the rope as I go.

I then slowly take out the wooden structure and the ropes during the drying process; it usually takes a week to remove all the ropes. If the rope is taken out too early, the pot will collapse. So that’s an interesting part of my work, and one that allows for reflection and meditation as well.

Here, I have to be really careful and make that temperature transition very slow because, otherwise, everything breaks down and explodes in the kiln.

The Epoch Times: What would you like people to know about your work?
Mr. Fourbet: We have our own brand of biodynamic wine, and there are wonderful opportunities for my trade in the wine industry, or so it seems, and that is to be able to make amphoras, clay vessels, in which the Georgians have been making wine for 2,000 years. Where it ticks the box for us is that we’re on a biodynamic vineyard and we will be using clay from the vineyard to make the amphoras for our wine.

A lot of vintners have approached me, since they know that I’m settling here, and they’ve asked me if I will be available to make amphoras for them.

I would like to keep The French Potter a one-man workshop, maybe two people, but I don’t want to grow big. I’m not here to make millions. I’m here to maybe transmit something that I know and also make a good living, sufficient enough so I can provide for my family, and that’s all really.

To find out more visit TheFrenchPotter.co.nz