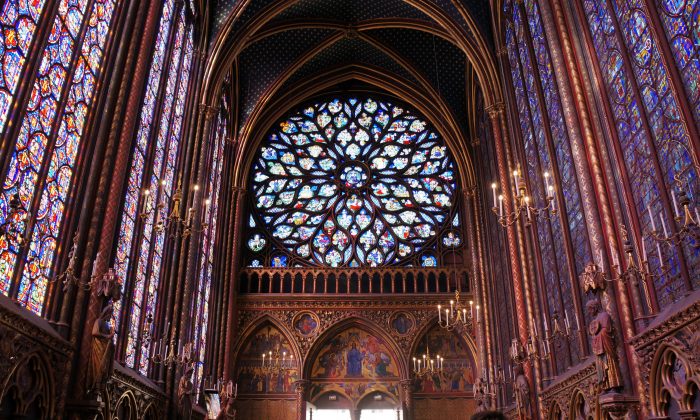 The Breathtaking Architecture of Sainte-Chapelle, Paris

If “breathtaking” were a building, it could very well be the Sainte-Chapelle (“Holy Chapel”) in Paris, the spectacular royal chapel adjoined to King Louis IX’s palace. The chapel was commissioned between 1242 and 1248 to house the Passion relics, including Christ’s Crown of Thorns, which King Louis IX purchased in 1239.

The chapel is a perfect example of Rayonnant Gothic (circa 1240–1350) architecture. It was a style that aimed for structural lightness, where windows almost replaced the walls and flooded the buildings with light, and which favored a repetition of decorative motifs in varying sizes.

Sainte-Chapelle is dominated by huge lancet windows that wrap around the upper chapel and reach up to heaven—well, up to 17 yards, so part of the way. Over the west door of the chapel is an exquisite 15th-century rose window in the Flamboyant style, a florid design of the late Gothic period in France. The window is framed by tracery, the intricate stonework that supports the window, which in this case scarcely seems present.

Colors cloak the walls inside the upper chapel as if it were bejeweled, and the columns between the windows, called bundled colonettes, appear to be part of the stained glass. The walls are just as rich but with paintings and carvings of Christian symbology: There are sculptures of the 12 apostles and sculptural reliefs of angels holding royal crowns and crowns of thorns. Some angels hold censers that were actually used for incense.

Elegant high arches, which typify the Gothic style, define and strengthen the bones of the building and reach up to the vaulted ceiling.

But the secret to the structure is on the outside. Not only do the narrow buttresses take on the bulk of the weight-bearing so that all that glass can stay upright, but these slender structures also avoid blocking the sunlight entering the chapel.