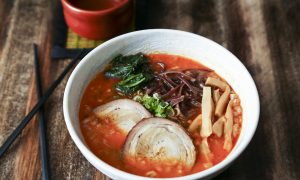 When I was in elementary school in Thailand, on a typical Friday at 12am the lights were all turned off at home, and everyone was asleep. Everything was silent. But in the background, you could hear the singing sound of crickets, mosquitoes flying by, and the fan moving in a circular motion. I had the whole living room to myself, and that’s when the party had started.

I turned on the TV and switched it to Cartoon Network. The party wouldn’t be complete without some food, so I made myself a bowl of instant ramen noodle soup. I cracked an egg on top of the noodles, put the bowl in a microwave for 2 minutes, and that was it- my guilty pleasure. After eating this at midnight, my face would be all swollen the next morning due to having too much salt just before going to sleep, but I thought it was all worth it.

This type of instant ramen isn’t the same as Japanese ramen. The instant ramen noodles that I was crazy about in Thailand was called Mama. It comes in many flavors, and my favorite one is the tom yum. Each package is a portion for one. You can cook it with hot boiling water, in a microwave, or boil it in a pot.

After moving to the US, I was exposed to another type of ramen, the Japanese ramen. It’s a noodle soup dish, consisting of wheat noodles served in a meat based broth, often flavored with soy sauce or miso, and has toppings like sliced roasted pork, bamboo shoots, dried seaweed, and scallions. Nearly every region in Japan has its own variation of ramen.

One of my favorite types of Japanese ramen is shoyu ramen, so I went to Rai Rai Ken in East Village to learn the secret recipe for shoyu ramen from an old friend. “To create a good balanced bowl of ramen, it needs five elements: tare sauce, broth, fat, noodles, and toppings,” said Yo Katsuse, the manager of Rai Rai Ken. He is over 6 feet tall and could easily pass as a giant in the east. While teaching me how to make the shoyu ramen, he tilted his body down, with humble body moments and a bright smile on his face.

Regardless, now I’ve come to enlighten that, in order to make a perfect bowl of shoyu ramen, every step is important, from making the tare sauce, roast pork belly, boiling the broth, to massaging the ramen noodles and cooking the noodles. The following recipe is formatted from the original one to be more user friendly for everyone. It is a portion for four people. You can find the ingredients in any Japanese supermarket.

2. For the pork belly, cut off the skin, and roll it up lengthwise, with skin facing out. Using butchers twine to tightly secure the pork belly at 3/4-inch intervals. Then add 6 tablespoons of oil in a pan, sear pork belly over a high heat. Turn it over and sear until every side is browned, for about 8 minutes. After that, add 6 cups of water and boil it at a medium high heat for about 1 hour until the pork belly is tender and reaches 180 degrees. Remove the pork belly from the stock and let cool. Once it’s cool, slice it across the grain, about1/3 inch thick, and brush the pieces with tare sauce.

3. For the chicken broth, add chicken bones, ginger, dried seaweed, dried shrimp, dried scallops. Bring to a boil, then reduce the heat and simmer for 3 hours.

4. To cook the eggs, bring a medium pot of water to a boil. Add the eggs and boil for 7 minutes. Drain the eggs and flush with cold water to stop them from cooking. After they are cool, peel them and marinate in the tare sauce for 15 minutes. Then cut them into halves, and set aside.

5. To cook the other toppings, blanch the spinach, menma bamboo shoot, naruto fish cake in hot water for about 30 seconds.

6. To cook the noodles, bring a medium pot of water to a boil, massage the noodles with your hands to refresh them, then cook them for 2 to 5 minutes until al dente. Drain all the hot water.

7. Add 1 cup of chicken broth into each bowl, add 3 tablespoons of tare sauce in each bowl, and divide the noodles into 4 bowls. Place the eggs, chashu roasted pork, and other toppings and scallions.

I must say this is an unforgettable bowl of ramen noodles. It’s not just because I helped cook it, but because I’ve realized how much patience and love one needs in order to make a perfect bowl of shoyu ramen. So how was it? The ramen was springy and cooked till perfection. The broth is tangy, salty, and savory. It’s full of the taste of umani and yet still fairly light to the palate. I’m sure that even if I eat this bowl of ramen as my midnight snack, I won’t have a swollen face the next morning. Happy cooking and eating!