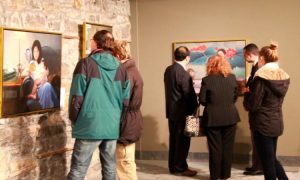 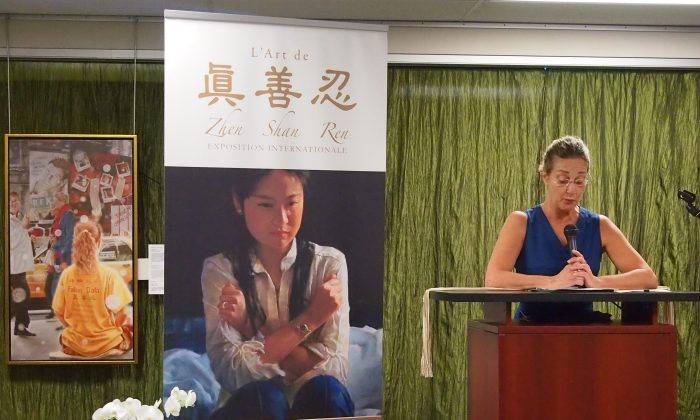 Diane Du Sablon, special assistant to Irwin Cotler, Member of Parliament for Mount Royal, gave a speech on behalf of the MP at the opening of the Zhen Shan Ren art exhibit in Montreal on Sept. 27, 2014. In an interview later, Du Sablon said: “Mr Cotler has worked during his whole life for international justice, human rights. He was elected to Parliament in 1999 … with the intention to pursue this mission. … Mr. Kunlun Zhang was the first Falun Gong practitioner that professor Cotler represented as an MP. His relationship with Falun Dafa started at that moment.” (Nathalie Dieul/Epoch Times)
Arts & Culture

A unique and beautiful collection of paintings was on display at Montreal’s Galerie Lozeau during a five-day exhibition this past week. The Art of Zhen Shan Ren (Truth, Compassion, Tolerance) International Exhibition, which has been travelling the world since 2004, recently wrapped up exhibits in several Canadian cities. Its next stop will be in Edson, Alberta, about 200 km west of Edmonton, on Nov. 1-8.

The artwork includes Western classical oil painting as well as the classical Chinese traditions of watercolour on silk and paper.

The paintings have been acclaimed for both the skill of the artists and the theme of the artwork.

To the trained eye, the works present a rich tapestry of artistic skill that wholly embraces traditional aesthetics. To the untrained eye, the beauty and care contained in each piece does not go unappreciated. Neither does the overarching theme of the exhibition—courage in the face of adversity.

The exhibition owes its genesis to a small group of artists determined to show the beauty of the spiritual practice Falun Dafa, also called Falun Gong. The practice is deeply rooted in Chinese traditions and embraces the essence of China’s rich culture. Espousing the principles of Truthfulness, Compassion, and Tolerance, Falun Dafa is practiced freely all over the world except in China, its country of origin.

The practice was banned in China by the Communist regime in 1999 and has been the subject of a brutal and illegal persecution for the past 15 years. How could something as benign and beneficial as a meditation practice become the target of such prejudice and persecution by Chinese authorities? Many of the artworks address this dichotomy, and viewers usually express that they feel both inspired by the beauty portrayed in the works and bewildered by the absurdity and brutality of the persecution.

Professor Kunlun Zhang, the founder of the exhibit, attended the Montreal gallery opening. He once called Montreal his home and taught art at McGill University. The seasoned artist and Falun Gong practitioner experienced persecution first-hand when he was imprisoned in China for his belief in Falun Gong. His artwork depicts the torment he experienced while in captivity, but also radiates a hope and positivity that comes from a deep faith that justice will prevail.

It is a unique exhibit at a unique moment in history as the advent of technology has made the world smaller and more accessible than ever before. The deeds, both good and evil, of individuals and countries are on display for the world to see. The Zhen Shan Ren exhibit offers a window into the beauty of traditional Chinese culture displayed in sharp contrast to the brutality of the current regime in Beijing.