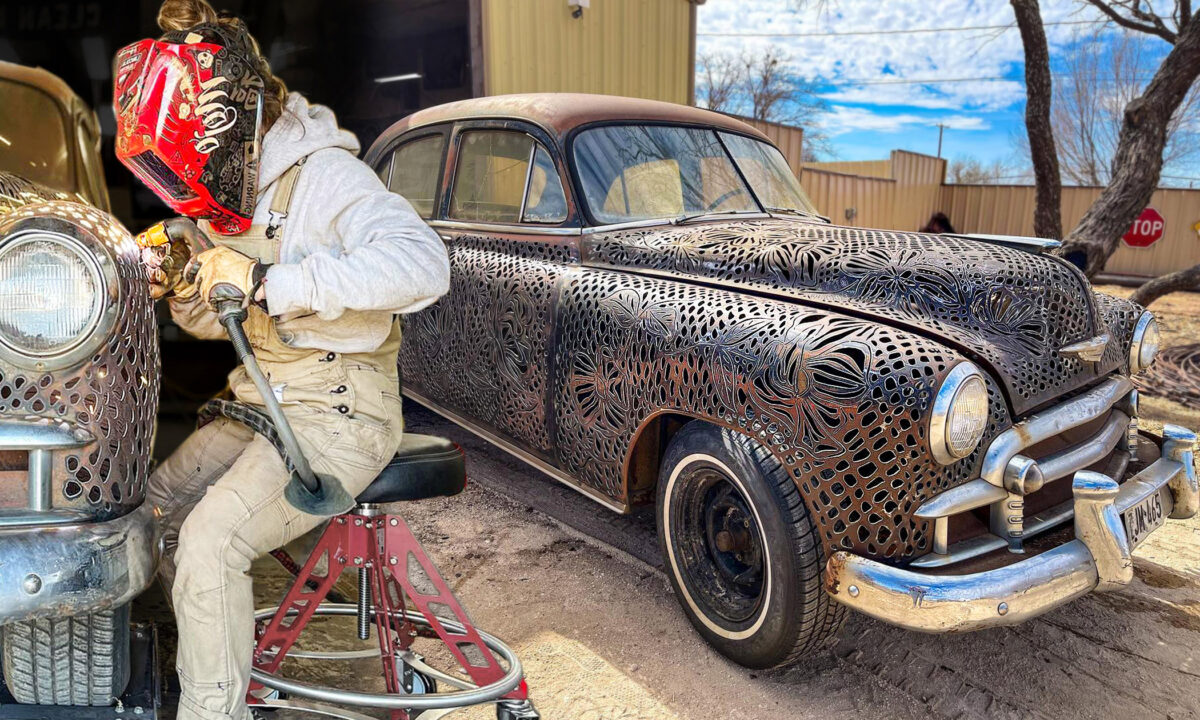 When her cake-making business didn’t quite pan out the way she’d hoped, one small-town Texas gal turned her sights toward tack welding enormous steel sculptures instead.

Swapping her icing pipe for a welder’s torch, 36-year-old metal artist Rae Ripple, from Big Springs, recently welded a work of vintage automobile art, revamping what once sat rusting in a farmer’s field into something hip again. Pictures of her masterpiece went viral on Instagram. With a plasma jet, she cut detailed lace designs into the four-door 1951 Chevrolet Deluxe’s steel body, from bumper to bumper, for an artsy hybrid landing somewhere in between steampunk and Mary Poppins.

To go from cake decorating to tack welding — from flower petals to heavy metal — might sound like a leap, but with Ripple’s colorful background, it makes sense. The native Texan, who spent her earlier years working in trades and firefighting, started welding in a college course, but mostly she learned from hundreds of hours of YouTube and teaching herself. Her cake decorating morphed from painting, to painting on sheet metal, to metal sculpture — Hence the plasma cutter.

And she was doggone good at it.

“I placed in the top, I guess you could say, three of the top welders in the country,” she told The Epoch Times. “I’ve been doing this full time for about three years.”

Ambitious to take her work to the next level, after getting her hot hands on the antique Chevy in January, Ripple lit up her torch and took the challenge. Without any preliminary drawings or sketches, she carved into the car, now dubbed “Phillis Gene.” “A lot of people call me the ‘human CNC machine,’” she said. “I can cut all this stuff freehand, with no tracing, no nothing, just start at one end and work my way to the other.”

For the mom of two, juxtaposing heavy metal with lace adds a personal touch.

“I am still a girl, and so I love girly things, of course,” she explained of that unique nexus where welding meets wedding cakes. “I’m obsessed with dresses, and ballgowns, and fashion in this weird way. And so, in a sense, being able to put a piece of lace on something as masculine as a vehicle … is something that brings that love of fashion, design, and dresses into it.”

Phillis Gene wasn’t Ripple’s first automotive rodeo. Prior, there was a 1950s Apache truck that doesn’t run — unlike the Apache, Phillis Gene is roadworthy. “It’s not going to be a daily driver, it’s going to be a show vehicle,” she said, adding that she had to give her best work for this one, because lots of “important people” in the car restoration scene are going to see it — including mechanical masters the Martin Brothers from TV series “Iron Resurrection.”

The client who patroned the work also plans to finish it. “I was a little nervous on this one,” added Ripple. “He’s putting a new drivetrain in it, he’s completely restoring the interior, he’s going to put bags on it, he’s going to drop it, it’s going to sit on some fat whitewalls.”

She told the newspaper where she derives inspiration for her metal masterpieces.

“Both of my parents were drug addicts, and so I actually ran away from home when I was 14, and I grew up on the streets,” she added. “I had become a product of my environment.”

Determined to rise above all of that, she started working three jobs and painting at nights for gas money.

It’s now all coming together.

“My life and all of the things I carried is kind of what sparked my art and sparked my love for creating art,” she said. “It’s a release, it’s a way to tell my story.”

Born in Fort Worth, Ripple has lived all around the state, but now she, her son, and her daughter call West Texas home. The mom welds heavy metal art for a living.

Besides selling her cars, she’s also sculpted a giant steel armadillo, huge butterflies, massive metal hot air balloons, and dinosaurs. She’s currently working on a replica of the SpaceX SN9. Additionally, Ripple paints, she wrote and illustrated her own children’s book, and even has her own show on Netflix called “Metal Shop Masters,” featuring her welding artwork. All of which she curates and makes go viral on her delicately hardcore Instagram.