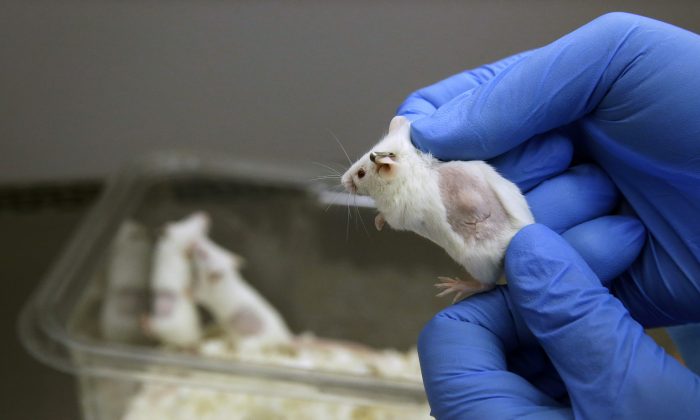 In this Sept. 19, 2014, photo, Charles Cook, manager of facilities and operations at Champions Oncology, displays mouse carrying a cancer patient's tumor graft under its skin in a lab in Baltimore. Cancer patients are paying the private lab to breed mice that carry bits of their own tumors so treatments can be tried first on the customized rodents. The idea is to see which drugs might work best on a specific person's specific cancer. (AP Photo/Patrick Semansky)
Health

Testing Medication on Mice in Competitive Settings Reveals Side Effects

As it turns out, competition may actually be a good thing in particular settings, most specifically, lab rat testing protocols.

Researchers have devised an innovative approach to testing for side effects caused by medications and diet, according to a University of Utah press release.

Their procedures involve using non-inbred wild mice and placing them into a environment in which they must compete with one another for food, mates, and nesting sites. Using this approach helps reveals potential side-effects that are not commonly detected by traditional caged lab rat testing protocols.

SSRIs Taken During Pregnancy May Cause Autism

The researchers constructed a 300-square-foot environment that had six nesting sites. Four of the nesting sites were covered and near feeding stations, and two were mouse slums by comparison, being farther away from feeding stations and uncovered. This is called organismal performance assay, or OPA.

The idea is that healthy mice are competitive mice, and they are going to fight over the better nesting sites. “When they really have to compete directly, males are constantly testing each other and fighting over territories. If they don’t win a territory, females won’t consider them when it comes time to choose a mate,” said Wayne K. Potts, a University of Utah biology professor.

Testing the effects of Paxil

Researchers fed Paxil to mice at 1.8 times the dose normally given to humans and then released their offspring into the competitive arena with an equal number of non-Paxil exposed mice of similar age.

“We don’t really have a sensitive, broad toxicity assessment system. That’s why these things slip through the cracks and we often don’t discover harmful effects until after 10 or 20 years of epidemiology studies using the public as the experimental guinea pigs,” said Professor Potts.

Males whose parents had been fed Paxil while in utero were about half as likely to control one of the desirable nesting sites. They also weighed less, were more likely to die, and produced 44 percent fewer offspring.

Females from Paxil treated parents showed no weight or mortality issues, but they produced half as many offspring as the control group.

“It’s unknown how Paxil causes birth defects and why Paxil has a stronger correlation with birth defects than other SSRIs. We think most of our results are driven by endocrine disruption,” said University of Utah biologist Shannon M. Gaukler.

Another study performed using this OPA setup fed mice 25 percent extra sugar. This is deemed safe by regulators for humans and is the equivalent to drinking 3 cans of soda per day. Female mice died at twice the normal rate and males were 25 percent less likely to hold a desirable territory and reproduce.

“We don’t really have a sensitive, broad toxicity assessment system. That’s why these things slip through the cracks and we often don’t discover harmful effects until after 10 or 20 years of epidemiology studies using the public as the experimental guinea pigs,” said Professor Potts.