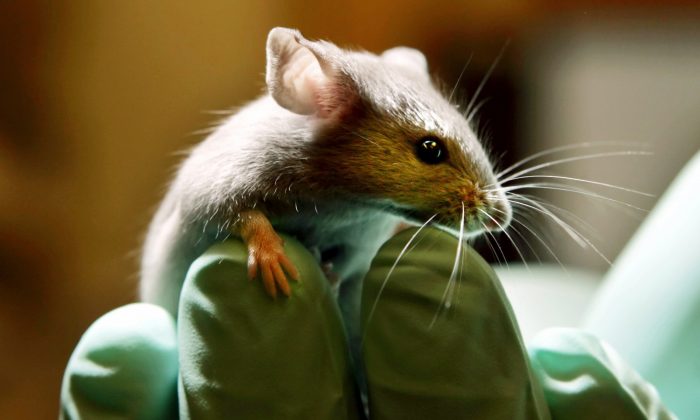 A laboratory mouse as it looks over the gloved hand of a technician at the Jackson Laboratory, in Bar Harbor, Maine, on Jan. 24, 2006. (AP Photo/Robert F. Bukaty)
Health News

Before a drug can be tested on humans, it has to be tested on animals. The drugs regulators demand it. Nobody—including researchers—likes testing on animals, which is why the race is on to find alternatives.

For this reason—as well as the fact that animal models are often unable to correctly predict how a drug will react in humans—scientists are actively considering alternatives. Fortunately, rapid progress is being made in a number of areas which may soon, hopefully, render animal testing obsolete.

One promising alternative to animal testing is computer models. This “in silico” technique simulates the workings of human biology to predict how a new drug will behave in the body, where it will end up—and even what side effects might occur.

This helps researchers refine drug structures before they are tested in animals. It can reduce the number of animals that are tested on by weeding out compounds that are overly toxic or not likely to be effective. Almost all pharmaceutical companies now routinely use computer models in drug development as the database of background knowledge of how drugs interact with biological systems has expanded significantly in recent years.

Another alternative to animal testing is “in vitro” testing. These are biological and chemical mimics that recreate particular parts of the body. They include mimics of the brain, heart, lungs and a variety of other body systems. Although these systems may look nothing like the original organ, they will consist of cells or molecules that have been made in the lab and behave in a similar way to those found in actual biological systems. For example, the surface of the skin can be recreated to measure how fast drugs get through and how much can be delivered by this route.

These in vitro studies have become so advanced that it’s now possible to predict how drugs will behave in almost any part of the body or any disease state. This has been achieved through an accumulation of knowledge about the science behind each disease, from how the body behaves in a healthy situation to how it changes when unwell and then how drugs can cure the disease.

Know Your Bugs—a Closer Look at Viruses, Bacteria, and Parasites

Using clinical data available for existing drugs allows scientists to compare real-life results with their mimics to prove their suitability before they are validated as a potential alternative.

Once the test system has been validated using known drugs, it can be used to analyze potential new drugs. Basically, once a new test method has proven effective it can begin the process of approval as a legal alternative for testing a specific property of a drug. In the EU these test methods are organized through EURL-ECVAM (the European Union Reference Laboratory for alternatives to animal testing), an organization based in northern Italy.

These alternatives to animal studies still need refining. Although they are used in some laboratories today, they can only help narrow down potential drug candidates or confirm results already obtained from animals. Unfortunately, at this time it is not possible to recreate all of the intricacies of the human body. The models we use are often overly simplified. This can sometimes make it hard to predict everything we need to know about a drug and we can miss out on noticing the more subtle biological interactions.

In some situations these simplified systems can work well, especially when ranking a series of potential drugs against each other, or looking for one particular interaction.

We are now in an incredibly exciting period of scientific progress. It is imaginable that all the information needed to understand how drugs behave can be determined without the need for animal testing. And it’s entirely plausible that in the next decade or two, animal testing will no longer be needed in the pharmaceutical industry.

Laura Waters is principal enterprise fellow at the University of Huddersfield in the U.K. This article was originally published on The Conversation.