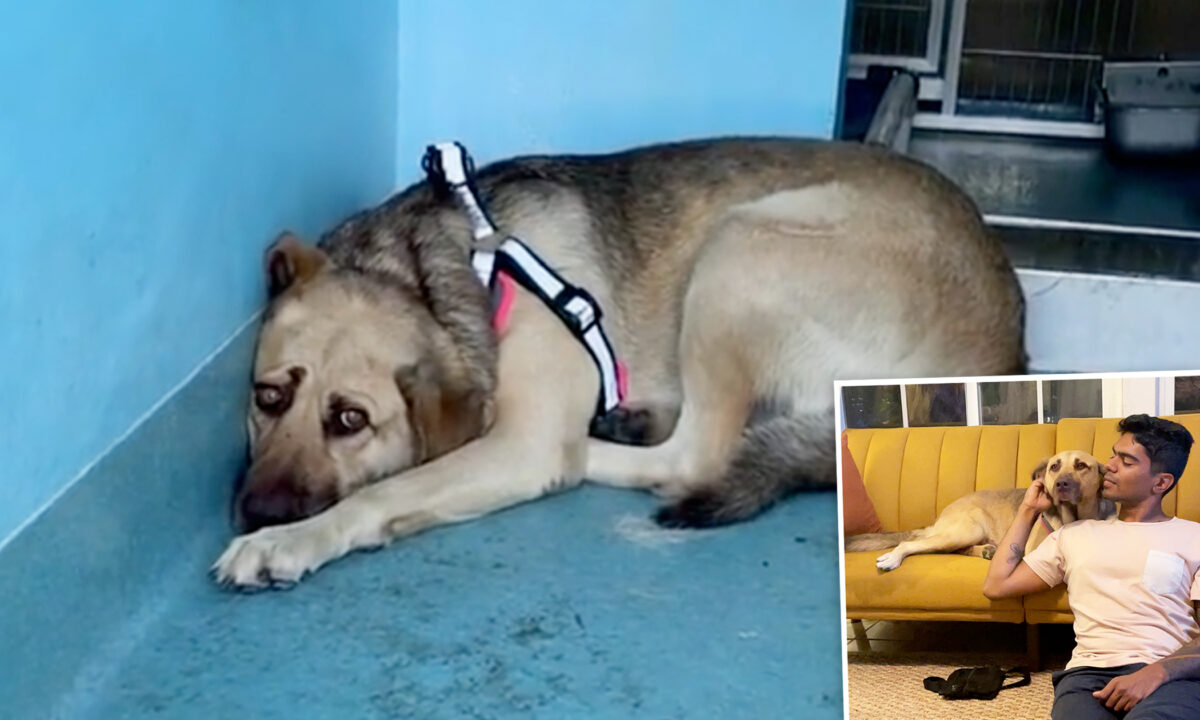 Terrified Dog Hides in the Corner of Shelter Until She’s Rescued, Forms the Most Special Bond With Owner

An overbred German shepherd mix who was dumped in a county shelter was so terrified, cowering in a corner. However, since being rescued, she has got a new lease on her life and now shares the most wonderful bond with her new owner.

When Shira Scott Astrof, the founder of The Animal Rescue Mission in Los Angeles, received a video of 3-year-old Chloe (who was unnamed at the time), her “heart stopped.”

“She was the most terrified dog I’d ever seen,” Shira told The Epoch Times. “She was dumped at the shelter on Sept. 15, 2021, and the workers believe it was her owners pretending to have found her on the street.”

At that time, Chloe had pups and was clearly overbred. Shira tried to get Chloe out desperately but was told she was too frightened to be assessed, and they couldn’t release her until she was assessed.

“It was absolutely cruel,” Shira said. “The longer she was stuck in a cold and scary shelter, the more shut down and scared she would become.”

Shira, who began her rescue mission four years ago, believes that county shelters are not a place a dog should end up in, as she has noticed that the longer they stay there, the more stressed they end up getting, and sadly, all county and city shelters are kill shelters. Shira also pointed out that dogs that are abandoned at a shelter are given a 50 percent chance of making it out alive.

However, 10 days later, Shira finally managed to go and get Chloe, who was a pitiful sight.

“She sat in the corner with her head facing the wall, shaking,” Shira said. “It was painfully obvious that she had just had babies and was confused, stressed, and heartbroken being dumped in a strange and loud place.”

But Shira’s arrival was the very beginning of a new chapter for the formerly neglected, mistreated dog. Through her contact with a partner rescue group, Shira had been introduced to 25-year-old Darvish, an Indian software engineer living in Los Angeles, who was looking to foster a dog.

“When I spoke to Darvish on the phone for the first time, I knew he was an incredible human and would definitely help me save a dog,” Shira said. “And when I saw Chloe at the shelter, I knew he would be the one to help her.”

Darvish had switched to a fully remote role and found himself having extra time on his hands. Thus he decided to make use of it by fostering a dog.

Recalling the first time he met Chloe—whom he later renamed Mira—Darvish said: “I felt really sorry for her, since she didn’t act like any other dog I’d seen before; she was terrified of people and didn’t want to leave her cage at all.”

The job of coaxing Chole into Darvish’s car was another challenge. Hence, Shira sat with her in the back, trying to comfort and calm her with treats and cuddles.

“She was so terrified at first, but by the end of the hour-long car ride, she had her head on my lap and was letting me snuggle her,” Shira said. “I even got a kiss.”

Once the trio arrived at Darvish’s house, it took over 30 minutes to persuade Chloe to get out of the car again. When she finally did enter the house, she was still extremely scared, lost, and confused.

“She curled up in a corner in my room and didn’t move from there for three whole days,” Darvish said. “She refused to eat or drink during this time.”

Darvish sat beside her and tried feeding her treats while giving her lots of space and time to settle down. Eventually, Chloe got comfortable eating treats out of his hand, and she would follow him around the room. Then one day, finally, she followed Darvish out to the front yard and ate a full meal.

“Each day, Darvish would win her trust more and more,” said Shira. “One particular day, I went to see her, and she was just mesmerized by him. She followed him everywhere and she loved him so much. Their bond was like nothing I had ever seen—so heartwarming and special.”

“I was and still am just so happy for this sweet girl,” she said. “She had been through so much and deserved this happy ending.”

Shira’s extraordinary work helping animals in need began when she was just 5 years old, rescuing a stray kitten she found outside her house while growing up in New York. She went on to volunteer at various rescues and shelters and moved to Los Angeles at the age of 17 to attend the University of Southern California (U.S.C.) to study theater.

Alongside her acting work—including various roles on TV shows and a handful of movies and commercials—Shira advocates and lobbies for improved animal cruelty laws in California.

Her organization primarily rescues dogs and often cats, but her compassion for animals extends to all species, such as pigs, squirrels, chickens, and birds from various shelters, and abuse situations.

Shira said they also have a shelter in Tijuana, Mexico, and they provide free spay and neutering events as well as resources for pet owners in need of assistance.

As for Chloe, the once petrified German shepherd mix is now enjoying life since getting a second chance.

“She’s very attached and follows me absolutely everywhere,” said Darvish. “She seems so much more relaxed now—she’s not constantly on edge looking for threats and actually acts like a normal dog, lounging around the house, pestering people for food and attention!”

Darvish has already had some memorable moments with Chloe, including her first time playing fetch where she seemed genuinely happy chasing the ball around, and the first time she warmed up to someone else other than him.

“I honestly didn’t think Mira would ever have a normal life given how scared she was when I got her,” Darvish said. “But her progress has been amazing, and gives me hope that no matter the state of the dog when you first rescue, you can give them a good life with patience and love (and lots of treats).”