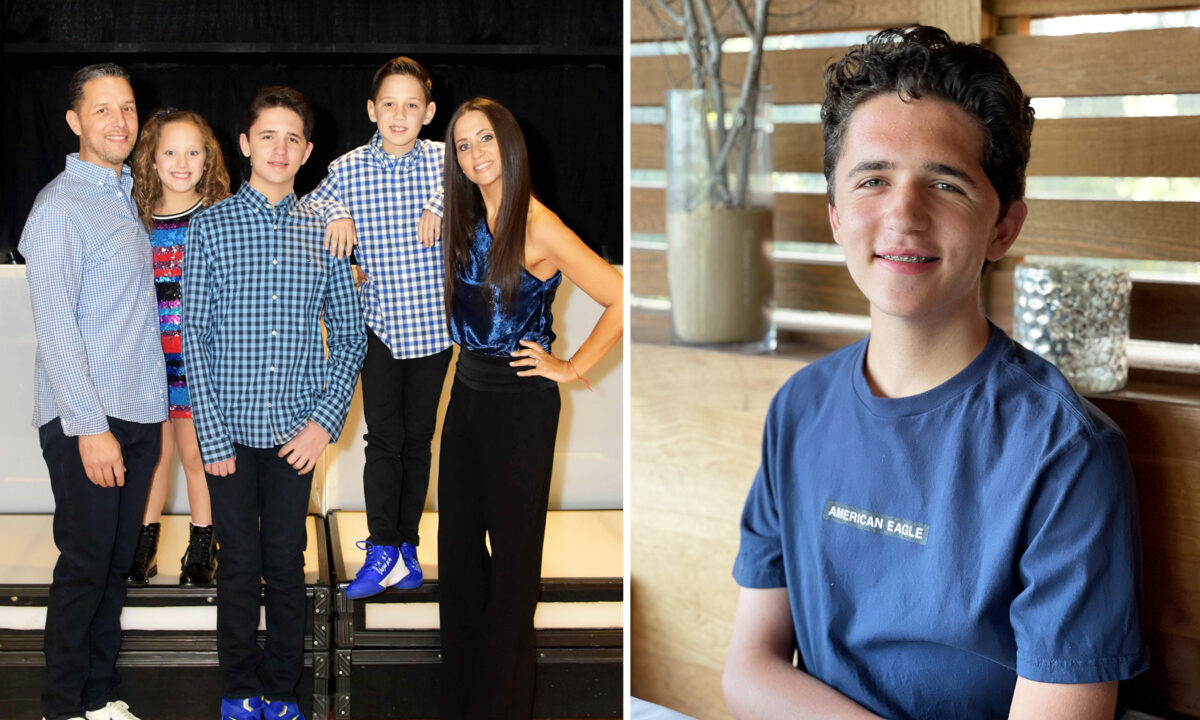 Teen Survived a Massive Stroke at Age 7, His Family Is Creating Awareness of the Signs

An inspiring New Jersey teen who survived a “massive” stroke at the age of 7 has slowly rebuilt his life to become a happy, healthy 15-year-old. He and his family have now become advocates, educating others on the signs of pediatric stroke in hopes of saving lives.

On May 19, 2014, Chase Schweiger had just returned from school and was getting ready to go to his karate class when he saw his friends playing outside and asked his mom if he could skip his class and join them instead, to which his mom agreed. A few moments later, an unexpected event occurred and changed his life.

“I heard one of the other little boys saying, ‘Chase, get up, get up.’ I turned around, and he was a few feet away from me,” Chase’s mom, 48-year-old Wendi Schweiger of Marlton, New Jersey, told The Epoch Times. “I remember seeing him laying on the ground.”

The mom of three walked up to him and recalls him staring at her. “His eyes were very wide … I actually thought he was kidding around for a minute, then I remember seeing drool coming out of the right side of his mouth,” she said.

A neighbor then lifted Chase from the ground and someone dialed 911. Paramedics suspected he was having a seizure and rushed him to the local hospital. At the hospital, Wendi noticed her son’s face “looked weird.” At this time, Chase was still unable to talk and just kept moaning. Shortly afterward, when Wendi’s husband, Jordan, arrived from Pittsburgh, he noticed that Chase wasn’t moving the right side of his body.

“Those were two telltale signs of a stroke,” said Wendi.

Chase was transferred to the Children’s Hospital of Philadelphia [CHOP], where an MRI confirmed he’d suffered a stroke.

“The acronym for stroke is FAST: face drooping, arm weakness, speech difficulty, and time [to act],” Wendi explained. “Chase had all of them … it’s just crazy because my husband and I were the ones that recognized.”

Chase’s parents’ shock and confusion quickly turned to panic. They worried whether Chase would pull through and whether he would ever talk or walk again.

They remained by his side as he was rushed into emergency surgery to remove a portion of his skull, to relieve the brain swelling that had occurred. It was a life-and-death decision, said Wendi.

Chase’s surgery went well, but his family still had no idea what his life would look like. Days later, Chase said his first word since the stroke in answer to a question from his nurse, giving his family hope.

“They did not give up on him,” said Wendi. “When Chase was in the pediatric intensive care unit, we remember them literally getting him out of bed, forcing him to do things, and then we’d see him being able to do these things … it was like one step in the right direction, and when we knew that he was able, we knew that there was hope.”

Determined Chase refused to use a cane or walker and instead used a gait belt, which his therapist would hold, to help him learn to walk again. He rebuilt his vocabulary using picture flashcards, moving from common nouns, such as “dog” and “house,” to photos of his own family.

During his five months at the hospital (three months as an inpatient and two months as an outpatient), Chase learned to walk, talk, and eat again. Wendi and Jordan made sure someone was with him 24 hours a day. The couple, who have two younger children—Mason, then 4, and Sloane, then 2—had invaluable support from family and friends.

The couple’s mothers had moved in to take care of the younger children; neighbors brought dinners. Touched by the massive support of their community during Chase’s recovery, Wendi and Jordan are quick to help others whenever they see a family in need to this day.

“I think it’s just important to always have faith and stay positive,” said Wendi. “If you need someone to lean on, you know, that’s important as well.”

“He had to have a couple of other brain surgeries,” said Wendi. “He turned out to be allergic to a medication and broke out in a rash … there were so many ups and downs in the hospital, but those ups were really what kept us going.”

Wendi said that, during this time, he essentially only missed a month and a half of school. “He went back to school in third grade and he was fine … our school systems have been fabulous with providing us any help that is needed,” she explained.

Now, eight years since his stroke, Chase is thriving. He still attends therapy, wears a brace on one leg to keep him from tripping, and has minimal use of his right hand and arm, but has regained his speech, his social life, and his love for school and sports.

Describing the hardworking high schooler as “a typical teenager” and “a very positive person,” Wendi said that her son has amazed his doctors by regaining his speech faculties. He sometimes suffers from aphasia and struggles to answer a question on the spot, but other times will “talk up a storm,” especially before bedtime.

The weakness on his right side prevents him from playing sports, but Chase is still a huge basketball and baseball fan with fierce loyalty to the Philadelphia Phillies and Philadelphia 76ers.

Wendi hopes Chase’s upward streak is here to stay. “One thing I always want to say to him is just never give up,” she said. “Keep fighting, keep doing what you do, keep having this positive attitude, and listen to your parents!”

Since Chase’s journey through the pediatric stroke, his family rallies to help others understand the little-known condition. At Chase’s one-year stroke anniversary, they invited everyone at his elementary school to wear purple ribbons and shared Chase’s story with newspaper and television outlets.

“They’re the people that arrive to houses first and can diagnose people,” said Wendi. “We taught them the symptoms of strokes, we taught them what to look for, and most importantly, we told them that kids can have strokes; don’t just rule it out to elderly people.”

Wendi firmly believes that parents are a child’s best advocate; by staying informed and presenting a united front, anything is possible.

She also stresses that her goal is to make it known that it doesn’t matter where you live, anyone can have a stroke, kids included.

“Unfortunately, the outcome is very different for every single kid,” she reflected, “… but you just have to keep fighting and get the word out there that kids can have strokes, too. That is mine and my husband’s mission, to make it known to everybody … not just everyone in the medical field, but everybody, because if somebody knows, somebody can help save a life.”

Watch a video of Chase working out: