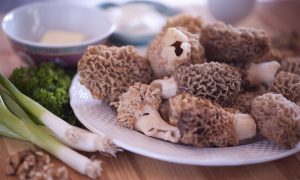 Tales of Morels and Other Wild Edibles

The mushroom season starts later in summer, but according to wild food forager Nathaniel Whitmore, the famous morel mushroom comes out earlier in spring when it is also a good time to pick wild edible vegetables such as roots and young greens.

Whitmore is a herbalist and shiatsu therapist, as well as a self-published author on ethno-botany. He is also a tireless educator who regularly conducts classes and walks on wild edibles.

I joined him on a walk last Saturday alongside a group of about 10 eager mushroom hunters—all of us excited at the prospect of walking in the fresh air, learning about and possibly even tasting our wild finds.

We set off from his Glen Spey property, in Sullivan County, just across the border from Orange County.

Someone who had met Whitmore some time ago commented that he seems to look younger now. He smiled shyly and knowingly. He is visibly a living testament to the philosophy that wild foods are more nutrient-rich, thus imparting great health. His active outdoor lifestyle doesn’t hurt either.

“My claim is that this time of the year I used to eat wild foods every day,” he said. But having recently relocated to Glen Spey he is still finding his gastronomic bearings. Some of his favorite wild plants are mustard plant, burdock roots, bracken, and edible fiddleheads.

Far from being sedentary, he is fully engaged in his environment on a daily basis. He is either gathering plants in the forest, giving private herbal consultations, sleeping in a tent when guests occupy the main house, or single-handedly working on his log cabin that is almost completed.

Unsurprisingly, like many people who live close to the land, and also holistic medicine practitioners, Whitmore believes that the best medicine is preventive. This is something that we have forgotten due to our busy modern lifestyles which force us to reach for what is quick, convenient, and woefully lacking in nutritional value.

He also mentions that the stagnation we experience in our bodies and our lives is due in part to a stagnant diet, so it is important to eat a variety of fresh natural foods.

“As a wild foods enthusiast and quasi-vegetarian, I delight in variety. I derive almost all of my nutrition from plant sources, and I believe that my success in doing so is largely due to variety. There are so many forms of plant life found in nature that can be eaten, including grains, beans, nuts, seeds, buds, flowers, leaves, stalks, shoots, roots, tubers, fruits, berries, seaweeds, fiddleheads, pollen, etc.,” Whitmore writes on his website. “The various tastes, qualities, and energies found in a diet of diversity make for great health.”

First Encounter With a Reishi

As we set out, we first looked around Whitmore’s land where we came across some glorious reishi mushrooms growing on a hemlock tree.

He patiently explained to those who were largely ignorant about the characteristics of the reishi that it is “the most revered of medicinals.” It has a strong and bitter taste, so it is used dried and boiled either in soups or tea. The reishi is known as the longevity mushroom and used as an overall body-mind tonic.

We then changed scenery and went for a longer walk along the river where he was excited to see dead elm trees. Not because the trees were dead per se, but because we were after all on the hunt for morels, and morels love dead elm trees. Apparently, the nutrients of a dying elm with all their sugary goodness are soaked up by the mushrooms that thrive under those conditions.

Morels can also be found in apple orchards but he cautioned against picking morels that grow there because they soak up heavy metals and, on older apple orchards, where arsenic was used as an insecticide, the mushrooms are themselves toxic due to their arsenic content.

In commercially grown apples the arsenic accumulates in apple seeds but not the rest of the apple. Even organically grown apple seeds naturally have cyanide—eating apple seeds is beneficial for the lungs in small doses, but they are not indicated to be eaten in large amounts according to Whitmore.

As we walked, Whitmore was clearly the most agile among us, but his agility was not all. He seemed to be the most alert and sharp in terms of using his every sense to survey the land. He pointed out a few interesting plants and where to look for morels.

“When you spend time in the forest and consume foods from the wild, you are taking nutrition and vital energy directly from the source. There is something very powerful about this.”
— Nathaniel Whitmore, wild foods forager

The garlic mustard (alliaria petiolata), which has become an invasive species in North America, was used in Europe to flavor food and brought to America by early settlers for that purpose. We crushed it between our fingers and noticed its distinctive garlicky/oniony aroma.

We also came across the sinister-sounding white snakeroot (ageratina altissima) a poisonous perennial said to have killed Abraham Lincoln’s mother. The story goes that she died due to drinking the milk from poisoned cows that ate the plant. She wasn’t the only one killed. According to the Library of Illinois website (www.library.illinois.edu) so called “milk sickness” claimed thousands of lives in the early 1800s.

Of all the plants that people who are inflicted with poison ivy should get to know, jewelweed is singularly the most effective antidote to the irritating urushiol compound in the poison ivy, if used the right way. Whitmore demonstrated its use by crushing the stem and rubbing it on his calves. Interestingly, jewelweed and poison ivy tend to grow in the vicinity of each other.

We also found St. John’s wort, used as an anti-depressant, and someone in the group found a black woody growth on a tree which Whitmore took back to try to identify further.

We didn’t find morels so we had to make do with an animated description of their taste and texture which, given that we were hungry for more than knowledge by that point, sounded delicious. Whitmore said that they taste similar to the “gristle on steak” or “just like bread and butter.”

For mushroom connoisseurs, it seems that once you taste a morel, you’re hooked. Even so, they are not as popular here as they are in Europe, where they are shipped in large quantities as a gourmet food. In the U.S. they can be purchased for $30/lb. fresh and up to $300/lb. dried.

Despite the fact that we didn’t find morels, we were in high spirits and armed with great new knowledge. Whitmore teaches by example and his knowledge and enthusiasm in sharing it made it a great experience and a steppingstone for further exploration.

There are many secrets that the forest is wanting to impart to us, and Whitmore luckily is still willing to listen. Ultimately, his aim is to inspire more of us to reconnect with the land that we inhabit and change our perspective that fuels modern agricultural practices that are proving to be less and less sustainable. Another important benefit of foraging for wild foods such as mushrooms is that “hunting for them requires walking—one of the healthiest habits there is,” he writes on his website.

Surrounded by the energy of the forest, plants and creatures, the wind and the sun, and then partaking in their goodness is something that doesn’t merely feed us, it also realigns us inside out.

“When you spend time in the forest and consume foods from the wild, you are taking nutrition and vital energy directly from the source. There is something very powerful about this,” Whitmore wrote in the article on his website “The Chi of the Forest.”