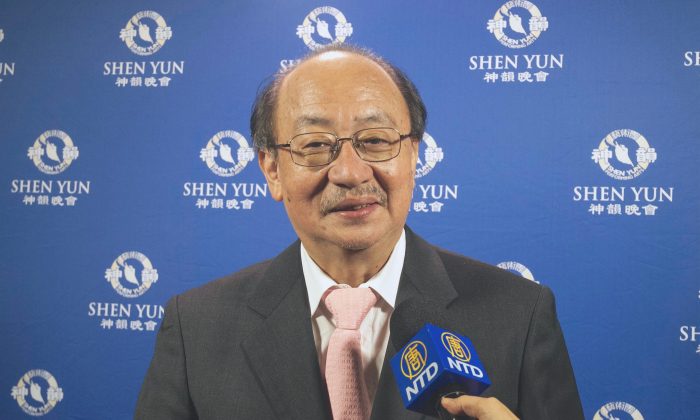 HSINCHU, Taiwan—At first glance, Shen Yun Symphony Orchestra is already one of a kind when it brings together two very different musical traditions. And when it brings a slight touch of local culture to the stage, it is clear that Taiwanese audiences will resonate deeply to it.

“Such a wonderful performance is few and far between. I believe all the audience members here today would have the same feeling I do,” said Legislator Ker Chien-ming, who was referring to the piece “Green Mountain.” He was in attendance for the matinee at the Hsinchu Culture Bureau Performance Hall on Sept. 19.

“Green Mountain,” with a history dating back to 1947, brings to light the people living at Alishan, the mountainous region in southern Taiwan and their “eternal connection with rivers and mountains,” according to Shen Yun’s program guide. The song has since become iconic of Taiwanese culture.

The symphony orchestra is part of Shen Yun Performing Arts, which was founded in 2006 with a mission to rejuvenate the divinely inspired traditional Chinese culture through music and dance. The traditional culture, though much lost in modern-day China, has been well preserved in Taiwan.

“I was really moved. I was blown away and truly touched,” said Mr. Ker. “In particular, the blending of Eastern and Western musical instruments was magnificent.”

Such blending, according to Shen Yun’s website, has enablde the symphony orchestra to create a new frontier in classical music. One example is how three soloists playing erhus, Chinese two-stringed violin capable of depicting human voices, led the Western orchestra in one piece.

Mr. Ker said he was able to sense both powerful momentum and tender moments from the music, which he attributed to how the musicians had mastered their skills.

“This performance is not simply enjoyable, but it is a magnificent music feast,” the legislator said.

Mr. Ker, a lifelong politician and the caucus whip of the ruling Democratic Progressive Party, suggested that other Taiwanese politicians should see the performance themselves.

“Politicians should lift the loads off their shoulders by listening to music, especially music by Shen Yun Symphony Orchestra,” he said emphatically.