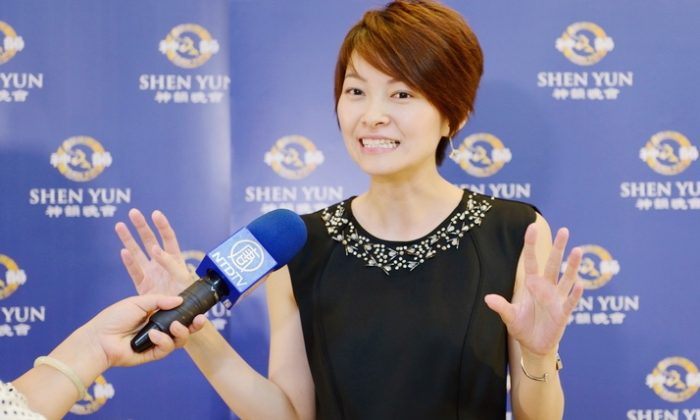 Taiwanese artists, following the teachings of ancient Chinese culture, work to improve their temperament and character, in addition to mastering the skills and techniques of their art. Many artists came to see Shen Yun perform in Taiwan.

Ms. Li spoke of the dance The Power of Compassion.

“Even if your enemy attacks you nonstop, you must respond with compassion. I think this is hard. However, we must be able to overcome this difficulty in order to elevate and become a better person,” said Ms. Li.

A New Era of East and West

At the heart of a Shen Yun performance is classical Chinese dance, accompanied by a live orchestra that blends two of the world’s great classical music traditions—East and West, according to its website. Shen Yun also includes ethnic and folk dances, original handmade costumes, and an interactive projected backdrop.

“Shen Yun is leading towards a new era, one that is more encompassing and inclusive,” said Mr. Yu, and added that anyone who understands such new era would be able to learn something new and apply it to their own art.

This idea was clear in three dances, Chopsticks Dance of the Mongolian Ladies, Snow-Capped Celebration and In A Village of The Hmong, according to Mr. Yu.

“Ancient Chinese culture can assimilate cultures from other ethnic groups, which shows refined spiritual aspects that are unique only to the ancient culture,” said Mr. Yu.

Snow-Capped Celebration is a Tibetan ethnic dance set in the pristine snow-capped Himalayas. The Hmong, one of the sub-groups of the Miao, are an ethnic group from southern China, Vietnam, Laos and Thailand.

United With the Dancers

“After watching all these different pieces, I feel I don’t have any regrets in life anymore. I am so deeply touched,” said Chen Hsinyuin, a pianist who earned a Master’s Degree in music from University of California, Berkeley.

Shen Yun’s website says, “Classical Chinese dance is a culture left to us by the ancients who came before us. Its beauty should be riches shared by all of humanity.”

“I feel like I have gone to heaven. At one moment during the performance, I felt I had united with the dancers,” said Ms. Chen.
Reporting by Chen Zhida and Frank Fang