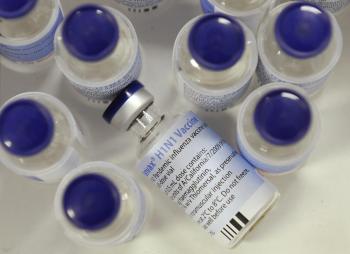 Thiomersal, also known as thimerosal, is a mercury compound that is one of the safety concerns about the swine flu and other vaccines. (William West/AFP/Getty Images)
Mind & Body

By Ronald D. Whitmont
Print
Epidemiologists and public health experts have been watching the gradual domestication of the influenza virus. Over time, it has consistently and incrementally trended toward reduced virulence and aggressiveness.

There continue to be small spikes of intermittent increased mortality when strains suddenly mutate, or genetic drift introduces new viral strains, but the overall trend continues toward less and less lethal outbreaks of these viruses.

This downward trend in lethal activity is consistent with the domestication process of most organisms known to man. This process takes place over time as animal, viral, bacterial, and fungal species gradually accommodate to mankind and vice versa.

This pattern occasionally reverses itself, triggered by a number of diverse factors, including mankind’s use of modern chemical agents (antibiotics, antiviral, and antifungal agents), forcing these microorganisms to act more aggressively.

When drugs are used to combat these organisms, they must exhibit more aggressive and virulent tendencies or perish. Ultimately, after the continued application of these drugs, many organisms emerge with drug resistance and improved survival advantages.

This phenomenon is observable in all bacterial, viral, and fungal species. Well-known examples include methicillin-resistant Staphylococcus aureus (MRSA) and multidrug resistant tuberculosis (MTB). These examples are by no means exceptions to the rule— they are the rule.

But left to the processes of natural selection, the virulence and aggressiveness of these organisms inevitably trends downward over time as they accommodate themselves to human infection. This behavior seems to be true for the H1N1 flu virus as well.

Of course, the CDC and the pharmaceutical industries claim credit for this reduction in death rate, but statistical analysis shows that this trend predated the introduction of the vaccine and is not correlated with either vaccine or antiviral medication use.

New Zealand recently reported that their winter experience with H1N1 was particularly mild, with a death rate of 0.5 percent and a total of only 3,179 cases nationwide. [3]

The U.S. government, backed by the pharmaceutical industry and other health organizations, has launched a vigorous campaign to immunize the country.

In New York State, Commissioner of Health Richard Daines has issued an order requiring all health care workers to become immunized for the seasonal flu and H1N1 before Nov. 30, 2009, or face termination. This order is unprecedented. Furthermore it isn’t even justified by scientific evidence of either exceptional viral risk or reliable vaccine safety.

Neither the worldwide observation of low risk associated with H1N1 nor the track record of influenza vaccines in the past justifies these actions. The current H1N1 vaccine poses even greater risk to personal health since its testing and safety data have been kept secret. [4]

Additionally, analysis of data from prior influenza outbreaks reveals that immunization is totally ineffective in children younger than 2 years and that it has no effect on either hospitalization or death rates in adults.

In addition, vaccines have a longstanding history of safety problems, which include biological contamination, metal preservatives, and adjuvant toxicity. These pharmaceuticals have been associated with numerous reports of neurological and autoimmune side effects.

Safety boards reviewing and recommending these products are staffed by industry-influenced individuals. Vaccine manufacturers are safely protected from product liability while the public is mandated to receive treatment.

Dr. Whitmont is a classical homeopathic physician practicing in Rhinebeck, N.Y., and New York City. His Web site is Homeopathicmd.com