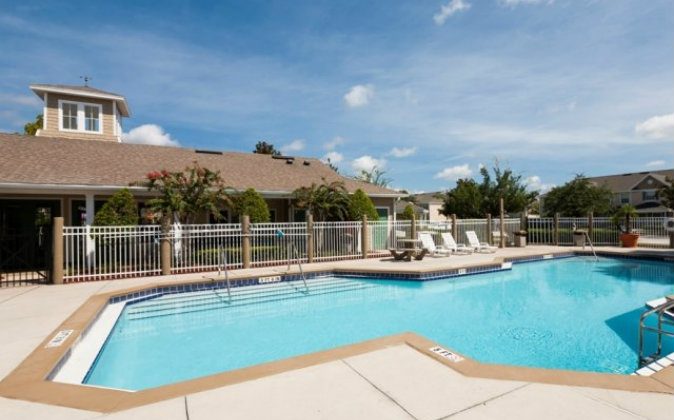 The Clubhouse pool, picture above, is one of the two pools at the gated community. (Courtesy of Waterford East Apartments)
Health News

Five children in Orlando, Florida, fell ill after swimming in a pool that contained an unsafe amount of chlorine.

The incident occurred at an apartment complex on March 15 and resulted in one child being hospitalized at Florida Hospital East; the current condition of the juvenile is unknown.

Five children were found vomiting and coughing after swimming in the pool.

According to an Orange County Fire-Rescue employee, a water quality test performed by emergency responders revealed that the pool the children were swimming in contained “double the safe level” of chlorine.

Kat Kennedy, a spokesperson for the Fire-Rescue, said the five children—who are all between the ages of 4 and 11 years old—were found vomiting and coughing after swimming in the pool.

According to the US National Library of Medicine, chlorine is used to prevent bacterial growth. Symptoms of chlorine poisoning, amongst others, can include “vomiting,” “severe pain in throat,” “throat swelling,” and “breathing difficulty.”

The hyper-chlorinated pool is located at Waterford East Apartments, “just minutes from the Orlando International Airport and University of Central Florida,” according to the apartment complex’s website.

Waterford East Apartments boasts of being a gated community, with “two sparkling pools,” a 24-hour gym, a sand volleyball court, and an after-school program. It is unclear in which pool the children were swimming, for how long, or under whose supervision.

Waterford East Apartments were not immediately available for comment.