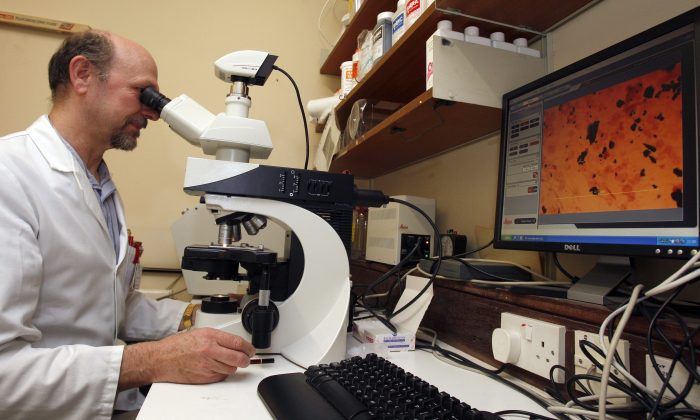 Biomedical scientist Richard Barnard examines slides showing Staph bacteria at the Queen Elizabeth Hospital in King’s Lynn, England, Oct. 12, 2009. Antimicrobial-resistant infections or “superbugs” are on the rise worldwide, but Canada may be ill-prepared to deal with the issue, an expert says. (AP Photo/Kirsty Wigglesworth)
Canada

Antimicrobial-resistant infections or “superbugs” will kill more people than cancer worldwide by 2050, a recent report estimates, but Canada may be ill-prepared to deal with the issue, an expert says.

The report, titled “Tackling a Global Health Crisis: Initial Steps,” reflects warnings from experts and bodies like the World Health Organization and the Public Health Agency of Canada (PHAC), calling superbugs one of the greatest global health risks.

In addition to lives lost, superbugs will cost about C$100 trillion in healthcare costs globally unless countries take concerted action.

Despite the warnings, Canada’s auditor general noted in his 2015 spring report that PHAC and Health Canada have yet to act on key responsibilities to counter the risks.

In Canada we spend so much money on treating diseases and we spend far less money on preventing them.
— Infectious diseases expert Steven Hoffman

“In Canada we spend so much money on treating diseases and we spend far less money on preventing them,” says health policy and infectious diseases expert Steven Hoffman.

Hoffman believes that if last year’s Ebola outbreak in West Africa had happened in Canada, our relatively strong health care system would have been able to control the spread of the infection and only a few people would have been affected.

But when it comes to superbugs, we are not ready, he says, adding that one of the problems is the lack information on the use of antimicrobials.

“The misuse and abuse of these drugs is so high that to have a proper public policy response we need antimicrobial usage information,” he says.

“It’s shocking that we don’t have basic information when the misuse and abuse of antimicrobials is so high.”

More than 18,000 Canadians contract superbugs in hospitals each year, according to a 2014 PHAC report. Superbugs include bacteria, fungi, viruses, and parasites that became resistant to antimicrobials, like antibiotics and antivirals, which were once effective at killing infections.

While resistance occurs naturally, it happens more quickly if the antimicrobials are used for the wrong infection, at the wrong dosage, or for less time than prescribed.

“Ten years ago you could get a shot for gonorrhoea, and now a rising number of cases are resistant to existing antibiotics,” says Hoffman.

One of the initiatives experts propose is the development of surveillance systems that monitor anti-microbial resistance and usage in humans and animals.

The first CARSS report, published in March, revealed a number of weaknesses, however, such as its limited data on drug-resistant infections in clinics, long-term care facilities, and in remote regions—leaving important data gaps.

To address the system’s flaws, the auditor general suggested that PHAC collaborate with provincial and territorial authorities to gather enough data.

PHAC agreed and is currently developing a strategy to address CARSS’ weaknesses. But as they need to collaborate with multiple stakeholders across agencies, provinces, territories, and professional associations, a revised strategy might take some time.

MRSA, one of the most common superbugs in Canadian hospitals, saw an eight-fold increase in infection rates between 1995 and 2012, according to the PHAC report. This staph infection is resistant to the antibiotic methicillin and can cause bloodstream infections, pneumonia, and death if untreated.

Because superbugs are harder to treat, infected patients usually remain hospitalized longer and need more intensive care, leading to higher health-care costs. And with increasing resistance rates, infections that were once treatable can kill.

“It will affect my mom when she needs a hip replacement and is no longer able to get that surgery because suddenly a regular surgery is a life-or-death risk,” Hoffman says.

A 2010 study found that public health efforts to control infectious diseases is the biggest factor that will affect how many people become infected. The study, “Global Drivers of Human Pathogen Richness and Prevalence,” looked at what causes new infections to emerge and what helps them spread.

Another study published in 2014 mirrored these findings when it revealed that because public health efforts are becoming better at controlling infectious diseases globally, the amount of people infected decreased since 1980—despite a significant increase in the number of outbreaks and infectious diseases during the same period.

According to Stephane Michaud, Ebola task force chair at the Canadian Red Cross, knowing that Ebola might strike may have helped Nigeria and Mali respond faster and more successfully to the 2014 outbreak than countries like Guinea, which were caught by surprise.

Ebola was usually seen in the Democratic Republic of the Congo, which lies almost 4,000 kilometres away from Guinea. So when doctors treated a patient who turned out to have Ebola, they tested for malaria and other diseases usually found in Guinea. By the time they realized it was Ebola, the infection was already spreading.

MRSA, one of the most common superbugs in Canadian hospitals, saw an eight-fold increase in infection rates between 1995 and 2012.

While other factors, like geography and the quality of healthcare systems, may have helped keep the death toll in Nigeria and Mali low, Michaud believes “the significant difference is that by the time cases went to Nigeria and Mali, people knew that it was Ebola and knew how quickly it had to be resolved.”

The World Health Organization does not have a mandate to respond to outbreaks. Rather, it assists governments in detecting epidemics and coordinating their response.

Michaud identifies this as a major weakness in not being able to quickly respond to global outbreaks like Ebola—increasing the likelihood that outbreaks will spread globally.

Because the response to Ebola was so slow, the disease spread from Guinea to nine countries, including the United States and the United Kingdom.

Hoffman and Michaud will share their expertise on infectious diseases at a presentation in Ottawa on June 25 titled “Global Bio-risks: Ebola, Emerging Infectious Diseases, and Bio-Terrorism.” They will be joined by Jez Littlewood, a Carleton University professor and expert on biological weapons.

The event will take place at 7 p.m. at the Colonel By Room, Ottawa City Hall, and will be hosted by the National Capital Region Branch of the UN Association in Canada (UNA-NCRB). For more information, visit: http://tiny.cc/e82fzx

Angelica Meira Costa is an Ottawa-based writer with an interest in public health and global affairs.