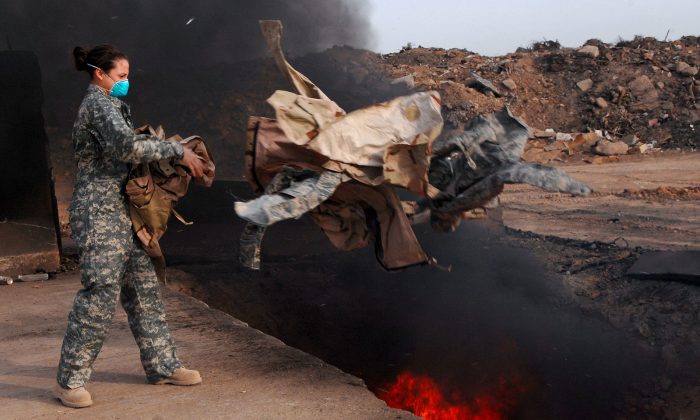 An alternative method of analyzing lung CT scans may offer a better way to explain and diagnose lung damage in military personnel, according to a new study.

Parametric Response Mapping (PRM), a form of computational analysis of images in high-resolution CT (HRCT) scans, was found to be effective in identifying and quantifying lung inflammation in military veterans, even when traditional lung capacity tests returned normal readings.

Using PRM, researchers from the University of Michigan showed that veterans diagnosed with constrictive bronchiolitis—inflammation of the small airways, often caused by smoking, air pollution, or work environment—had disease progression comparable to patients with mild to moderate chronic obstructive pulmonary disease (COPD). The findings were detailed in a report published in May, in the American Journal of Respiratory and Critical Care Medicine.

The authors believe the new method of lung diagnosis may help uncover causes behind prevalent lung impairments in veterans returning from deployment.

“The stories I’ve heard are all the same. You have people who were otherwise healthy who went into the military and who have come home and are saying ‘I feel old, I’m exhausted when I’m trying to run, I can’t catch my breath,’” said Rachel Howard, a researcher of the University of Michigan, in the university’s media release.

However, since lung capacity tests often return with normal readings, it becomes difficult to diagnose the problem. While a lung biopsy offers a definitive diagnosis, doctors may hesitate to recommend a biopsy because of its invasive nature.

“You have this catch-22 where their energy and their exercise ability has decreased due to these unexplained issues. As they stop exercising, they start gaining weight and become deconditioned and finally end up at the doctor, who says ‘your BMI (body mass index) is 38 so of course you are out of breath.’”

Researchers observed that veterans with constrictive bronchiolitis had higher BMI levels than either smokers or people with normal lung health.

Researchers are suspicious that exposure to sandstorms, toxic fumes in burn pits, and other chemicals are the causes behind complaints of shortness in breath in veterans returning from the Gulf War and conflicts in Iraq and Afghanistan.

Toxins in the fumes may affect the skin, eyes, lungs, cardiovascular, gastrointestinal, and other internal organs. The United States Department of Veterans Affairs states (pdf) that most irritation is temporary and resolves once exposure is gone, but some health organizations caution of potential long-term effects.

The use of burn pits was a common waste disposal practice in Iraq and Afghanistan. Since 2010, Congress has banned the use of burn pits, except when there are “no feasible alternatives,” according to a United States Department of Defense (DoD) report (pdf) to Congress in April 2019. The report stated that at least nine burn pits were still in operation in March 2019.

According to the DoD report, factors that influenced the continued use of burn pits were short-term contingency locations, “infrastructure gaps and limited contract disposal capabilities” in places like Iraq and Afghanistan. The report advised further resource investments to “fund, operate and maintain long-term solutions.”