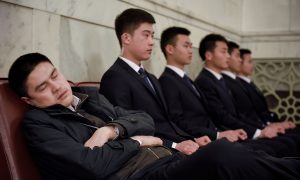 Study: Sleeping in a New Place Keeps Half the Brain on Alert (Video)

Researchers now have a better understanding of why sleeping in a different place often makes people feel groggy afterwards.

According to a study published in May, it’s likely because one hemisphere of the brain acts as a “night watch to monitor unfamiliar surroundings during sleep.” The general phenomenon, called the “first night effect,” has long been known to scientists who observed the abnormal brain pattern in participants of sleep experiments.

In order to determine why this happens, researchers at Brown University analyzed the brains of 35 people during two nights of sleep which were a week apart. The team found that one of the hemispheres–the left side for most people–tended to show a much higher level of activity than the other despite still being somewhat asleep.  This more alert half even detected external stimuli like a beeping sound which, according to the study, “caused more arousals and faster behavioral responses….” The paper then goes on to note that “None of these asymmetries were evident during subsequent sleep sessions.”

Despite their findings, the researchers still don’t know why just one hemisphere remains alert nor if the sides switch roles at some point.