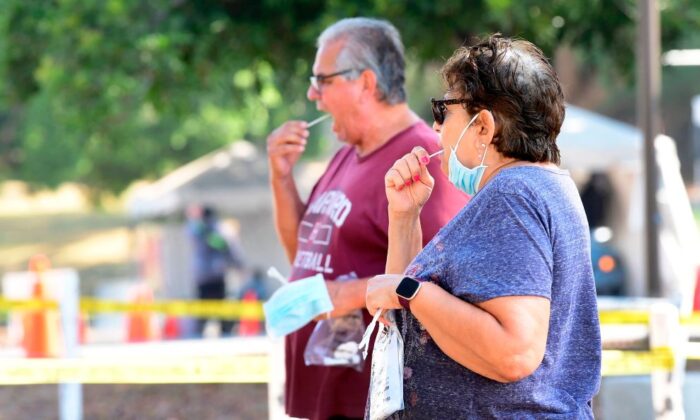 The most recent study from China on the prevalence of infection after a lockdown found no transmission of the CCP virus among people who were in close contact with asymptomatic patients, contradicting the current narrative that asymptomatic transmission plays a major role in the pandemic.

An asymptomatic carrier is someone who has not displayed symptoms after being infected, but may spread the virus to others. This is different from someone who is presymptomatic, meaning the person doesn’t feel or look sick, but eventually shows symptoms later, and does transmit the virus during that presymptomatic phase.

Samples of all the asymptomatic cases were also cultured in the lab and “no viable virus” was found, meaning it cannot transmit a virus. The authors also found that 190 of the 300 asymptomatic samples tested positive for antibodies (IgG and/or IgM), indicating a possible recent COVID-19 infection or the PCR test resulted in a false positive.

The scientists identified and followed 1,174 close contacts of the asymptomatic cases and found that none of the contacts tested positive for COVID-19. They noted, “Compared with symptomatic patients, asymptomatic infected persons generally have low quantity of viral loads and a short duration of viral shedding, which decrease the transmission risk of SARS-CoV-2.”

“This study confirms what physicians have known and non-scientists have suspected for millennia: namely, that asymptomatic transmission has never been the primary cause of outbreaks,” Dr. Simone Gold, MD, and founder of America’s Frontline Doctors told The Epoch Times in an email.

The Infectious Diseases Society of America’s most updated guidance on diagnosing, treating, and managing outbreaks during flu season recommends only people with symptoms get tested for influenza.

Sweden, which has not resorted to lockdowns, universal testing of its citizens, or mandated mask-wearing since the pandemic began, doesn’t believe that asymptomatic spread is common. “Based on the experience of COVID-19 and other similar diseases, the assessment is that the spread of infection from people without symptoms accounts for a small proportion,” according to the Swedish Public Health Agency.

To avoid infection, Swedes are encouraged to not touch their face, physically distance in public places, practice hand hygiene, sneeze or cough into the arm fold, and stay home when feeling sick.

There is evidence that indicates asymptomatic spread is not as prevalent as earlier studies claimed it to be, as high as 81 percent, and that the risk of transmission from asymptomatic patients is low.

In a different meta-analysis study published online on October 9, researchers found that their “estimates of the prevalence of asymptomatic COVID-19 cases and asymptomatic transmission rates are lower than many highly publicized studies.”

Several highly publicized studies like the Diamond Princess cruise ship, the Iceland study, and the homeless shelter in Boston, cited by many governments and public health officials to justify some of their policies were excluded from this study for their lack of follow-up on the patients to determine if they were truly asymptomatic or presymptomatic.

The first report to suggest asymptomatic spread outside China was also excluded. The report made national headlines before it was found to be flawed. The authors relied only on the accounts of the four German patients without speaking to the “asymptomatic” businesswoman from Shanghai, who had developed symptoms while in Germany.

The authors addressed the mistake by submitting a supplementary appendix (pdf) attached to the bottom of the paper, instead of making a correction to the paper itself.

Several countries are universally testing and masking healthy people as an effort to mitigate asymptomatic spread, despite inconclusive evidence to support asymptomatic infections being a driver of the pandemic.

The Center for Disease Control and Prevention (CDC) in its updated guidance for why cloth masks should be worn in the community claim there is a 50 percent transmission rate of asymptomatic people, without differentiating between asymptomatic and presymptomatic individuals.

“Masks are primarily intended to reduce the emission of virus-laden droplets (“source control”), which is especially relevant for asymptomatic or presymptomatic infected wearers … who are estimated to account for more than 50 [percent] of transmissions.”

Universities across the United States, Canada, and the UK have propped up makeshift testing sites to test students and staff, while Washington Mayor Muriel Bowser has implemented an asymptomatic testing protocol for students and staff participating in the state’s public schools in-person learning program.

“We are proud of the very robust testing system we have built in [the District of Columbia], and now we can use that infrastructure to support this program,” Bowser said in a press release on Dec. 2.

Students whose parent or guardian have signed a consent form will be able to receive a “PCR nasal-swab test” about every 10 days at school, while staff is offered a mailed testing kit once a week, all at no cost.