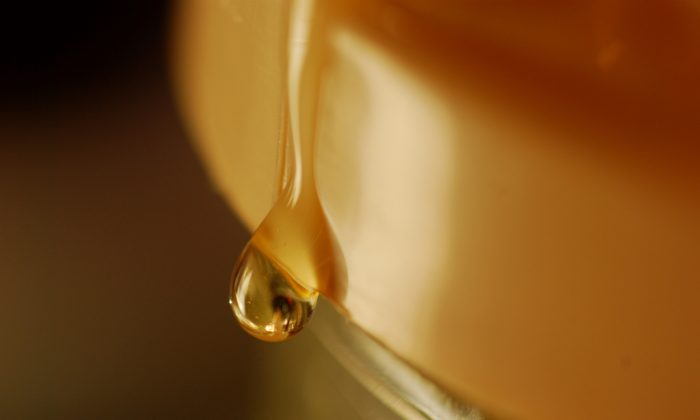 Two issues could be causing the contamination of organic honey. First, a single honey bee will travel six miles to find nectar so it’s nearly impossible to avoid all pesticides. Additionally, beekeepers use pesticides to control Varroa mites in beehives. The mites are a parasite that attacks honeybees and can cause disease. When organic beekeepers buy commercially available wax for their hives, it could be contaminated with pesticides. Even though organic beekeepers can’t directly treat their beehives with pesticides.

According to Scientific American:

To survive a year, a single colony brings in about 250 pounds of nectar- an astounding weight for a small insect. It’s not as though individual flowers are generous with nectar, either. Most yield just the smallest of droplets. A standard jar of honey from the supermarket requires bees to make a million flower visits.

The widespread use of pesticides like Roundup makes it’s even more likely that glyphosate will make its way into honey. It should be noted that countries where GM crops were permitted had higher levels of glyphosate in their honey.

Organic honey isn’t impossible. It’s just beyond of the ability of most beekeepers. Bee yards situated in isolated spots deep in the Adirondacks, or mountain valleys in sparsely-populated New Mexico, can probably pull off honey free of agrochemicals. Most beekeepers operate within a bee’s flight of pesticides, however, making “organic” honey an illusory proposition.

Are You Sensitive to Gluten, or Just Roundup? American Wheat Often Doused With Toxic Herbicide Before Harvest

Because of this, it’s hard for honey to avoid traces of pesticides. But organic honey still contains less pesticides than conventional honey, so it’s worth the purchase.