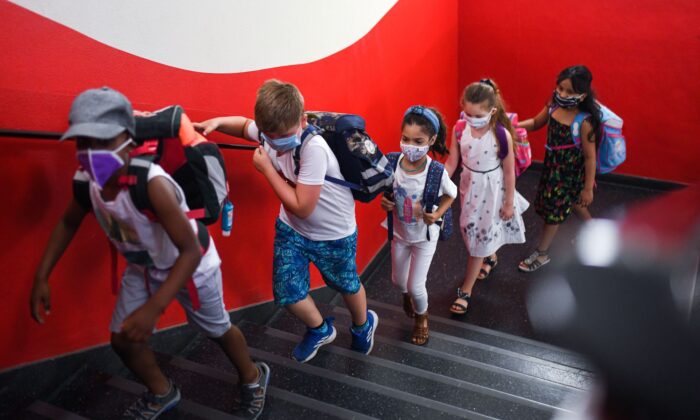 Infection with the CCP virus does not impact lung function in children and young adults, according to two separate studies presented at the European Respiratory Society International Congress.

It was not known what the long-term effects on lung function were in children and young adults, but now, European scientists have found that there is no damage to lung function in this group after infection with COVID-19, the disease caused by the CCP (Chinese Communist Party) virus, also known as SARS-CoV-2.

“The COVID-19 pandemic has raised questions about if and how the lung is affected after clearance of the coronavirus infection, especially in young people from the general population with less severe disease. Until now, this has not been known,” Ida Mogensen, lead author of the Swedish study and a post-doctoral researcher at the Karolinska Institute, said in a news release Tuesday.

Mogensen and her team analyzed information collected from 661 young adults—born in Stockholm between 1994 and 1996—who had been participating in a large, ongoing study prior to the pandemic.

They were clinically examined pre-pandemic between 2016 and 2019, and again between October 2020 and May 2021, where lung function, inflammation, and white blood cells were measured.

Of the 661 participants, 178 or 27 percent tested positive for antibodies against the CCP virus, indicating they had been previously infected.

The researchers found that there was no difference in lung function between young people with a prior COVID-19 infection and those who had not been infected, and even participants with “asthma did not show statistically significant deterioration in lung function” except for “slightly lower measurements for the amount of air they could exhale forcibly in one second—known as forced expiratory air volume in one second (FEV1), which is one of the measures of lung function.”

“Our analysis showed similar lung function irrespective of COVID-19 history,” Mogensen said. “When we included 123 participants with asthma in the analysis, the 24 [percent] who had had COVID-19 tended towards having a slightly lower lung function, but this was not statistically significant.”

Mogensen said the findings were reassuring for the young adult population and added that more data from those with asthma and severe COVID-19 illness were needed.

Scientists from the University Children’s Hospital of Bochum, Germany, examined the long-term effects on lung function after infection with the CCP virus in participants aged 5 to 18 years between August 2020 and March 2021.

The study involved 73 patients who either tested positive for antibodies against the virus or had a positive polymerase chain reaction (PCR) test, and 45 participants without COVID-19 “but may have had some other infection,” acted as controls. Lung function tests conducted between two weeks and six months after infection were compared between the two groups.

When the researchers compared the two groups, however, they found “no significant differences were detected in the frequency of abnormal pulmonary function.”

“In children and adolescents, severe pulmonary complications are rare, even though 11.1 [percent] of our patients with symptomatic SARS-CoV-2 infection described dyspnoea with acute COVID-19,” the authors wrote.

“To our knowledge, our study is the first to compare pulmonary function in symptomatic and asymptomatic children and adolescents with and without evidence of SARS-CoV-2 infection; no difference between these two groups was observed. Even most patients with persistent respiratory symptoms did not show impaired lung capacity,” the authors added.

The severity of infection was the only indicator of the mild changes in lung function, “independent of a COVID-19 infection,” according to the lead author and specialist in pediatric and adolescent medicine Dr. Anne Schlegtendal.

“These findings should offer some reassurance to children, adolescents, and their families,” Schlegtendal said. “The discrepancy between persistent breathing problems and normal lung function suggests there may be a different underlying cause, such as dysfunctional breathing, which is a problem that has also been identified in adults.”