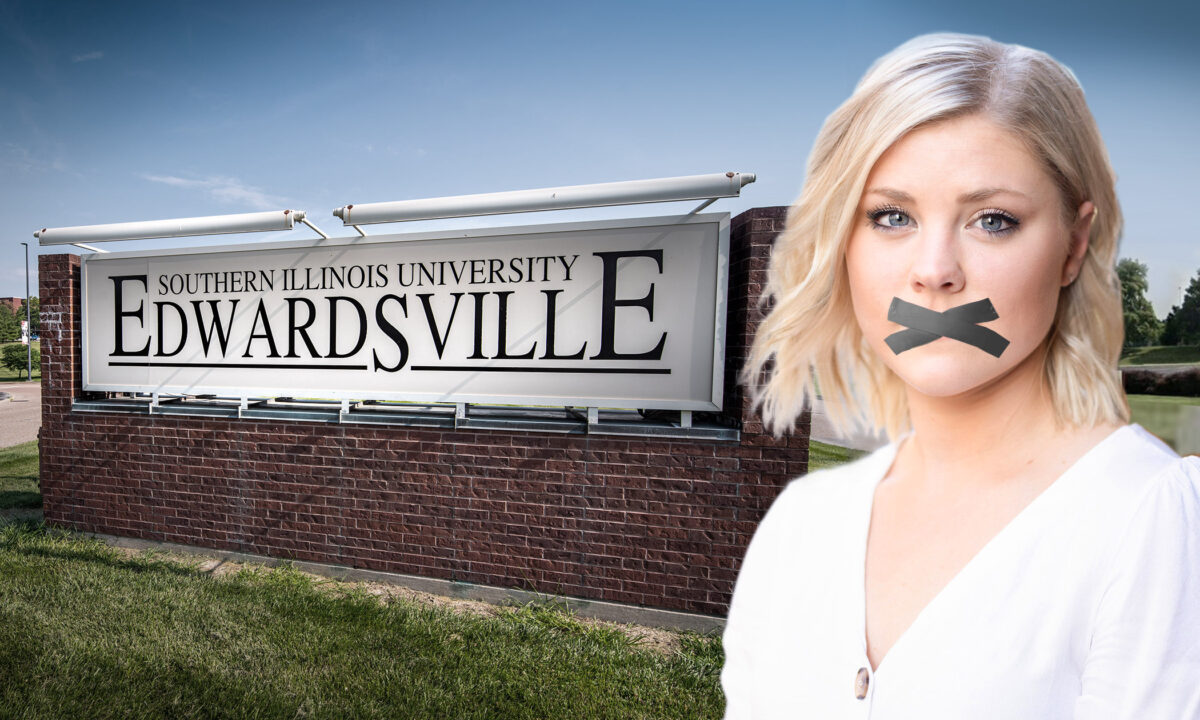 It got lively, boisterous—even explosive at times—as bright pupils with great expectations shared, tested, and contested ideas about the world. This was the university, the crucible of learning, the engine of ideas.

How times have changed.

Today, that experience has turned heavy (the crucible cold and unyielding) in many colleges and universities, where discussions are dampened by theories like postmodernism, putting a chill on that wistful classroom experience.

Few know this better than those who’ve been silenced.

The schools themselves are doing the silencing.

Because of her viewpoints on contentious issues facing America today, ones impacting the lives, livelihoods, rights, and security of countless individuals—such as abortion, defunding the police, and Black Lives Matter—the school took administrative steps to bring her bright mind to heel.

They slapped DeJong with a “no contact order,” the college’s equivalent of a restraining order, usually reserved for those threatening violence.

“There is a view that is becoming more prominent on campuses, that speech is ‘violence,’” DeJong’s attorney Gregg Walters told The Epoch Times. “You cannot issue an order saying your protected speech is a violation of some code of conduct.”

DeJong, along with the Alliance Defending Freedom, is now suing the school for violating her First Amendment rights to free speech and religious belief. Her Christian beliefs are part of what shape her worldview. DeJong is seeking a change in the school’s policy, vindication from the no contact order, and remediation for damages.

She was also denied due process.

“Even in the legal system, you get a chance to defend yourself,” added Walters. “She wasn’t given any type of hearing date to defend us, they were just issued.”

DeJong engaged in discussions in classroom settings, which was expected of her, in ways that were topically appropriate, discussions about “race relations,” “religion,” and “the postmodern theoretical framework,” she said. Until a student who didn’t like what she was saying made a formal complaint.

And her views were collected from social media for over a year. Classmates took screenshots from her Instagram as “evidence.”

“I was participating in these discussions, but they found views offensive that were from my Instagram that regarded pro-life discussions,” she told the newspaper, adding that those views were “conservative views that millions of Americans hold that are being discussed right now.”

“Proof” of ideological impiety in hand, administrators issued DeJong no contact orders preventing her from having any contact, direct or indirect, with three students, on or off campus.

“It’s the university’s version of a restraining order,” said Walters, adding that schools are not allowed to issue them. “Not in these circumstances. In other circumstances [it may be allowed], perhaps for protection against physical violence, threats of violence, sexual assault, sexual harassment, but when it comes to protected speech, absolutely not.”

Adding insult to injury, DeJong’s teacher followed up by sending an email to some 30 of her classmates, informing them she was being investigated.

This pressure successfully chilled her speaking, effectively silencing her from further discussion, even in the classroom.

“I was living in fear with my speech and so I was very scared to even defend myself, and so I remained very quiet,” she said, adding that she felt “sadness for what was going on.”

Punishment with such impunity flies in the face of university tradition: to seek truth. Now, the prevailing postmodern ideology holds that truth is relative; all discourses are constructs, tools of power; logic itself is a construct, a construct of the West, so logical debate can’t reach fruitful conclusions but can only serve the powerful, the privileged.

Only power struggles exist, between oppressor and oppressed.

“The more we talk about speech being ‘violence,’ the more we see extreme reactions to legal speech,” said Walters. “And in case of Maggie’s speech, there are millions of people that would agree with the positions that she took.

“To treat that as if it were something worthy of a no contact order is just absolutely wrong. It was protected speech, and universities cannot censor speech based on religious and political viewpoints.”

The university’s punitive approach to learning, he added, reinforces victimhood behavior rather than encouraging civil discourse.

“I went in with the mindset that it’s university, so diversity of thought should be welcomed,” DeJong added. “It should be a marketplace of ideas where you can engage in dialogue … where you’re truly picking things apart and learning, and learning from other people.

“Freedom of speech, the First Amendment, needs to be upheld within university systems so that students can fully engage in the marketplace of ideas.”