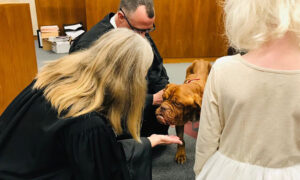 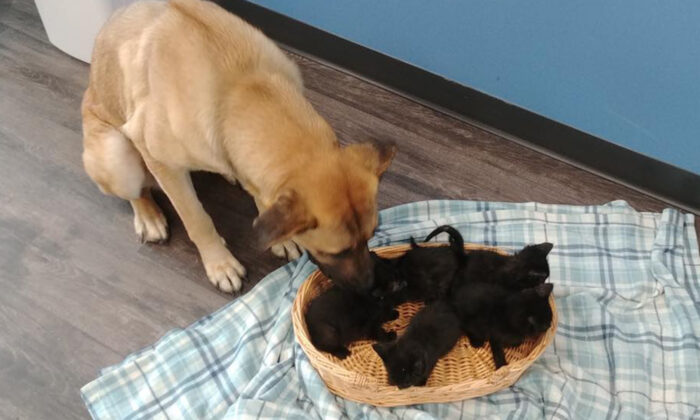 Driving through the snow in Ontario, Canada, a kindly citizen spotted something strange by the side of the road that made her pull over. A shivering stray dog was curled protectively around a small, furry black mass.

Upon closer inspection, the driver realized that the sweet stray had wrapped herself around five orphaned black kittens; she had surrounded them with her body to protect them from the biting cold.

The driver immediately called for help. Animal Control arrived on the scene and took the freezing pup and her five tiny charges to the Chatham-Kent Pet and Wildlife Rescue (PAWR) municipal shelter. By then, though, the dog and five tiny kittens were already inseparable.

The non-profit posted photos on Facebook on Nov. 16, 2019, showing the dog alongside the kittens that she refused to leave unattended. “Our stray sweetheart is keeping her ‘babies’ safe at the shelter tonight,” staff wrote.

“It’s truly heartwarming,” a shelter spokesperson later told The Dodo. “It had been a very cold night, so these kittens would have had a very hard time surviving.”

The kittens required treatment for flea and worm infestations, during which time the sweet stray dog paid the five tiny creatures regular visits to check on them. Staff named the dog “Serenity” in honor of her calm, nurturing demeanor and even made her a cake to commemorate her incredible act of kindness.

It was unclear to PAWR whether the dog and kittens had known one another prior to the night that they were discovered huddled by the side of the road. The shelter initially hoped that an owner would come forward, but nobody showed up for either Serenity or the kittens.

After treatment, the kittens were transferred to a safe, loving foster home. Serenity was spayed on Dec. 3, after which PAWR staff turned their attention to finding the lovely dog her new forever home by posting a heartwarming “advert” on social media.

“I’m obviously great with cats and would have no problem going to a home that has cats in it,” the Facebook post read, written from Serenity’s perspective. “I’m estimated to be about 2 years old so I’m still young and have the energy of a toddler. I love zooming around outside and will run circles around any person or object that is out in the yard with me.”

The shelter then addressed their decision not to home Serenity and the kittens together.

“The shelter staff is concerned about getting backlash for not adopting me out with the kittens that I was found with,” PAWR explained, “but the kittens are not old enough to be on their own yet. If they waited for the kittens to be ready, that would mean that I wouldn’t have my forever family for a couple of months.”

The post explained that the shelter’s goal is always to get animals in need to their forever homes without delay. “At the end of the day,” the post continued, “I am just happy that the kittens were found with me and are now resting peacefully in a warm foster home instead of outside in the cold.”

Thanks to Serenity, a potentially tragic ending for five innocent kittens was transformed into a safe and happy future. Serenity saved five kittens’ lives by using her own body to keep them warm and in turn warmed hearts around the world after her story went viral.

“Our staff sees many difficult situations on a daily basis,” a shelter spokesperson reflected, speaking to The Dodo, “and stories like this one make every heartache worth it.”