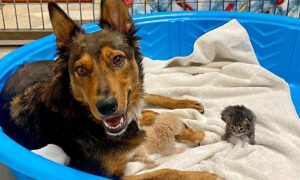 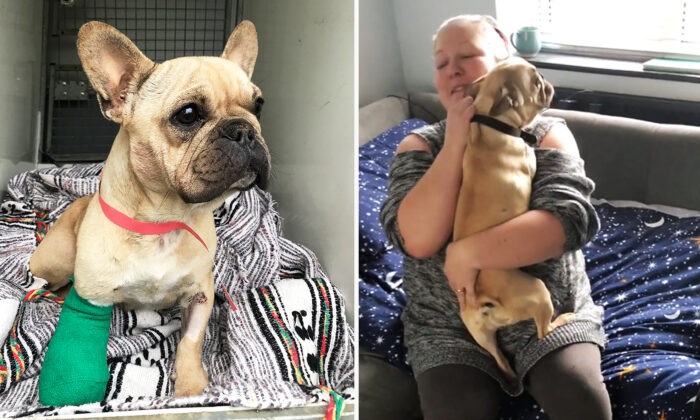 Stolen Dog With Injured Leg ‘Dumped Like Rubbish,’ Reunites With Family After 8 Months

A French bulldog that went missing from her home in March 2020 has been reunited with her family after a harrowing ordeal. The dog, Minnie, was found “dumped like rubbish” by the side of a cold canal with one leg badly injured.

Minnie, a 2-year-old pup, was found in Liverpool Road, Hapton, near Burnley, England, on Nov. 28, 2020, 170 miles away from her home. A woman walking her dog late at night called the RSPCA, who sent an inspector to retrieve the injured pet.

A severe wound on Minnie’s right front leg had been poorly bandaged, according to the RSPCA. An infection had destroyed the tissue, leaving the leg all but hanging off; and Minnie needed an emergency amputation.

Following the life-saving surgery at the RSPCA’s Greater Manchester Animal Hospital, the vet team scanned Minnie’s microchip and found that she had a family.

Mom of three Staci Day, from Moreton in Marsh, Gloucestershire, had reported Minnie missing eight months prior when she disappeared from the garden.

Staci feared Minnie may have been hit by a car on the busy road nearby, so she was quite shocked to receive the call that her pup was found and was going to be coming home for Christmas. The emotional reunion was caught on camera.

“It was great to see such a happy ending after all Minnie has endured,” RSPCA inspector Ryan King said. “She was so excited to see her family. As soon as I got her out of the van and started walking towards the house, she started pulling me as she knew where she was going.”

Heartwarming footage shows Minnie rushing toward Staci—who was overcome with emotion—with her tail wagging and enjoying a shower of love and cuddles.

“We don’t know where she has been for the past eight months but she has clearly been neglected and then to be dumped like rubbish at the side of a cold canal is just awful,” King said. “If the dog walker had not spotted her, I don’t think Minnie would have survived much longer.”

Staci’s three children—Joshua, 13; Ella, 9; Jacob, 6—claimed that their beloved Minnie’s return made for “a perfect Christmas.”

“We weren’t sure we would ever see her again when she went missing, so we are over the moon to have her back in time for Christmas,” said Staci. “It’s so sad she had been neglected and has lost her leg, but she doesn’t seem to be letting it bother her and she is back to her playful and loving self.”

Amid a surge in the “dognapping” of designer breeds like Minnie, an RSPCA spokesperson urged all dog owners to take extra precautions to deter thieves by neutering and microchipping their pets, and ensuring they wear a collar with up-to-date contact details engraved.

“We’d also advise that owners never leave their pets tied up outside shops or alone in cars,” they added, “ensure their gardens are secure with gates locked, and ensure their pet has a good recall and doesn’t stray too far when off-lead on walks.”