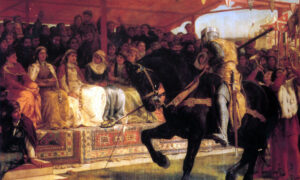 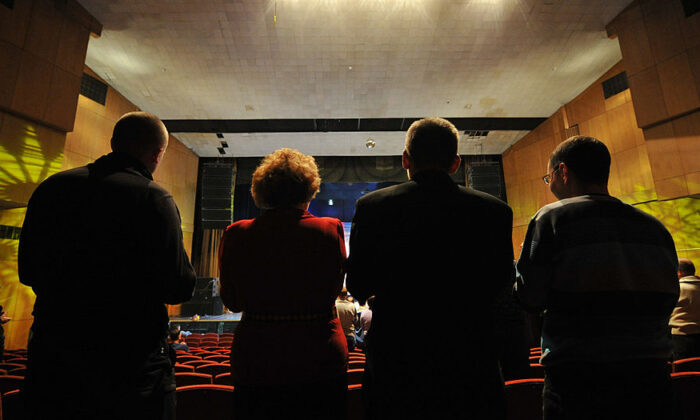 Members of Alcoholics Anonymous take part in a meeting in Moscow, on Dec. 1, 2012. (YURI KADOBNOV/AFP via Getty Images)
People

Stepping Stones to Sobriety: The Legacy of Bill W. and Dr. Bob

Some readers may recognize those names, but I suspect they are unfamiliar to many others. They are common names, unremarkable as a pair of old shoes.

And yet those two men, though unknown to so many people, launched a program that has saved millions of lives over the last 85 years.

Better known as Bill W. during his lifetime, Bill Wilson (1895–1971) grew up in Vermont. Raised by his grandparents after his parents divorced, an event that cast the 11-year-old boy into a deep depression, Bill excelled in school, graduated as senior class president, and intended to marry a classmate, Bertha Banford, whose unexpected death brought on a second bout of depression.

In 1918, shortly before shipping out for duty in the First World War, Bill married Lois Burnham, the daughter of a New York physician, a marriage that would last until his death 53 years later. On his return from the war, he found work on Wall Street, reporting on the status of companies to various brokerage houses.

It was then that he began his descent into alcoholism. His heavy drinking gradually damaged his professional reputation and brought on blackouts and depression.

One day, an old friend, Ebby, paid him a call. Through the then-popular Oxford Group, a loose fellowship of members and chapters that stressed such ideals as honesty, love, and purity, and which had led some to give up the bottle, Ebby had won his sobriety and urged Bill to do the same. Eventually, Bill followed his friend’s advice, checked into a hospital, and placed himself in the care of a psychiatrist, Dr. William Silkworth, who, unlike most other physicians of his time, believed alcoholism was more a physical addiction than a moral failing. While there, Bill also underwent a spiritual transformation, what he later called his “mountaintop” moment.

On his release from the hospital, Bill remained sober for nearly six months, but when an important business deal in Akron, Ohio, fell apart, Bill returned to his hotel, where he felt drawn to drown his sorrows in the establishment’s bar. Desperate to maintain his sobriety, he telephoned members he knew in the Oxford Group seeking help and was finally put in touch with Dr. Robert Smith, another man battling this disease. Though the doctor was reluctant to meet with Bill—he did so to please his wife—and though he expected their meeting to last only a few minutes, the two men ended up conversing for nearly five hours. Within another month, Dr. Bob, as he was later called, took his last drink.

And on that day, June 10, 1935, Alcoholics Anonymous was born, an organization that would save countless lives, marriages, and families from destruction.

In the next few years, Bill designed and wrote the Twelve Steps, a spiritual stepladder for the newly sober, the Twelve Traditions, a guide to hold the group together and to keep it focused on its mission, and “Alcoholics Anonymous,” also known as “The Big Book,” which explained the group’s philosophy and recounted numerous stories of alcoholics who had stopped drinking.

The driving principle behind AA and the writings of Bill Wilson was simple but brilliant: in numbers there is strength. As the “Big Book” puts it, “The feeling of having shared in a common peril is one element in the powerful cement which binds us together.” As the organization grew from a handful of people to hundreds of chapters, those with a long history of sobriety would act in the capacity of “sponsors,” advisers, and counselors to newcomers, available night and day if those in their charge needed help resisting the urge to drink.

The Twelve Steps were also simple in design but an excellent tool for those seeking sobriety. The admission of powerlessness over alcohol, the taking of a moral inventory, confession of failures to another human being, seeking help from a higher power: for many, these tactics worked in the battle against alcohol.

Yet another key factor in the growth of this program was anonymity. Alcoholism then—even today—carried a stigma, demonstrating weakness and a lack of moral fiber. Members used only their first names in meetings and were forbidden to discuss other members outside of those meetings.

Because AA doesn’t keep formal lists of its members, the numbers of groups and members are difficult to ascertain. The organization itself recognizes this fact, and estimates there are approximately 2 million members worldwide and over 125,000 groups.

People suffering from other addictions such as drugs, gambling, and sex have copied, sometimes in a modified version, AA’s Twelve Steps program.

All these programs, including AA, have brought words and phrases into our common speech such as “one day at a time,” “it works if you work it,” and “let go and let God.”

AA has its critics. In April 2015 issue of “The Atlantic,” for example, Gabrielle Glasser wrote “The Irrationality of Alcoholics Anonymous,” in which she attacked AA for its old-fashioned, unscientific approach to alcohol addiction. Though others disputed her findings, including this excellent rebuttal by Sarah Benton in “The Irrationality of A.A.? A critique of the recent Atlantic article,” Glasser scored some good points regarding alternative treatments for alcoholics.

All too often we try to make a situation either-or. In this instance, AA has helped many people stop drinking and has failed others. Instead of pitting the Twelve-Step program against other therapies or pharmaceuticals, why not encourage those seeking sobriety to find a program that works for them?

Credit Where Credit Is Due

Whatever the case, the fact remains that over 85 years ago, when the public understood little about alcoholism or how to treat it, two men came together and devised a program that has helped many people, that has saved lives, restored marriages and families, and allowed its practitioners to escape the bondage of booze.

And that’s an achievement worth celebrating.

A note: Most of the information about Bill Wilson I took from “Bill’s Story,” online at SteppingStones.org. I encourage readers interested in his life to read more about him there.