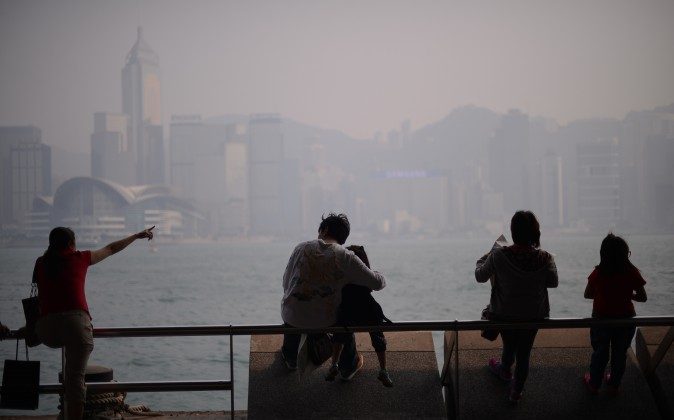 People sit in front of the city's skyline shrouded in a dense blanket of toxic smog in Hong Kong on April 15, 2013. (Philippe Lopez/AFP/Getty Images)
Health

One of the most widely prescribed drugs in the United States may have an extra benefit: protecting people from air pollution.

“Health impacts from spikes in particulates in the air are substantial. Statins seem to protect not only lungs from these impacts but the heart, too,” said Dr. Norman Edelman, the American Lung Association’s senior medical advisor.

About one in four Americans over the age of 45 takes statins, including Lipitor, Zocor and other brand names.

Although drugs cannot be prescribed to protect people from air pollution, several studies show that people who take statins have fewer proteins in their blood that indicate inflammation of tissues, said Dr. Stephan van Eeden, an associate professor at the University of British Columbia who specializes in lung health. This inflammation may aggravate respiratory and cardiovascular diseases.

Most recently, a study of 1,923 U.S. women found that those taking statins are less likely to have signs of inflammation, said Bart Ostro, an epidemiologist with California’s Office of Environmental Health Hazard Assessment who led the study.

“There are some specific groups [such as diabetics] that seem to have higher levels of inflammation after long-term exposure,” Ostro said. “On the converse side, we found that people on statins seem to be protected from the inflammatory effects of PM2.5.”

In the women taking statins, there was no association between PM2.5 – the tiny particles emitted mostly by burning diesel and other fossil fuels – and the proteins indicating inflammation, while for most of the other groups the links were quite strong.

It’s not the first time researchers have noticed this link: University of Michigan researchers found decreased blood indicators of inflammation in people who took statins in a study of 92 people in Boston. A national study of 5,778 people also reported that statins canceled out the presence of signs of inflammation from PM2.5, carbon monoxide and nitrogen dioxide.

Scientists believe that inflammation is a key factor in heart disease.

“The older thinking was that plaque in coronary arteries caused heart attacks,” Edelman said. “Now the thinking is that it’s also due to some living tissue under plague that gets inflamed and that disrupts the plaque. We already knew statins ameliorate heart disease, and always thought it was through lipids, but here’s a new pathway.”

Around the world, studies have shown that whenever particulates increase, deaths from heart attacks and respiratory disease rise, too. Experts estimate that fine particles are linked to about 800,000 deaths annually worldwide.

Particulate pollution has been on a steady decline in the United States: The national average for PM2.5 decreased 34 percent from 2000 to 2013, according to the Environmental Protection Agency. However, high concentrations of the pollution still persist in some cities with heavy traffic and industry, such as Los Angeles and Chicago.