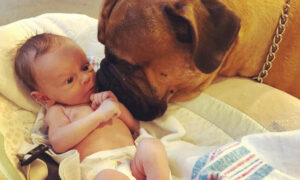 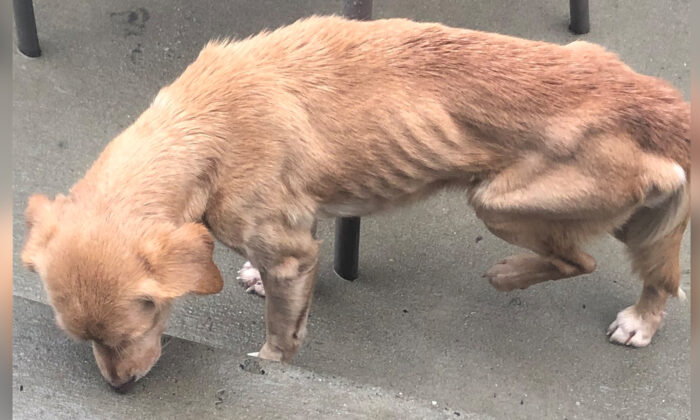 Philadelphia resident Jack Jokinen took his dog, George, out for a walk one evening and returned home just as a serious storm was brewing. That night, Jack failed to lock his front door somehow, and little did he know that the howling winds would blow it right open in the wee hours of the morning.

Then, Jack’s wife, Emily Jokinen, who woke up to feed their newborn baby, got a startling surprise: a strange dog was in the house! She woke her husband, who then swept the house to make sure no human intruders were there and found none; except the dog was there.

As he told The Dodo, “[W]hen I finish, I think, ‘How did this happen? A magical puppy?’” What the parents didn’t know was that at around 3:15 a.m., a hungry stray dog had wandered by their house, seen the open door, and entered seeking shelter; and a little later, a neighbor noticed the open door and closed it with the pup still inside.

The Jokinens didn’t know what to do but felt responsible to ensure that the needy pooch wasn’t sent off homeless. “She was emaciated, teeth all over the place, only walking on three legs with no collar,” Jack Jokinen told Inside Edition.

After calling Animal Control, they were told that they could “surrender” the dog to the local pound, where she would be put in the system as a stray, which didn’t sit well with them. After checking for a microchip (they didn’t find one), they soon came to the conclusion that the dog’s previous owner was probably a “terrible person” for starving her anyway.

That’s when they decided to adopt her, and they named her Suzy. “We decided that of all the bad things that could happen by leaving your door open in the middle of winter in a major city, to end up with a sweet dog who has come off the street … We have to at least give this a try,” Jack told The Dodo.

“She’s a senior dog with a lot of health issues so we’re going to nurse her back to health and give her the best life possible,” Emily told Inside Edition. Among Suzy’s health problems were decayed teeth, an injured paw that had her walking on three legs, and lots of ticks and fleas.

The internet came through in a big way after Jack took to Twitter to tell Suzy’s amazing holiday story. “Some people said ‘If you can’t take this dog, I’ll take the dog, she looks scared.’ Others said ‘If you need money to help with that dog, we’ll send money,’” Jokinen told TODAY. He eventually received $15,000 in donations through his Venmo account.

Now that Suzy has settled in to her new home, she’s been gaining weight and has become best friends with the other canine of the house, George. She has become incredibly attached to her new family, especially dad Jack, and cries when he isn’t there. The family thinks she is the perfect Christmas gift.