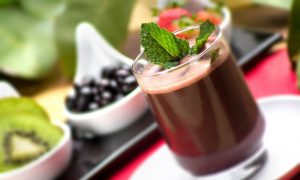 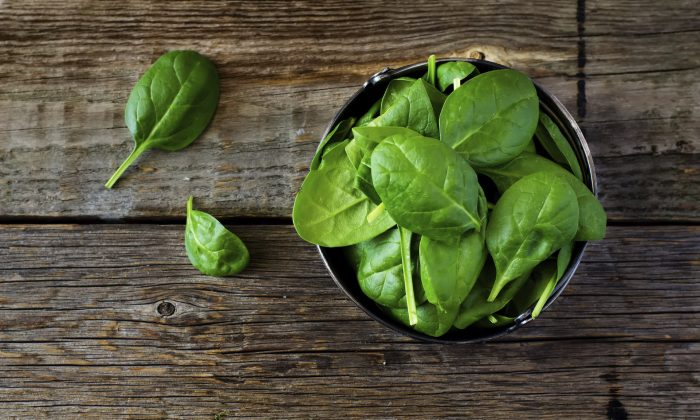 Spinach is one of the greatest super foods. It is a rich source of vitamins A, B2, B6, C, E and K; magnesium; manganese; folate; iron; calcium; potassium; folic acid; copper; phosphorous; zinc; niacin; selenium; and omega-3 fatty acids.

It contains good levels of protein, is packed with phytonutrients (potent substances that have been shown to fight cancer), and contains lutein, which studies have shown protects against macular degeneration and cataracts.

It also contains a carotenoid called neoxanthin, which has been shown to lower incidence of breast cancer in women, and prostate cancer in men.

The folate content in spinach is beneficial for protection against heart disease. High levels of folate help neutralize the harmful effects of homocysteine, which raises the risks of both heart disease and stroke.

The high levels of calcium and vitamin K can reduce the risk of osteoporosis in women. Spinach is so packed with nutrients that  it is highly recommended for pregnant women.

It is also a powerful anti-inflammatory, so it is excellent for arthritis sufferers.

Though spinach is also a good source of iron, it is nowhere near as good as most people think. This is due to an error made by Dr. E. von Wolf, who originally classified the nutrient value of spinach in 1870. Unfortunately, in his notes he misplaced a decimal point, and thus spinach was thought to have 10 times its actual iron content. The mistake wasn’t discovered for 70 years or so.

However, iron aside, not many foods can pack all that punch. Spinach is related to chard, beets, and sorrel, and comes in many different varieties.

Swamp Spinach. If you are lucky enough to live near an Asian supermarket, you should try swamp spinach (also known as kangkong). This variety is just as beneficial as the conventional supermarket ones but is quite a lot cheaper since it does not need to be cultivated.

It comes in big bunches and looks a little like long, thin pak choi. It is eaten all over Asia.

These are the more common varieties that you will find in supermarkets:

Smooth Flat Leaf. This variety usually comes washed and ready to eat. It is excellent eaten raw in salads and wilted to serve as a garnish.

Semi-Savoy. Crinkly edged yet similar to a light cabbage leaf, this variety lends itself to being used as a side of green vegetables with a meal or tossed into a stir fry for a few seconds at the very last minute.

Savoy. This variety is the hardiest and is best-suited for shredding and adding to bold soups such as ribollita or pistou. It needs a good washing, as the wrinkles in the leaves gather a lot of grit and soil.

Whichever type of spinach you use or whatever the dish for which you use it, there is one fundamental rule to using spinach. If you are cooking with it, you must not cook it longer than 20–30 seconds.

In restaurants, this is known as “al minuto,” which means “to the minute.” If you don’t exceed this, then you will have bright, vibrant, tasty spinach with lots of color and texture.

However, if you cook it for too long, you will end up with mushy, bitter-tasting brown sludge that will have all the appeal of canned spinach.

Food of the Powerful

The first recorded instances of spinach being consumed as a vegetable date back to 7th century China, long before it became popular in the courts of Europe.

It was particularly popular among the Italian aristocracy. Catherine de Medici (the Medicis were a very powerful medieval family in Florence in the Middle Ages) was so fond of spinach that when she married the king of France, she brought her own chefs to cook it the way she liked it.

Since then, dishes served on a bed of spinach have been known as “a la Florentine.” As far as vegetables go, nutritionally speaking, spinach is hard to beat. Wilted in a wok, in a little olive oil or butter, with black pepper and a little grated nutmeg—what’s not to like?

Michael Edwards writes for Organic Lifestyle Magazine where this article was originally published.