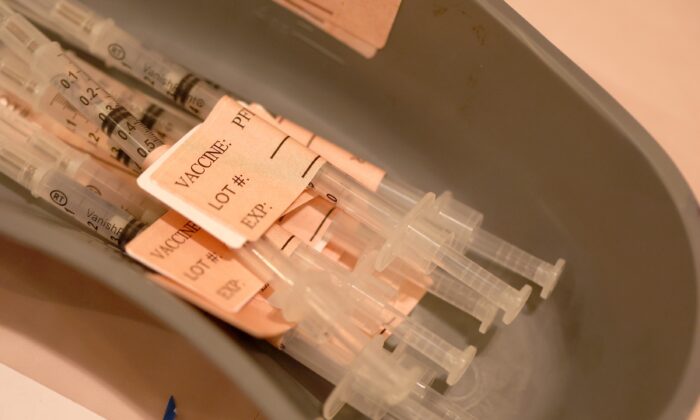 Some Vaccine Injured Getting Better While Others See Little Improvement

Some people who experienced adverse reactions to the COVID-19 vaccines are recovering from their injuries after spending months working to find treatments, though others have seen little improvement.

Dr. Danice Hertz, who was diagnosed with an adverse reaction to Pfizer’s COVID-19 vaccine, has had ups and downs since getting the jab in December 2020. During one of the more recent stretches, she was “constantly in horrible pain.”

That changed in February, when she began infusions of immunoglobulin, or antibodies, a type of protein that helps protect the immune system.

“That’s what my doctor recommended, and it’s really helped me,” Hertz, a retired gastroenterologist who lives in California, told The Epoch Times. “I would say it’s at least 50 percent improvement, maybe a little more than that.”

The drug is being covered by Medicare, as Hertz recently turned 65.

Hertz isn’t the only person to have responded well to immunoglobulin, which can be administered intravenously (IVIG) or subcutaneously (SCIg).

Brianne Dressen, who suffered severe neurological problems after getting AstraZeneca’s COVID-19 vaccine on Nov. 4, 2020, was advised by an expert in Germany to try the drug.

The expert also said two other treatments could work: rituximab, a monoclonal antibody typically used to treat autoimmune diseases, or plasmapheresis, an elaborate process that involves removing blood from a patient, separating the plasma, and returning it to the same patient.

The recommendations eventually led to Dressen getting IVIG at the U.S. National Institutes of Health (NIH) in Maryland in June 2021.

“IVIG and plasmapheresis are standard treatments for immune-mediated neurological diseases where an underlying immune process is suspected and acute in nature,” Dr. Avindra Nath, a senior investigator at the agency and part of the team that treated Dressen, told The Epoch Times via email.

Nath has said he believes side effects following vaccination are immune-mediated, or the result of an irregular response by a person’s immune system, and that treatment with therapies that modulate the immune system may be the best approach to resolving the issues.

Dressen felt better after receiving IVIG. But the Utah resident saw her heart rate shoot back up and other symptoms return after flying home.

She tried to obtain the treatment locally. IVIG is expensive and difficult to get in the United States.

Dressen was eventually administered the treatment as a test of effectiveness. It sent her heart rate down again. That convinced her health insurance to cover the treatment and doctors to give it regularly.

“It’s helping a lot,” Dressen, who helped start React19, a nonprofit that aims to offer support for people suffering from lingering effects that stem from adverse reactions to COVID-19 vaccines, told The Epoch Times.

“There’s people in our group that, obviously, they can’t get it, there’s no access to it,” she added. “Those are the ones that are like ‘I just want to die, I can’t do this anymore’ because they’re being tortured all the time. That’s really sad.”

Over 807,000 people in the United States have experienced side effects from the COVID-19 vaccines, according to reports submitted to the Vaccine Adverse Event Reporting System, a federally-run passive reporting system. Some reactions are minor, but not all. Some are reported to have led to death; others to debilitating disabilities.

Patients looking for treatments for vaccine injuries have often run into difficulties. They typically have to see multiple specialists, who can be reluctant to link any conditions with a vaccine. In the end, many of the drugs prescribed prove ineffective.

A lack of federal guidance on treatments for serious vaccine reactions has left some patients disheartened. They feel that’s had a chilling effect on doctors, and contributed to problems getting insurance to cover treatments like immunoglobulin.

Seeking more information, patients have formed groups like React19, usually connecting through the internet. Peers have helped collect studies, patient reports, and other information regarding possible treatments for dissemination. A small number of researchers are studying the problems and potential solutions.

Kristi Dobbs saw her immunoglobulin G (IgG) levels plunge after suffering what was diagnosed as an allergic reaction to Pfizer’s vaccine in early 2021. She dealt with symptoms like nerve pain, heart palpitations, and seizures.

The symptoms eased after she saw a functional medicine doctor, who concluded Dobbs had mast cell activation syndrome—a common diagnosis for people who suffer adverse reactions to the vaccines—and prescribed supplements and a dramatic dietary change, advising his patient to cut out dairy, gluten, and sugar, and minimize histamine.

But the IgG levels remained low, and some symptoms lingered, prompting the Missouri resident to seek SCIg, which helps replenish the antibodies.

Dobbs received a letter in the mail in April from her insurer saying the company had decided to cover the treatment. But days later, the insurer said the request was being denied because it was not deemed medically necessary.

“Needless to say, I am sad, mad, confused, and most of all let-down, due to the fact that I have advocated to prove my vaccine injury for so long, and I finally have all the tests to prove my injury and then the door to health is slammed in my face,” Dobbs, of Missouri, told The Epoch Times in an email.

Dobbs was in contact with NIH scientists, including one who said she had a “vaccine reaction,” according to emails reviewed by The Epoch Times. They said she was likely suffering from immune-mediated small fiber neuropathy, a neurological disorder, and/or nerve dysfunction, with steroids or IVIG being the best treatments.

Dobbs feels she was let down by the government, a common theme among the vaccine injured.

The National Institute of Neurological Disorders and Stroke, part of the NIH, has confirmed it treated about 10 patients with suspected or confirmed vaccine reactions. It has said it submitted a paper with the details of the workups, but that paper has not yet been published.

Asked what treatments he’d recommend to those with vaccine reactions, Nath, the clinical director of the institute, declined to answer.

“It will require clinical trials to identify the best modes of treatment,” he said.

The government has been conducting trials of certain issues triggered by the vaccines, including allergic reactions.

Immunoglobulin Helps, at Least for Some

Immunoglobulin is perhaps the most promising treatment for vaccine injuries. They have been used in the past to treat neurological problems such as Guillain-Barre syndrome as well as blood clotting, two known post-vaccination issues.

The therapy “is used in the treatment of a wide variety of diseases,” researchers wrote in 2015, reporting that the treatment was becoming more expensive and shortages were appearing.

The pooled antibodies are believed to work by neutralizing anti-PF4 antibodies, which cause clotting, among other mechanisms.

Dr. Masatoshi Inoue, of Tajimi Hospital in Japan, treated a middle-aged woman who was diagnosed with SCLS, a rare syndrome, after receiving Pfizer’s shot, with IVIG. The treatment appeared to help initially, Inoue and colleagues reported. The woman had to stop the treatment due to financial reasons but after she returned to the hospital with generalized malaise and elevated hemoglobin levels, more IVIG improved the symptoms, Inoue told The Epoch Times in an email.

“We believe IVIG is effective for SCLS,” Inoue said. At the same time, “We have not seen indications that IVIG worked well against other health issues recorded following COVID-19 vaccination.”

The drug is one that helps recalibrate the immune system, which is needed after reactions, Dressen said.

Her heart rate was normal when she got vaccinated as part of a clinical trial but shot up afterwards, according to Apple Watch data. The first time she received a five-day course of IVIG, her heart rate dropped. It dropped again after she started receiving the treatment regularly.

Still, what works for some has not worked for all patients who have received it. And immunoglobulin has side effects, such as headache, fever, and blood clotting.

“There’s still a high-risk profile. And that’s what’s really unfortunate with all of the treatments that are available to us, is all of them have very dangerous side effects that accompany the medication,” Dressen said.

The Centers for Disease Control and Prevention, which describes itself as the nation’s health protection agency, primarily in its messaging promotes vaccination, with little focus on side effects. Serious reactions are repeatedly described as rare, even afflictions seen at higher rates following vaccination than with COVID-19 infection. The agency did not respond to a request for comment for this article, nor did the Food and Drug Administration, which authorized the shots. Pfizer and Moderna have not returned inquiries regarding side effects.

In a recently completed survey of 508 React19 members, just 35 percent said they’ve been getting better over the past six to eight months. The most common answer, when asked what was helping with symptoms, was time, followed by rest, supplements, and gentle exercise.

IVIG was listed, but only by three people. Steroids, the antiparasitic drug ivermectin, antihistamines, and the nerve pain drug gabapentin were also named by some.

Nikki Holland, who suffered a suspected vaccine reaction, hasn’t experienced a breakthrough for a while. She was in and out of hospitals in 2021 with symptoms including difficulty breathing.

Holland, who has also experienced neurological issues, had not heard of IVIG.

Many patients who have improved still deal with a variety of symptoms.

Skylar Bush, an Oregon resident who was diagnosed with a severe allergic reaction to Moderna’s vaccine after receiving the shot in April 2021, has dealt with lingering symptoms like dizziness to this day.

What has helped Bush the most was electric shock therapy involving low levels of shock while the patient is doing muscle movements, vision therapy, a good diet, and meditation.

“No silver bullets yet, though,” Bush told The Epoch Times.

Depression has set in at times, especially when symptoms surge back.

“There’s only so much your mind can take, so I think I’ll start to see a psychologist soon,” Bush said.