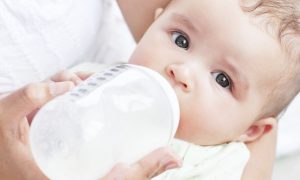 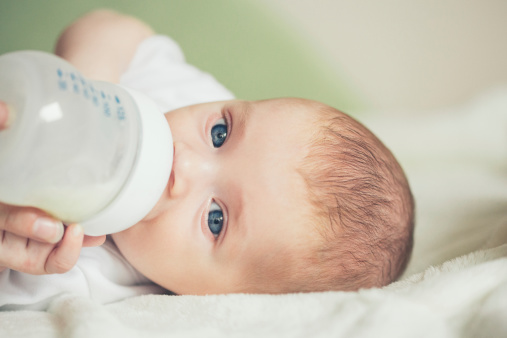 Too much sugar in infant formula can lead to children craving unhealthy amounts of sugar. (LuminaStock/iStock/Thinkstock)
Mind & Body

Some formula milk has double the sugar per serving than a glass of soda. That was the key finding of our global investigation into the sugar content of infant formula and follow-on milk. But perhaps more shocking is the fact that there are so few regulations in place to control the sugar content and to make sure consumers are well informed.

We all love sugar. But too much of the sweet stuff can lead to obesity, Type 2 diabetes, and dental disease. Our preference for sugary foods stems from our primitive ancestors, who were scavengers and sought out sweet foods for energy. But if we are hardwired to like sweet foods, being fed lots of sugar as babies can increase our desire for sweet things and increase the risk of developing disease in later life.

Breast milk is the recommended source of nutrition for infants, especially during the first six months of life. Although it is sweet and high in energy, the sugar is mainly lactose and the content is specific to the needs of the growing infant. Conversely, infant formula milk has a standardized make-up and contains added sugars such as corn syrup which are added during production and are not found in breast milk. This is bad for babies because high consumption of added sugars may contribute to tooth decay, poor diet and lead to obesity in children.

We investigated the sugar content of 212 commercially available infant formula milk products targeted at infants under three. The products were being sold in supermarkets in 11 countries. We collected data on sugar content from nutrition labels and compared it to average breast milk compositions and sugar content guidelines. We also noted the clarity of the labels and the marketing strategies used on the packaging.

This comes at a time when sugar-sweetened beverages have been subject to widespread taxation to reduce their sugar content due to negative impacts on health. As a result, many formula products included in our study contained almost double the sugar of well-known drinks such as Fanta Orange.

Obtaining information from the labels of these formula products was difficult as the fonts used were small and the facts provided varied between countries. For example, some products listed sugar content per 100g while others listed it per 100 calories (kcal). This is despite guidelines, such as those in the United Kingdom, which state that values should be expressed as kJ/kcal per 100ml (3.38 oz.).

There are also codes in place to limit the marketing of infant formula products because they are not the best way to feed a growing baby. But most of these are voluntary codes of practice that manufacturers do not have to abide by.

Even guidelines that are enforced by law can be side-stepped by manufacturers since they are not strictly monitored and have loopholes. In some cases, manufacturers themselves have even influenced their development.

For example, it was revealed that the industry has funded research into infant health and has given doctors free formula products. This almost certainly helps ensure that their sale is affected as little as possible by such guidelines. It is possible that the sale of infant formula products has increased worldwide as a result.

The World Health Organization’s International Code of Marketing of Breastmilk Substitutes stipulates that infant formula products should not be promoted over breastfeeding. In the U.K. the guidelines state that the labels on products targeted at infants under six months should not include images of infants or any other pictures that idealize their use.

But we found that many of the formulas had labels that included images of infants or cute toys of animals, presumably designed to entice caregivers into buying. Such findings are not unsurprising as there is evidence that harmful marketing strategies have been used extensively by infant formula and follow-on milk manufacturers.

Our findings are alarming, as is the potential negative impact of the high sugar content on the health of babies. We urge parents and caregivers to opt for breast milk whenever possible. However, to help those families unable to breastfeed their babies, we also have two key recommendations for policymakers:

1) Regulate the amount and type of sugar in infant formula products as a matter of urgency. Encourage manufacturers to aim for formulations as close to breast milk as possible. Such regulations could be conducted in a similar way to the taxes on sugar-sweetened beverages that have been implemented across the world.

2) We are also calling for the mandatory disclosure of added sugar by manufacturers and suggest that this could be implemented alongside the introduction of a clear front-of-pack labeling system. Such disclosures and clear labeling could aid consumers to make informed choices about what products they purchase.

Gemma Bridge is a doctoral candidate at Leeds Business School at Leeds Beckett University in the UK. This article was originally published on The Conversation.