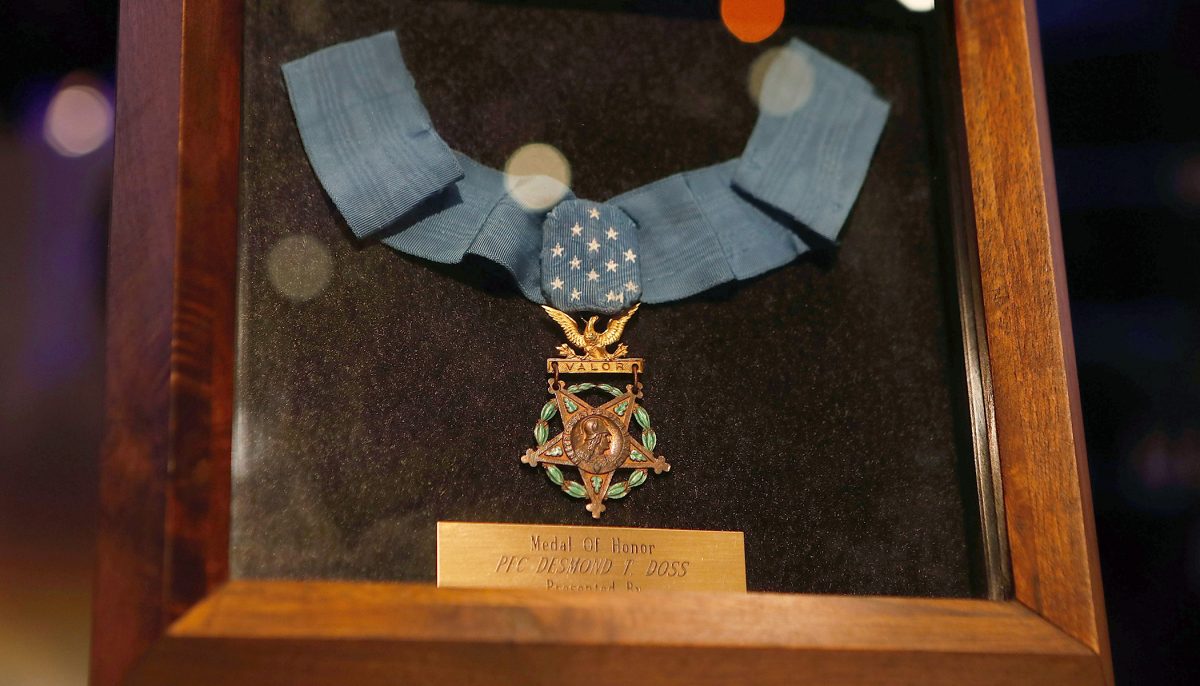 World War II hero Desmond Doss was a soldier who refused to fight or even carry a weapon. Labeled a “conscientious objector,” Doss had enlisted during the draft in April of 1942, but he declined to bear arms. He nevertheless was awarded the Medal of Honor for his actions during the battle at Hacksaw Ridge, in Okinawa, where he was credited for saving the lives of 75 men.

As Doss was a devout Seventh Day Adventist, his belief in the sixth commandment, “Thou shalt not kill,” and the fourth commandment, “Keep the sabbath day holy,” prevented him from fighting. He alternatively chose to serve as a medic; as “Christ healed on the Sabbath,” Doss figured, it would be alright to serve seven days a week. Seventh Day Adventists consider the Sabbath to be Saturday.

Doss was just 23 and was working in a shipping yard when he was drafted. He got married to his girlfriend just prior to active duty.

“Conscientious objector” status is given to those who object to fighting on moral or religious grounds. Their religious rights not to fight are thus protected. Yet, Doss faced abuse from soldiers during his training because of his belief—including for his refusal to use weapons; even the thought of killing put “horror” in his heart, he once said—an officer even once tried to have Doss discharged as mentally ill, according to the New York Times.

Doss shipped out to Guam and the Philippines, where he served as a combat medic and was even awarded a Bronze Star for heroism.

Perhaps the most memorable day of his service came on a Saturday—his Sabbath day—May 5, 1945, during the battle of Okinawa. Doss scaled a towering 400-foot cliff, dubbed “Hacksaw Ridge,” alongside his comrades when the Japanese opened fire on them with machine guns and flamethrowers. There was nowhere to escape. Doss, who refused to take cover, tended the wounded. He carried them one by one to the cliff’s edge and lowered them, using a makeshift litter tied to a tree stump, down to friendly forces below.

Uninjured, Doss then climbed down, himself.

Although credited with saving over 75 men, Doss says the actual number is closer to around 50, according to Daily Mail.

In the weeks that followed, Doss’s legs were injured from a grenade blast, during another attack, where he demonstrated yet more heroism by placing the needs of others before his own.

Doss was eventually presented the Medal of Honor by President Harry Truman on Oct. 12, 1945, for his bravery during the battle of Okinawa.

“Through his outstanding bravery and unflinching determination in the face of desperately dangerous conditions Pfc. Doss saved the lives of many soldiers,” reads his Medal of Honor citation. “His name became a symbol throughout the 77th Infantry Division for outstanding gallantry far above and beyond the call of duty.”

In the years that followed, Doss devoted himself to church work, helping youth in Georgia and Alabama—as he was unable to work steadily due to his physical condition.

The heroic conscientious objector and Medal of Honor recipient passed away from a respiratory ailment in March of 2006 at the age of 86.