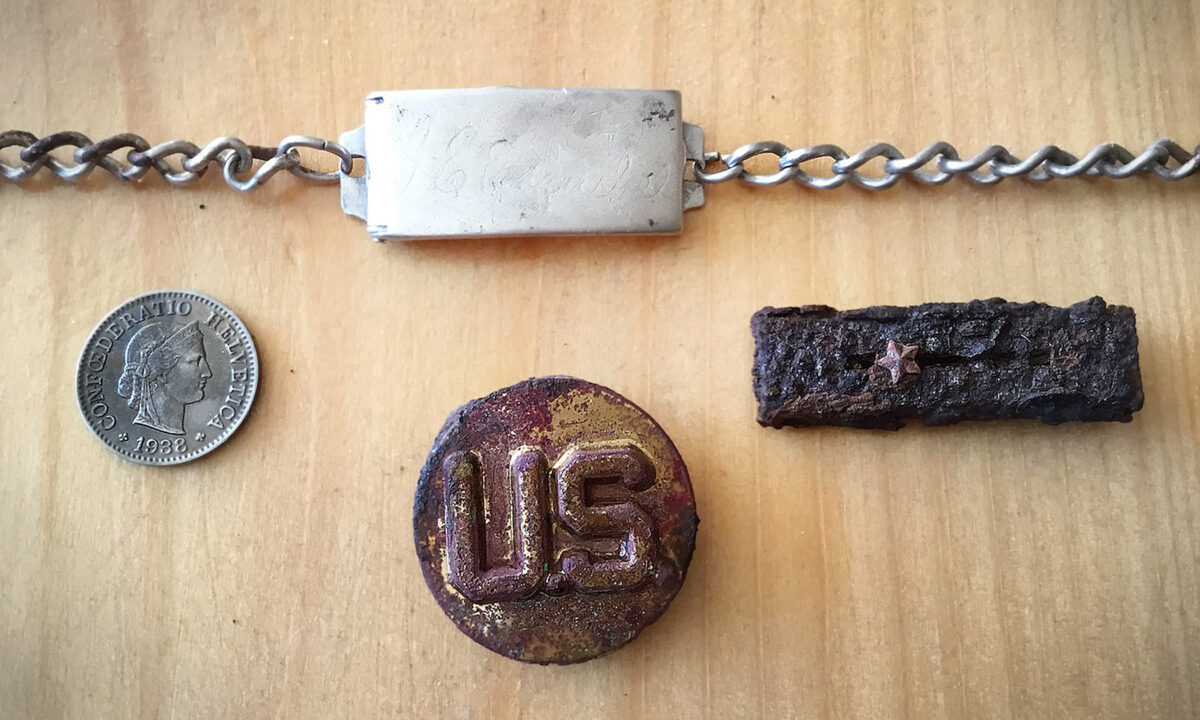 A metal detectorist catching a glint of silver in the woods this past fall led to the completion of an epic WWII tale over seven decades in the making.

Roughly 76 years ago, a U.S. soldier lost a silver bracelet of sentimental value in a forest in what was then Czechoslovakia. For many years, the endeared item and other effects lay hidden, estranged from their owner.

Fierce fighting in Europe and the loss of many friends led to that soldier guarding a prisoner of war camp where 3,500 Germans were being held. It was there that his pack, containing a pistol, the silver bracelet, and other war apparel, was stolen.

Eventually U.S. forces handed the camp to their communist Red Army allies, and in 1946, this particular soldier, originally from New Mexico, returned home and married his love. They had three children, and he had all but forgotten about his lost possessions.

He and a friend, seeking adventure, trekked into those woods despite skepticism about finding anything interesting, as the area had been thoroughly scoured and picked clean of war relics—or so they had thought.

“I wanted to really enjoy it. Little did I know that I would find a story that day that would literally change my life,” Svihovec, a 47-year-old TV editor, told The Epoch Times of the epic quest’s beginning. “I went to a former prisoner-of-war camp near Marianske Lazne to try our luck with a metal detector. That was the third time that year.”

Not long into their hunt, Svihovec’s metal detector sounded. He got down, burrowed into the ground, and exposed a collar pin with the letters “U.S.,” a tattered service ribbon with a bronze star, and a 1938 five-franc Swiss coin.

“I understood that I had discovered things after an American soldier from the war,” Svihovec told the newspaper.

Exhuming the U.S. Army artifacts, he tried his metal detector again and the signal persisted. He then extracted a silver bracelet.

“I noticed the inscriptions on the bracelet, the signature of the soldier, and the name of his girlfriend: Lydia,” Svihovec said. “I sat down by the tree and studied the bracelet for a long time. My heart was pounding.

“I felt a special desire to find out who [owned it]. It occurred to me that the soldier had some descendants, and that I should return the bracelet to them.

Back home, after washing the silver adornment and trying unsuccessfully to make out the markings, he turned to Facebook. A treasure-hunting group spent a day helping decipher the inscription by using various photo filters, magnifying glasses, and other implements.

“We tried about 30 surnames,” Svihovec said. “And then it occurred to me to try the surname Esquibel. It turned out to be quite common.”

Coupling the inscribed names together and Googling “Lydia Esquibel” yielded a match: a woman born in 1926 who died in 2019, survived by her husband, Joe Esquibel. Flabbergasted, Svihovec shared this on Facebook and soon was contacted by historian Daniel Malý from nearby Pilsen, Czech Republic.

“It was the same as on that bracelet!” Svihovec said.

He only hoped Joe was still alive.

Svihovec didn’t relinquish hope after being stonewalled by the Pentagon and U.S. Embassy in Prague, but again enlisted help on Facebook. A number of netizens took up the challenge—including a member of a Facebook group for Czechs living and working in the United States, Alena Busovska, who lived in Grand Junction, Colorado.

“That’s where Joe was supposed to live!” Svihovec said.

Busovska wrote him and said she would attempt a rendezvous with the Esquibels’, despite her shaky English.

“I think hundreds were looking at this post,” she told CPR News. “I had to come out of my shell and try, even [if] it’s not perfect.”

Busovska even met Joe and showed him pictures of the bracelet, and memories of it came flooding back to him.

“Tears welled up when I received a photo of a war veteran holding my printed email,” Svihovec said. “I couldn’t catch my breath. I was so happy.”

But the long journey, 76 years in the making, wasn’t over yet, for the bracelet’s finder would have it returned to its rightful owner.

The U.S. Embassy helped him connect with the Marine Corps, and they were thrilled by the find, Svihovec said. At the embassy, he returned the veteran’s lost effects, shared his own story with the grateful Marines, shook hands, and received their thanks.

At last, the bracelet was shipped home via diplomatic mail.

“I honestly think my mom made this happen,” said Joe’s daughter, Jolene Esquibel-Archuleta. “Our faith is very strong.

Video footage of the bracelet back on Joe’s wrist made its way to Svihovec—who said the tale still amazes him.

“I’m glad it just happened to me. It’s like a beautiful movie, but it really happened,” he said.

Joe, who once served in the 318th Infantry under legendary Gen. George Patton, according to The Daily Sentinel, expressed gratitude, telling Svihovec, “Well, I thank you many times.”

But the “beautiful movie” hasn’t ended. Svihovec hopes to soon meet Joe, shake his hand, and hug him.

“I want him to tell me about Lydia, the war, and his life,” Svihovec said.

If all goes well, that will happen sometime this year, he said.